PC News American Conquest Trailer
The english trailer of American Conquest is online. Get a peek at the huge battles you`re going to face in the most EPIC RTS game ever. American Conquest offers historical combat in a much larger scale than any other game of its kind. The game also respects the importance of details such as troop morale, 3D terrain and rate of fire. The trailer is available in different formats including RealMedia, DivX and Mpeg: Download

Soldiers Of Anarchy Revealed
PC developers Silver Star have revealed more details on its upcoming tactical RTS, Soldiers of Anarchy. According to the press release, "Soldiers of Anarchy features vast level designs, options to plan and enact realistic military manoeuvres, a stunning arsenal of realistic weapons and army vehicles and sophisticated AI. Combine this with the most comprehensive level editor ever and you have an detailed RTS game that will challenge and excite any fan of the genre." Release Date: February 2003

Soldiers of Anarchy features 13 levels stretching across a 2 x 2 km mesh, each in different locations such as arid jungle, desert, city and arctic regions. Each level contains varied tactical missions, which are sub divided into multiple tasks and objectives. The single player mode features a tutorial and story mode. Player's can also play against 12 people in the multi-player mode, on a local area network or over the internet. Play co-operatively by attacking other teams or battle it out against each other.

A diverse arsenal of weapons and army vehicles will aid you on your missions. For example: Crossbow, Beretta, Uzi, MP5, AK-74, RPK, M60, Dragunov, RPG-7, Sa-7. During missions you will need to pilot your own helicopters and command your own air strikes. Check out these screens.

New Screens: R63 Raven Shield
We have these new screenshots from Rainbow Six: Raven Shield, the latest in squad-based tactical shooter series. The game will utilize graphics technology provided by the next-generation Unreal engine to power 15 new single-player missions that include the discovery of a cache of biological weapons and stopping an armed gang from terrorizing a London bank. Rainbow Six 3: Raven Shield is scheduled for release February 2003 and the multiplayer demo will be released this month.

Military News Laser Weapon Shoots Down Artillery Projectile
In a world's first, a high-energy laser, developed by TRW for the U.S. Army and the Israel Ministry of Defense, has intercepted an artillery projectile and caused it to explode harmlessly in the air. Click here for live action video footage of the historic shoot-down by the Mobile Tactical High Energy Laser (MTHEL) test bed at the Army's White Sands Missile Range, New Mexico. All footage is being provided courtesy of TRW and the U.S. Army. 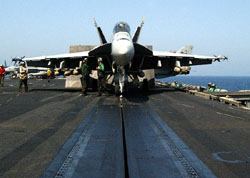 Coalition strikes in the no-fly zones are executed as a self-defense measure in response to Iraqi hostile threats and acts against coalition forces and their aircraft. Todays strike came after Iraqi forces fired anti-aircraft artillery at coalition aircraft in the southern no-fly zone and moved the SAM systems into the no-fly zone in violation of U.N. resolutions.

The last coalition strikes in the southern no-fly zone were Oct. 22 against a command and control communications facility near Al Jarrah, and an air defense operations center near Tallil.

Coalition aircraft never target civilian populations or infrastructure, and go to painstaking lengths to avoid injury to civilians and damage to civilian facilities.

General Dynamics Selected for UK Defense Digitization Program
General Dynamics United Kingdom Ltd. has been selected as the preferred supplier by the UK Ministry of Defence (MoD) to demonstrate, supply and support a digital battle management system for deployment throughout the UK's ground-based defense forces.

Through this program, called the Digitization Battlespace Land-ComBAT, Infrastructure and Platform battlefield information systems application (DBL-CIP), General Dynamics will integrate hardware and software into a common digital communications and situational-awareness system for deployment with all UK ground forces, from individual combat vehicles up to the division level. The system will give fighting forces constant access to command and control information, even while they are on the move. The first fighting unit will be converted to the new system by mid-2003.

Initial fielding of the BOWMAN-CIP integrated ground communications and information infrastructure to a full brigade will be in 2005, and full operational capability will be reached in 2007.

General Dynamics UK was awarded a $2.4 billion (£ 1.7 billion) contract for the BOWMAN secure, digital voice and data communications system in September 2001. BOWMAN will include a situational awareness system, and will provide the infrastructure to support a range of digitization applications, such as DBL-CIP, over the next 30 years. Approximately, 20,000 UK army vehicles will be equipped and 70,000 Service personnel trained on BOWMAN by October 2007. BOWMAN replaces a system that is more than 25 years old; it will be the largest defense communications program in the UK in over 50 years.