Strategy gamers and war buffs are going to love this game, says Steve Milburn, Director of Marketing for Strategy First. Hearts of Iron really brings a new perspective to the war game market.

Many PC games have brought different facets of World War II to the small screen, but Hearts of Iron is unique for many reasons. It covers the entire period of the War from 1936 to 1948, rather than fragmented periods, and offers a historically accurate rendering of that monumental decade. Players can bring the battle to any front they choose and must use a combination of diplomacy, strategy and combat to overcome their enemies and lead their country to victory. On top of all this, there are hundreds of hours of gameplay to be found and players can optimize their fun with multiplayer support over LAN or Internet.

New Screens: Lock On
We have new screens from Ubi Soft's, Lock On: Modern Air Combat.

Also, there has been several changes on the official Lock On: Modern Air Combat site, including release dates, aircraft and other features the FAQ has now been updated.

The Raptor Avionics Integration Laboratory, or RAIL, will take F/A-22 hardware, surround it with sophisticated test-monitoring equipment, integrate it with the latest avionics software and then test it under simulated operational conditions. The laboratory was established to incorporate lessons learned from the program's ongoing developmental flight-test program at Edwards Air Force Base, Calif., during which the team determined that more on- ground, laboratory-based integrated avionics testing is needed to ensure adequate avionics stability. The laboratory is located in an already existing building within the Marietta facility. 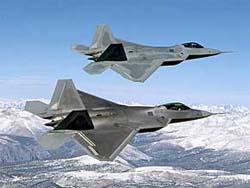 "The RAIL is key to ensuring avionics stability, which is necessary for the timely start and successful completion of the program's Dedicated Initial Operational Test & Evaluation (DIOT&E) phase," said Bob Rearden, F/A-22 program general manager. "The RAIL will enable the program to complete all outstanding avionics integration activities as we progress toward high-rate production."

The Raptor will replace the aging F-15 Eagle as America's premier front- line fighter jet starting in 2005. The Raptor's balanced design of stealth, supercruise speed and extreme agility, along with its advanced integrated avionics and overall user-friendliness, makes the aircraft truly transformational and will allow the F/A-22 to help the Pentagon shorten future wars and save American and allied lives.

The F100-PW-229 engine is in the 29,000-pound thrust class and provides approximately 20 percent more thrust than the original F100-PW-220 engine in these aircraft. 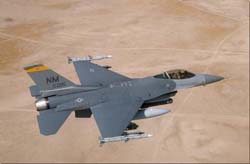 "With the bigger engines, we can fly higher and faster, turn/climb/accelerate faster, take off in shorter distances with heavy payloads, and, with less use of afterburner, have more time on station," said Lt. Col. Steven R. Kopp, commander of the 125th Fighter Squadron, Oklahoma ANG, based at Tulsa. "These performance improvements are very important to our pilots flying peacekeeping missions over Iraq. Another benefit of the -229 over the -220 is its enhanced reliability."

Four-man maintenance teams are able to modify the aircraft, swap out engines and do the necessary systems checks in a four-day, single-shift operation.

"This is the first time that inventory F-16s have been re-engined with a higher-thrust engine," said William J. Lake, director of U.S. Air Force and European Participating Air Forces F-16 Programs at Lockheed Martin Aeronautics. "This further demonstrates the versatility and growth potential of the F-16."

The ANG wanted to have enough aircraft modified to support an upcoming "rainbow" deployment to the Middle East. This is part of the scheduled 90-day Aerospace Expeditionary Force rotation commitment for the three ANG units operating the Block 42 version.

Three ANG squadrons operate approximately 50 Block 42 F-16s. There are no current plans to re-engine the active USAF's Block 42s, which are used in a training role at Luke Air Force Base, Ariz.

The F-16 is playing a major role as the durable and versatile "workhorse" in allied peacekeeping operations in the Balkans and Iraq. The F-16 is a key player in Operation Noble Eagle, homeland air defense of the United States, and is frequently participating in Operation Enduring Freedom in the war on terrorism in Afghanistan.