Bid to Cripple Internet Fails
SAN FRANCISCO (Reuters) - The core servers that direct e-mail and Web surfers to their desired destinations around the world were attacked on Monday in an apparently coordinated attempt to cripple the Internet, experts said on Tuesday. [More...]

Military News International Success Continues For SPIKE
The SPIKE system - a key contender in the Australian Defence Force's (ADFs) Land 40 Phase 1 guided weapons programme - has recently been selected by the Polish Government to bring its armed forces up to NATO standards.

The Polish decision, in July 2002, will result in a programme that could be worth around US$250 million over the next 10 years. Poland joins Finland, The Netherlands and Singapore, who have already selected SPIKE as their choice of direct fire anti-armour weapon, over other options. 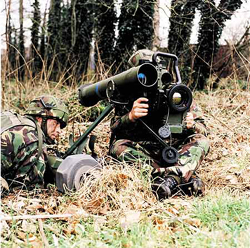 "SPIKE not only operates as a 'fire and forget' system, but also as a 'fire, observe and update' system. This means that while the missile is in flight, the user can steer the missile to an optimised aim-point, and also divert the missile away should the need arise - thus minimising collateral damage and reducing the risk of fratricide. This capability is unique to SPIKE and is key to its international success."

"In addition, SPIKE's thermal imager, which works at a wavelength well suited to Australian conditions, and its high magnification daylight optics, permit the system to be used for battlefield intelligence gathering. SPIKE also has a tripod, which supports the weapon both during firing and, most importantly, during long duration observation missions", he said.

Lockheed Martin Delivers LOSAT to U.S. Army
Lockheed Martin delivered its first Line-of-Sight Antitank (LOSAT) Weapon System Fire Unit, a lightweight system for transformation forces, to the U.S. Army in a ceremony today at the Association of the United States Army (AUSA) Annual Meeting in Washington, D.C. This was the first of 12 LOSAT Fire Units that will be delivered to the Army as part of the Engineering & Manufacturing Development (EMD) program.

LOSAT provides a high volume of extremely lethal and accurate missile fire that is effective against heavy armor systems at ranges exceeding tanks' main gun ranges. LOSAT consists of kinetic energy missiles (KEM) and a second-generation FLIR/video acquisition sensor mounted on an air-mobile, heavy HMMWV chassis. The LOSAT weapon system will help remedy the forced-entry/early-entry force lethality shortfall against heavy armor because it can deploy with both forces. 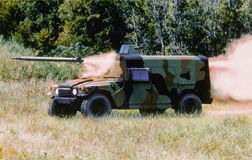 The key advantages of the LOSAT are the tremendous overmatch lethality of the KEM, which defeats all predicted future armored combat vehicles, and its deployability. The LOSAT weapon system also provides increased survivability for the operator and countermeasure effectiveness. It operates to the maximum range of direct-fire combat engagements and provides dramatically increased rates of fire and enhanced performance under day and night, adverse weather and obscured battlefield conditions.

The LOSAT-equipped Expanded Capacity HMMWV has a combat weight of 11,634 lbs. The system has a range of several miles and is "near fire and forget." With a missile speed of 5,000 feet per second, it reaches maximum range in less than five seconds. The LOSAT missile is a hit-to-kill missile with no explosive warhead. It carries a long rod penetrator and destroys the target through the application of brute force. Each HMMWV chassis mounts four missile launch pods.

The system can be reloaded in less than 10 minutes using on board materiel handling equipment. The kinetic energy missile weighs 174 pounds, is 113 inches long and 6.4 inches in diameter. The current system provides for a three-man crew, but a crew of two can conduct engagements. The system uses a state of the art second-generation Forward Looking Infrared sight for target detection and recognition. The system will be fully integrated into the digitized battlefield for improved situational awareness. Provisions are also being made for the development of a LOSAT system enhancement program with a design goal of maintaining the current missile's range and lethality while significantly reducing the size. 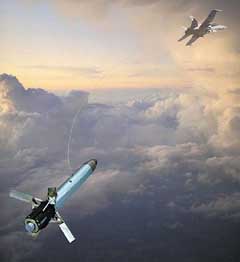 The Lot 6 award calls for 985 towed decoys for U.S. Air Force and Navy aircraft. Equipment acquired by the Lot 6 award will be delivered through September 2004. The award also includes an option to exercise the Lot 7 production contract by March 2003. Completion of the Lot 6 program will bring the total number of decoys produced by Raytheon to 16,725.

Towed decoy systems provide significantly enhanced aircraft survivability by acting as a preferential target for many types of missile threats. Raytheon's ALE-50 system has played a key role in aircraft self-protection for several military conflicts. Work on the towed decoy system is being done in Goleta, Calif. by the company's Electronic Warfare Systems organization.