PC News IGI 2: Covert Strike Slips
COMBATSIM.COM has learned that the release date for IGI 2: Covert Strike has been pushed back from November this year to February 2003. The news was broken to fans in Codemaster's, IGI 2, forum, where the team leader of the QA department working on the game explained that although the game could have been released in November, doing so would have meant leaving out certain parts of the game and almost certainly releasing the game with bugs. 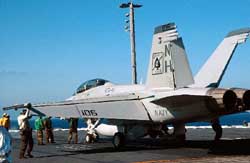 The U.S. Coast Guard has launched a search and rescue operation for the four aviators.

The aircraft were operating with six other aircraft from the same squadron and were conducting routine training. They did not have any weapons on board.

The cause of the accident is under investigation.

VFA-41 was formerly an F-14 Tomcat squadron, having made the transition to the F/A-18F Super Hornet this summer. The F model is the two-seat variant of the Navys newest strike fighter. This is the first crash of a Super Hornet.

Boeing Unveils Bird of Prey
Boeing today unveiled the "Bird of Prey," a technology demonstrator that pioneered breakthrough low-observable technologies and revolutionized aircraft design, development and production. The once highly classified project ran from 1992 through 1999, and was revealed because the technologies and capabilities developed have become industry standards, and it is no longer necessary to conceal the aircraft's existence.

In addition to proving many new stealth concepts, the Bird of Prey program demonstrated innovative rapid prototyping techniques. Developed by the Boeing Phantom Works advanced research-and-development organization, the Bird of Prey was among the first to initiate the use of large, single-piece composite structures; low-cost, disposable tooling; and 3-D virtual reality design and assembly processes to ensure the aircraft was affordable to build as well as high-performing. 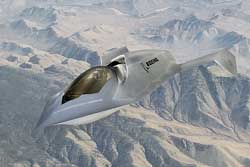 Fully funded by Boeing, the Bird of Prey project costs $67 million. A subsonic, single-seat technology demonstrator, the aircraft completed 38 test flights as part of its flight-demonstration program. Its first flight took place in fall 1996. Bird of Prey has a wingspan of approximately 23 feet and a length of 47 feet, and weighs nearly 7,400 pounds. Powered by a Pratt & Whitney JT15D-5C turbofan engine, the Bird of Prey has an operational speed of 260 knots and a maximum operating altitude of 20,000 feet.

"Early investments in technology demonstration projects such as Bird of Prey have positioned Boeing to help shape our industry's transformation," said Jim Albaugh, president and CEO of Boeing Integrated Defense Systems. "With this aircraft, we changed the rules on how to design and build an aircraft, and what we've learned is enabling us to provide our customers with affordable, high-performing products.

Projects such as Bird of Prey have provided the catalyst for integrating speed, agility and reduced cost into the processes we employ to introduce new commercial and military systems to market."

Boeing's current development of the X-45A Unmanned Combat Air Vehicle, or UCAV, technology demonstrator draws directly on its Bird of Prey experience. Some aspects of the UCAV's innovative radar-evading design, such as its shape and inlet, were developed from this project. Together, Boeing Phantom Works and Boeing Integrated Defense Systems are developing UCAV for the Defense Advanced Research Projects Agency, or DARPA, and the U.S. Air Force.

"The success of the Bird of Prey is a testament to the shared commitment of Boeing and the Air Force to pioneering innovative methods to drive down costs and improve performance," said George Muellner, senior vice president of Air Force Systems for Boeing Integrated Defense Systems. "This project stressed affordability as much as performance and quality, and is one of many that we are using to define the future of aerospace."