The upgrade (taking the game to v1.85) contains over 60 new features and codes. New weapons include the powerful civilian hunting rifle with optics, a revolver and M-10 sub machine gun. Additional troops include a masked Resistance soldier, a standard pilot with revolver and a BlackOp complete with hand gun silencer. The added civilian vehicles are a bicycle and a car. The upgrade also features two new official multiplayer missions: Sector Control and Flag Fight Hand Guns.

Click here full details are available from the Operation Flashpoint: Resistance web site, along with the downloadable file.

Teut Weidemann, Head of Development at Wings Simulations commented: "Söldner - Secret Wars will be a unique online game and is set to offer gamers a completely new experience in the tactical shooter genre. Without doubt, this is one of the most ambitious games being created here and is set to usher in a new level and scale for gaming development."

Tactical Ops: Assault On Terror Upgrade v.3.3.2
Infogrames today announced it has launched an all-new upgrade for its Tactical Ops: Assault on Terror PC game. Dubbed "Tac Ops v.3.3.2," the upgrade or patch offers new gameplay enhancements and now allows worldwide compatibility between the US and European retail versions. The file can be found online here.

Military News Missile Intercept Test Successful
The Missile Defense Agency (MDA) announced today it has successfully completed a flight test of the ground-based midcourse defense (GMD) development program, intercepting an intercontinental ballistic missile target. The test took place over the central Pacific Ocean in the Western Test Range. A modified Minuteman intercontinental ballistic missile target vehicle was launched from Vandenberg Air Force Base, Calif., at 10 p.m. EDT, and a prototype interceptor was launched 22 minutes later and 4,800 miles away from the Ronald Reagan Missile Site Kwajalein Atoll in the Republic of the Marshall Islands. The intercept took place approximately six minutes after the interceptor was launched, at an altitude in excess of 140 miles above the earth, and during the midcourse phase of the target warhead's flight. This was the fifth successful intercept--and the fourth consecutive--in seven flight tests since October 1999 for the GMD program. 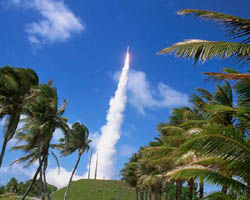 This test involved for the first time the participation of a U.S. Navy Aegis destroyer, the USS John Paul Jones, using its SPY-1 radar system. Although the radar was not integrated into the battle management system for the intercept, it did gather important data on the capabilities of the radar against a long-range ballistic missile. Future tests will include direct participation of the radar in order to determine its potential capability against long-range missiles.

This system-level test successfully demonstrated "hit to kill" technology to intercept and destroy a long-range ballistic missile target. In addition to the exoatmospheric kill vehicle (EKV) locating, tracking, and intercepting the target resulting in its destruction using only body-to-body impact, this test also demonstrated the successful integrated operation of space and ground-based sensors and radars, as well as the Battle Management, Command, Control and Communications System (BMC3) function to detect the launch of the target missile, cue an early warning radar to provide more detailed target location data; and integration of a prototype X-Band radar (based at Kwajalein) to provide precise target data to the EKV, which received the target updates from the In-Flight Interceptor Communications Systems (IFICS) at Kwajalein.

The EKV separated from its rocket booster more than 1,400 miles from the target warhead. After separation, it used its on-board infrared and visual sensors, augmented with the X-Band radar data provided by BMC3 via the In-flight Interceptor Communications System, to locate and track the target. Sensors aboard the EKV also successfully selected the mock warhead from among the five objects in the target array, including three decoys. Only system-generated data was used for the intercept after the EKV separated from its booster rocket.

This test is a major step in an aggressive developmental test program, and we will continue to pursue this testing regime to achieve a layered approach to missile defense, using different architectures to deter the growing threat of ballistic missiles carrying weapons of mass destruction.

Three Nations Select Raytheon to Deliver Dogfight Air Superiority
The Royal Air Force of Oman, the United Arab Emirates Air Force and the Czech Republic Air Force all signed individual U.S. Government Letters of Offer and Acceptance authorizing procurement of Raytheon Company's AIM-9M Sidewinder missiles. These missiles will equip the Oman and UAE F-16s and the Czech Republic L-159 aircraft. The total value of these orders is in excess of $35 million. 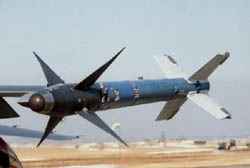 Raytheon has produced more than 45,000 guidance control sections and 75,000 active optical target detectors throughout the evolution of the AIM-9 Sidewinder missile. Raytheon is also the prime contractor for the AIM-9X next generation Sidewinder missile, which is in production today.

The AIM-9M is a U.S. Navy program that has been in production for 15 years. The AIM-9 Sidewinder missile is combat proven and is the short-range standard for U.S. Forces and many of their allies. The Sidewinder missile family is currently in use by more than 40 nations worldwide.

The testing was a great success, said Maj. Greg Weber, the CV-22 government flight-test director here. "This last round of tests has basically verified that a lot of our design changes are giving us the type of performance that we're looking for," he said. Throughout testing in the BAF, a building-block approach was used to learn from past testing and implement necessary changes for future tests. The team started testing inside the BAF with antenna-pattern measurements. 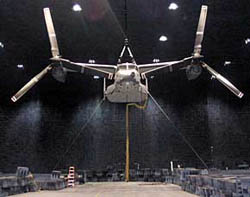 "As is always the case, whenever you install antennas on the airplane and begin testing them, there are things that don't exactly work the way some models say they would," said Weber.

After adjustments to the antennas were made, the test team moved on to more than eight weeks of electronic warfare testing, where they examined SIRFC's response to threat systems.

"In electronic warfare testing you get into some of the other performance-related items such as the angle of arrival, the accuracy of the threat information and threat-response time," said Weber.

Some factors cannot be effectively tested in the air, such as the interaction between the SIFRC system and the multimode radar system, according to Rex Wade, Bell-Boeing's electronic warfare lead test engineer.

This type of testing is known as interoperability testing.

"Part of our testing is designed to find not only how well the SIRFC system works, but also seeing how well it works in conjunction with other aircraft systems," said Wade. "So we had to make sure the multimode radar system and SIRFC system didn't hinder each other in performance."

The next step will be for Bell-Boeing to analyze the data from the BAF testing and make recommendations to the CV-22 program office. Once analysis is complete, the test team will take the airplane and fly it on the open-air ranges for testing.

"Overall, the testing went exceptionally well," said Wade. "Everyone on the team put in a lot of hours and worked extremely hard, and we were able to gather a lot more data than we originally expected."

And because of the success of the BAF testing, this could be the last time the CV-22 ever needs to be tested in the BAF, said Weber.

"Over the next year they may decide to tweak an antenna location or see if there's an effect that some of the new hardware will have, so there will always be an opportunity to go back to the BAF," said Weber. "But as of right now, we don't anticipate a need to go back, and we're planning to move on to open-air testing."