"The STRIKER 40 will be the first integrated air burst-capable crew-served weapon system fielded in the world," said Colonel Tom Spellissy, Program Executive Officer for Special Programs, USSOCOM. "It is a very effective system with first-round hit capability, it is highly reliable and it is easy for soldiers to use." 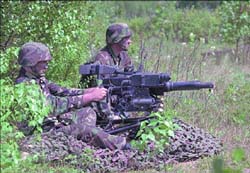 The STRIKER 40's integrated gun, sight and fire control system is significantly more accurate than any previously fielded grenade launcher. The system incorporates the latest targeting and sensing technology with a computerized fire control for operation under all weather conditions, day or night.

The STRIKER 40 is capable of firing programmable air burst ammunition made by NAMMO of Norway as well as all conventional high velocity 40mm ammunition in the U.S. inventory. General Dynamics is partnered with Raytheon in Forest, Mississippi to build the Lightweight Video System (LVS) fire control designed by General Dynamics Canada. Work will be performed at sites in Saco, Maine and Burlington, Vermont.

"This award is the direct result of the outstanding success of the first flight demonstration on Aug. 23," said Louise Francesconi, president, Raytheon Missile Systems, Tucson, Ariz. "I am proud of the progress that the joint Raytheon-U.S. Navy team has made in taking us one step closer to Fleet introduction." 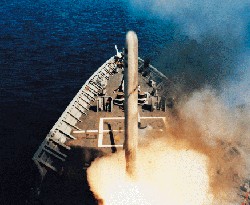 World War II Ace Foss Hospitalized
Retired U.S. Marine Maj. Joseph J. Foss, a top World War II flying ace who served as governor of South Dakota and the first commissioner of the American Football League, was in critical condition Wednesday after suffering an apparent aneurysm. Foss, a fighter pilot in the South Pacific, was believed to be the first to break the 1918 aerial record of Eddie Rickenbacker, who shot down 25 German planes during World War I. [More...]

USAF Acknowledges Beam Weapon Readiness
Directed-energy technology is ready to be used as weaponry and, in a mature state, one device carried by an unmanned aircraft could attack each of 100 targets with 1,000 pulses of energy in a single sortie, says a former director of the U.S. Air Force's high-power microwave program. [More...]