PC News Enigma: Rising Tide Offline Version Has Gone Gold
Tesseraction Games, Inc., a group of Ex-Dynamix employees, announced today it has gone gold with the limited edition offline version of ENIGMA: RISING TIDE, its upcoming massively-multiplayer cinematic naval combat game. A demo of the single-player game was released earlier this month. The game's release is scheduled for September 27. ENIGMA: RISING TIDE will be available for purchase over the Internet from Gigex (gigex.com) and other online sites for a price of $20, which will include, upon registration, a free 30-day subscription to the multiplayer game.

ENIGMA: RISING TIDE is a massively-multiplayer game featuring ship-to-ship battles with high player densities. The multiplayer game software will be available free-of-charge, and following an initial free trial period, players will register and pay a monthly subscription fee. In addition to tracking its persistent storyline, Tesseraction Games plans to release upgrades and expansions every three months for the life of the game, also at no charge to subscribers. Check out these screens

Creative Announces Audigy 2
Creative Technology has announced the Sound Blaster Audigy 2, the latest in its long-running line of PC sound cards. The Audigy 2 has the same claim to high-quality 24-bit/96kHz sound as the Audigy, but adds support for 6.1 Dolby Digital EX, which adds an extra rear channel speaker. The 6.1 output will work with DirectSound3D games and with DVDs encoded with Dolby Digital EX support, and the card can also up-mix stereo sources to output to 6.1 speakers. The Audigy 2 seems intended for PC users with a taste for high-end audio electronics. Creative points out that users can take advantage of a PC's DVD-ROM drive and the Audigy 2 to play DVD-Audio discs for full 24-bit sound. The Audigy 2 is also capable of 24-bit audio recording, a feature that has previously been limited to high-end professional sound cards. Both versions will ship worldwide in October.

The design, or "preferred system concept," which includes variants for a long-range military strike aircraft and a civil business jet, is part of Northrop Grumman's work under the Defense Advanced Research Projects Agency's (DARPA) Quiet Supersonic Platform (QSP) program. QSP is focused on the validation of multiple breakthrough technologies to enable such aircraft. 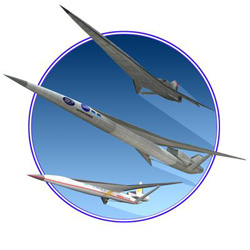 In addition, under a shaped sonic boom demonstration project of the QSP program, Northrop Grumman Integrated Systems has successfully completed a critical design review with DARPA, an important milestone in preparation for the first-ever flight demonstration of a sonic boom mitigated by airframe shaping.

Northrop Grumman's QSP preferred concept, which culminated the company's work in Phase I of the QSP program earlier this year, incorporates dual-use technologies in a design relevant to the military strike and business jet applications. In Phase II, Northrop Grumman is focused on maturing the military design and validating the key integration technologies.

The design calls for a joined-wing aircraft that is 156 feet long with a wingspan of 58 feet. It features a top-mounted, active isentropic air inlet, extensive laminar aerodynamics and wings with an adaptive leading edge. The preferred concept meets DARPA's QSP goals of 0.3-psf initial boom overpressure (approximately seven times lower than that of current commercial supersonic jets), a speed greater than Mach 2 (twice the speed of sound) and a range of 6,000 nautical miles.

The sonic boom flight demonstration, which will occur at the NASA Dryden Flight Research Center at Edwards Air Force Base, Calif., will use a Northrop Grumman F-5E aircraft with a modified fuselage. The modified aircraft is expected to produce a specially "shaped" sonic boom with significantly less intensity than the conventional sonic boom produced minutes earlier by an unmodified F-5E.