PC News Join Warbirds Korea Development Corps
iEN, creators of Warbirds III, is gearing up for the development of Warbirds Korea. While producing Warbirds III they have added "player developers" to their "team" and have had a great response from the community. Once again, iEN is actively looking to recruit new players to their Warbirds Korea Player Development Corps. They need people with a firm grasp of the history of the Korean conflict both in general terms of the air war specifically. They could also use a few good artists (skinners) and 3-d designers to "flesh out" the plane set and help with ground objects and effects.

Applicants must be ready and willing to sign an non-disclosure agreemant and able to do a certain amount of "self-starting". We'll provide the tools, you provide the content. If your interested in helping contact: Matt "Target" Davis

New Screens: DF:Black Hawk Down
We have new screens from the latest Delta Force incarnation, Black Hawk Down. Set in Somalia in 1993, Delta Force - Black Hawk Down is based upon and around the Operation Restore Hope and Task Force Ranger campaigns and follows members of the elite Delta Force and US Army Rangers as they participate in a number of daring raids against the oppressive Somali warlords in and around Mogadishu.

AMD Delivers Hammer Technology Resources
At the AMD Developer Symposium, AMD today joined with Linux partners to help further the development of their 64-bit computing platforms. The symposium, which focuses on the Linux and open source software and hardware development communities, is taking place today and tomorrow at AMD's world headquarters in Sunnyvale. Developers are participating in a range of technical presentations on the upcoming AMD processors based on Hammer technology.

In addition to AMD, IBM, MigraTEC, Numerical Algorithms Group (NAG), The SCO Group, STMicroelectronics, and UnitedLinux are presenting on a range of topics relating to Linux on the x86-64 technology-based platform.

AMD's upcoming 64-bit processors based on Hammer technology will extend AMD's history of semiconductor solutions based on customer-centric innovations. They are designed to provide a smooth migration path from 32- to 64-bit technology, 32-bit backwards compatibility, investment protection, and a lower cost of ownership. AMD processors based on Hammer technology also will provide beneficial technology to the enterprise by innovating with open standards, compatibility, and businesses' best interests in mind.

Matrox Apptimizer
Matrox has developed a new utility called the "Apptimizer", designed for Parhelia, which automatically configures Surround Gaming games for you with the recommended settings provided from off the Surround Gaming page on the Matrox website. It also configures some games to ensure that the correct OpenGL extensions are being used, even in single head gaming mode. This utility makes taking advantage of Surround Gaming quicker and easier and can be downloaded today off the Matrox website in the utilities section here. -- For more information you can check out the read me included here.

Military News B-1B Crash Cause Remains Unknown
Air Force investigators have determined the cause of the Dec.12, 2001, crash of a B-1B bomber into the Indian Ocean remains unknown.

An Air Combat Command Accident Investigation Board report stated that aircraft malfunctions affecting the reliability of the pilots' attitude information might have made it difficult for the pilots to maintain control of the aircraft. 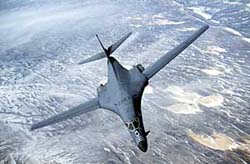 The four-member crew ejected and sustained minor injuries. A Navy rescue team found them. The aircraft, which was destroyed on impact with the ocean and sank, was not found.

The B-1B was assigned to the 28th Bomb Wing at Ellsworth AFB, S.D. At the time of the crash, the aircraft was temporarily assigned to the 34th Expeditionary Bomb Squadron to fly combat missions in support of Operation Enduring Freedom.