U.S. Special Forces: Team Factor has a three-team scenario, with each team competing against the other two, all with overlapping objectives. Become a member of an elite fighting force as a soldier, scout, sniper or specialist. Players must move swift, silent and deadly in many drop zones such as a Siberian airfield, a Turkish bath, the Mekong Delta, a Middle Eastern port and locations in the U.S. The 3-D LightForce engine designed specifically for USSF brings the drop zones to life with superior graphics, texture mapping and smooth animations. USSF's robust multi-player function allows for up to 30 players over LAN or Internet.

Front Line Attack: War Over Europe depicts the struggles of war torn Europe between 1941 and 1944. Set in a real time World War II scenario the player takes control of a variety of armored and mechanical units, ground troops and air support units in epic battles of skill and nerve.

The game spans the German attack on the Soviet Union through to other important battles on the Eastern Front, operations in France and Italy to the German offensive in the Ardennes. Players can play as German, Soviet or Allied units each with access to their own vehicles and weapons. Reality Pump's newly developed Earth-3 engine allows a spectacular level of detail and unbelievable Graphics.

The game features both single and multiplayer modes. Single player campaigns offer advanced tactical operations with soldiers, armored vehicles and long-range weapon support whereas Multiplayer and Skirmish modes play like a classic RTS game with resources and base building.

During the same time, an AIM-120B was also launched as part of the final validation for another AMRAAM software suite. All three test firings occurred on the RFN Missile Test Range in Vidsel, Sweden, using missiles with telemetry and without warheads. 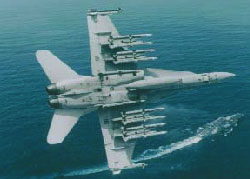 The AIM-120C-5 AMRAAM production missile was first offered to international customers in May 2000. The AIM-120C-5 missile is the latest version of AMRAAM available for international air forces. In addition to the clipped wings and fins for internal carriage in aircraft such as the Joint Strike Fighter, the AIM-120C-5 includes a larger rocket motor, improved warhead and new software not available with earlier models. The larger rocket motor provides improved pilot survivability, while the new warhead increases lethality.

AMRAAM is a software-driven, radar-guided missile that gives pilots the ability to "launch and leave" and to engage multiple targets during a single engagement. More than 12,000 missiles have been produced for U.S. and international customers.

AMRAAM is fully operational on the F-15, F-16, F/A-18, the German F4F, the United Kingdom Sea Harrier, Swedish JA-37 Viggen and the JAS-39 Gripen. It is currently being integrated on the F-22, Eurofighter, Harrier II Plus, Tornado and the Joint Strike Fighter. AMRAAM has also been adapted to a surface-to-air role for air defense and is operational in Norway as the Norwegian Advanced Surface-to-Air Missile System (NASAMS) and has been demonstrated in a HAWK-AMRAAM system and on a High Mobility Multipurpose Wheeled Vehicle (HMMWV)-based system called HUMRAAM. The United States Marine Corps awarded a contract last year to Raytheon for their version of HUMRAAM, called Complementary Low Altitude Weapons System (CLAWS), which will be introduced into operational service by 2005. The U.S. Army is also generating a requirement for a HUMRAAM system, called Surface Launch AMRAAM (SLAMRAAM).

U.S. Army Transformation Plan Going Full Force
With lessons learned from the Gulf War and Somalia, the United States Army is challenging soldiers to excel as part of a faster, more effective fighting force built on the strengths of superior training, technology and information networks.

This evolution is a keystone of the Army's Transformation plan, an Army- wide vision of how it responds to any threat, anywhere in the world, with speed and stealth. A critical capability of Transformation will be the ability to deploy a combat brigade in 96 hours, a combat division within 120 hours and five divisions within 30 days. This quick response time will allow the Army to prevent the escalation of regional skirmishes into full-scale wars.

Transformation focuses on preparing the Army to challenge and defeat the new face of warfare, which is increasingly found in small regional conflicts instead of the traditional Cold-War style battlefields. Developing new kinds of soldier skills is the key element to the success of this plan.

The central focus of Transformation is the training and preparation of the Army's soldiers to be the best-equipped and trained Army in the world -- bar none. The Army's Transformation strengthens this focus on soldiers by continually investing in new technologies, strategies and training.

The primary physical aspect of Transformation is the introduction of advanced equipment designed primarily for this new style of warfare. Phase one includes the introduction of the Stryker, a light armored vehicle that relies upon eight technologically advanced wheels. With 10 different types of Strykers designed for various missions, Strykers possess ultramodern technology with lighter armor, advanced thermal tracking and protection against unconventional warfare.

"The Stryker is the new vehicle that we're fielding," said Spc. Michael Minutaglio, vehicle commander based at Fort Lewis, Wash. "Their mobility and technology really helps us get the infantry into the hot spots quickly and safely. It will be a tremendous asset to have in battle."

A secondary feature of Transformation is enhanced tactical integration among Army units, both on the ground and in the air. Battle-proven helicopters such as Apaches, Black Hawks and Chinooks provide vital support to troops, vehicles and long-range missile systems. As Transformation unfolds, soldiers will increasingly utilize satellite intelligence, robotic weapons, and aerial drones.

"Aviation's main role is infantry support, providing air and fire support for their ground operations," said Chief Warrant Officer Lisa Jewett, an Apache co-pilot based at Fort Hood, Texas. "However, we understand that it's critical for us to work as one team to achieve the mission objective."

With these improvements in training and technology, the Army continues to establish itself as the preeminent military force in the world, able to combat enemies anywhere with measured success and resolve. This ability is built upon the strength of the soldiers within the units and the nation behind them.

"Given the world climate these days, I think that my pride for the Army and America has increased because I now know that I joined for a reason," Jewett said. "And if called upon, I will gladly do my job to protect America."