New Screen: Cossacks  Back to War
We have 6 new screens from CDV's lastest Cossacks add-on, Back to War. Back to War introduces a new VIZOR system, which allows players to watch multiplayer games in progress, picking up addition tips from real-life competitors. An Automated Championship System (ACS) promotes individual Cossacks tournaments as well as hosting a worldwide ranking system which will list the best players in the world. Cossacks - Back to War will work with the original Cossacks game or as a standalone title, meaning more players than ever before will be able to enjoy the brilliant Cossacks world.

Featuring over 100 new single player missions, Cossacks  Back to War, also introduces two new nations into the battle  Switzerland and Hungary, as well as, a bonus, Mod1, created by one of the games most ardent fans, is included, offering a further 30 playable maps, with a unique set of units.

ESSM is an international cooperative upgrade of the RIM-7 NATO SEASPARROW Missile. SEASPARROW is already the most widely deployed ship-defense missile system in the world. The new missile will provide the primary air defense for the capital ships of the 10 participating NATO navies. Discussions are under way to outfit the ships of at least six other navies as well. 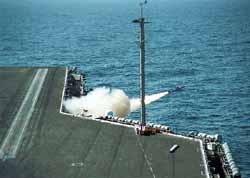 The program is managed by the NATO SEASPARROW Consortium, a 32-year-old organization described as "NATO's largest and most successful cooperative weapons project." Raytheon's Missile Systems business unit in Tucson, Ariz., is leading the team of 18 companies from 10 countries in developing and producing this next-generation SEASPARROW ship self-defense system. The other nations participating in ESSM's development include Australia, Canada, Denmark, Germany, Greece, the Netherlands, Norway, Spain and Turkey.

ESSM has the speed, agility and accuracy to engage threats to the launching vessel at maximum range and in the most challenging of conditions. The final phase of the missile's flight test program is scheduled for the early spring of 2003 when performance with the AEGIS Fire Control System of the U.S. Navy's Arleigh Burke class of guided missile destroyers will be verified.