Frontline Attack German Demo
There is a German playable demo for Frontline Attack: War over Europa, the 3D RTS by In Images that's also known as World War II: Panzer Claws in North America. The demo allows you to try out the tutorial and one mission playable as the Wehrmacht side, provided you can stomach the massive download size, and the demo is entirely in German so be prepared for some guesswork. download

VietCong Screens
We have more screens from Take 2 Interactive's Vietnam shooter, Vietcong. Acting as an elite soldier, players of Vietcong command the A-team, part of the U.S. Special Forces, in realistically represented Vietnamese environments. Players will lead as many as six expertly trained soldiers through 20 dramatic missions, and follow a storyline that captures the danger, fear and unpredictability of the war itself. The full-featured multiplayer mode also allows gamers to play as U.S. Special Forces or Vietcong soldiers and to battle over specially designed levels. Players choose from more than 25 weapons, including M16's, grenade launchers and sniper rifles. Players can order air strikes or ambush enemy patrols, but success ultimately depends on their ability to keep a level head in the thick of intense action. Screenshots

Military News Arm'ze Laser
With the airborne laser flight test program under way, members of the ABL Integrated Test Force here are putting the finishing touches on a new facility that will be key to upcoming ground tests.

The $18.5 million test support structure, known as the Ground Pressure Recovery Assembly, will allow the test team to operate the weapons-class chemical laser and conduct testing on the ground. 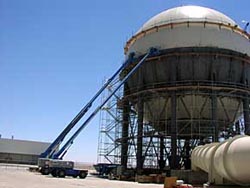 The laser, which sits aboard a modified 747-400 series freighter aircraft, is designed to shoot down ballistic missiles while they still are over an enemy's own territory.

The facility supports ground tests, which will take place inside the ABL Systems Integration Laboratory, known as the SIL. Ducting will connect the aircraft housed inside the SIL to the recovery assembly. Ducting can also be routed to additional hangars inside the ABL test complex to accommodate testing at other locations.

According to Kevin Montoya, ABL project manager here, the recovery assembly is part of the ABL program's risk-reduction plan. The industrial grade chemicals needed to produce the laser beam require detailed support and expertise from across the base, Montoya said. Therefore, safety continues to be paramount for the test team.

"We want to reduce our safety risks as we build up this weapon system," Montoya said. "This means learning about the operation of the laser inside the SIL and through ground testing. What we learn could reduce the overall flight test risk of the program."

The ABL program's ultimate goal is to shoot down a ballistic missile with a beam of ultra-powerful light by the end of 2004. The aircraft, tail No. 00-0001, which made its first flight July 18, is scheduled to arrive at Edwards later this year.

According to Montoya, it is possible that other Department of Defense agencies as well as private industry could use the recovery assembly for similar directed-energy tests in the future; however, currently the team is concentrating on preparing the aircraft for its major test against a ballistic missile. Besides testing on the ground, the test program includes laser firings against a number of objects in the air over White Sands Missile Range in New Mexico, such as balloon-dropped instrumented targets and short-range rockets.

"Our focus right now is to shoot down a missile in 2004," Montoya said. "We don't want to sideline that in any way, but if some synergy exists that can ultimately save the taxpayer money, then it's in our best interest to consider that down the road."