PC News Battlefield 1942 Goes Gold
Gone Gold is reporting the Battlefield 1942 has gone gold and is being readied for distribution next month. The multiplayer demo was released last Friday, and it's available for download.

Battlefield 1942 is a multiplayer-focused team-based shooter that takes place in World War II and will let players play as infantry soldiers who can jump into and pilot lots of different vehicles, including jeeps, tanks, fighter planes, and even battleships.

Uncommon Valor v1.30 Released
Matrix Games has announced that version 1.30 of Uncommon Valor: Campaign for the South Pacific is now available for download. Uncommon Valor was released on May 15th and is a completely new operational game covering the campaign in the area around Australia, New Guinea and Guadalcanal during World War II. The update adjusts play balance for certain situations, fixes several reported bugs and addresses unit data errors. Note that owners of Uncommon Valor will need to download and install the previous patches before updating to v1.30.

Aces of World War I Site Launches
Lemon Interactive has opened an English-language Web site for Aces of World War I. The site features details on the game's biplanes and triplanes, a trailer, screenshots, and information about the Polish developer, Tatanka. The flight combat game has six flyable planes and more than 40 missions that include ground, air, and sea targets. Aces of World War I is currently available in Poland and will soon be shipping in the US.

Teamed with Lockheed Martin and Pratt & Whitney to design and build the F-22 for the U.S. Air Force, Boeing has lead responsibility for the training system, as well as for manufacturing the Raptor's wings and aft fuselage and integrating and testing its advanced avionics. 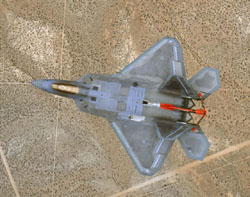 "Tyndall will be the first detachment set up for both pilot and maintenance training, " said Pamela Valdez, Boeing training system manager. "They'll be getting outstanding 21st century training facilities that will ensure both pilots and maintainers are well prepared when they receive F-22 aircraft at the base next year."

In the first stage, five fully automated electronic classrooms and two backshop labs for maintenance training will be installed. A full-size seat and canopy trainer and on-equipment structures trainer will follow. For pilot training, installation begins this October on a weapons and tactics trainer classroom. Two full mission trainers (FMTs), three instructional classrooms and 14 electronic workbook stations will also be housed in a 35,000 square foot facility. Boeing subcontractor L-3 Communications will install the weapons and tactics trainers and FMTs.

Similar facilities will be built at F-22 operational bases beginning in January 2004. 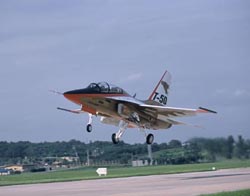 The T-50 advanced supersonic trainer will have the maneuverability, endurance and modern systems to prepare future pilots to fly current and next-generation fighters such as the F-16, F-15, F-22 and the F-35 Joint Strike Fighter. These same characteristics give it an excellent capability as a lead-in fighter trainer and potential light-combat aircraft derivative in many air forces.

GAO throws out General Dynamics' DD(X) protest
Raytheon Company will proceed with the DD(X) program following the announcement today by the Government Accounting Office (GAO) that it has upheld the Navy's contract award for DD(X) to a team led by Northrop Grumman Ship Systems. DD(X) is the U.S. Navy's next-generation surface combatant ship.

"We recognize the trust the U.S. Navy has placed in the Raytheon team to do the job," said Dan Burnham, chairman and chief executive officer of Raytheon Company. "The Navy's selection process was extensive, fair, and professionally managed," Burnham said, "we stand firmly behind our Navy customer, and, along with our industry partners, we are dedicated to providing the full capabilities and strengths of the Raytheon 'one company' team to DD(X)."

Raytheon is a partner with Northrop Grumman on the industry team that was selected by the Navy on April 29 for the three-year contract to design, develop, build and conduct at-sea tests of Engineering Development Models (EDMs) and then apply the results of the testing to a comprehensive DD(X) ship system design. The contract is expected to total $1.36 billion over the next three years.

"DD(X) represents the next-generation of technology for the U.S. Navy," said Bill Swanson, president of Raytheon Company. "The Raytheon team -- in partnership with Northrop Grumman and the Navy -- is completely focused on the program and is ready to execute the technical development required to deliver a revolutionary war fighting capability to the Navy."

The U.S. Air Force refurbished and delivered the aircraft. Lockheed Martin provided the upgrade kits for refurbishment and will provide logistics support and maintenance training. Plans call for five more F-16s to be delivered in October and the remaining six early next year. 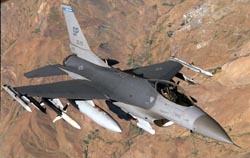 Air Chief Marshal Thares Punsri, chief of the Air Staff for the RTAF, accepted the aircraft and expressed his appreciation to the U.S. Air Force and F-16 industrial team, led by Lockheed Martin, for the professional execution of the Peace Naresuan IV program. "This is another significant step in the modernization of our air force with the Fighting Falcons," Thares said.

Thailand has received 36 new F-16A/Bs in three previous buys delivered between 1988 and 1996. Thailand, which has been operating the aircraft for 14 years, recently surpassed 55,000 flight hours with an excellent safety record.

This group of aircraft consists of 15 F-16A single-seat models and one F-16B two-seat model. The last six aircraft will support training in the United States until their delivery next year.

Thailand is one of six countries that have acquired more than 150 F-16A/Bs from USAF storage. In 2003, the Italian Air Force will begin receiving the same version selected by Thailand.