The gameplay in Iron Storm combines shoot em-up, action and reflection. The player undertakes an infiltration mission and must possess combat skills as well as stealth if he is to survive as he penetrates behind enemy lines. Depending on the circumstances, the player can choose between first and third person views.

The player must pass through 6 worlds in a Germany ripped apart by the front line: the Friedrich line (the Western front), the Anton Denikin line (the Russo-Mongol front), Wolfenburg (an enemy-occupied town), the Mad Barons heavy water factory, the 'Tzar Ivan' armoured train and the Reichstag in Berlin. The player must face different types of enemy, all of whom have different fighting styles and AI: Kazakh troops, Sturmpionners (soldiers of the 'Deutsche Reichskorps', Russo-Mongol allies), Siberians, Cadets from Baron Ungerns bodyguard and, especially, Consortium agents.

ATI Announces Radeon 9700 Pro
ATI has announced the official product name and specs for its next high-end graphics card, the Radeon 9700 Pro. The Radeon 9700 was revealed a few weeks ago, and it has been trumpeted as the first ATI product to promise significantly better performance than archrival Nvidia's lineup can deliver.

ATI has finalized a few details of the card's specs since last month's preview launch. Most notably, the chip in the Radeon 9700 Pro will run at 325MHz, while the 128MB of memory will run at 620MHz. High clock speeds are an important part of performance, but the Radeon 9700's performance potential comes from its next-generation features, like the fact that it has eight pipelines for processing pixel effects, compared with four in current cards. The new card will also have 256-bit paths to memory, which doubles memory bandwidth and should prevent memory speeds from being a bottleneck.

Military News Boeing, DARPA Extend UCAV Contract
These images are available for editorial use by news media on boeingmedia.com ST. LOUIS, Aug. 08, 2002  Boeing and the Defense Advanced Research Projects Agency, or DARPA, have agreed to terms of a contract extension for the Unmanned Combat Air Vehicle, or UCAV, initiating work on advanced versions of the X-45 UCAV demonstrator aircraft.

That work will put the program on track to provide the U.S. Air Force with initial operational capability UCAVs by 2008. UCAV is the first unmanned system designed from inception for combat. 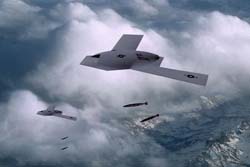 "In three years, Boeing, DARPA and the Air Force matured UCAV from a concept to a system in flight testing," said Boeing UCAV Program Manager Darryl Davis. "We now begin work that will lead to delivering a combat-capable system within six years. We will prove that warfighters can expect to receive combat capabilities sooner rather than later."

The X-45B will be larger and more capable than the X-45A demonstrator aircraft that's currently in flight-testing. The first X-45B is to be completed in 2004 and begin flight-testing later that year. The second will be delivered in 2005.

UCAV is pioneering spiral development; an acquisition process to quickly provide warfighters with essential capabilities and keep pace with developments in technology and warfighter needs by fielding additional capability in subsequent spirals.

During the tests, technicians from the 46th Test Wing will put the F-22 through grueling weather conditions ranging from extreme cold to desert-baking heat. 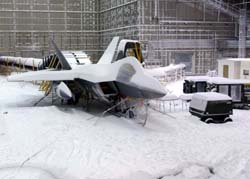 The aircraft does not have to leave Eglin to experience these extremes -- the laboratory provides the weather. It is the world's largest environmental testing chamber and can produce almost any weather condition in the world.

According to Brent Poulson, the F-22 combined test force climatic laboratory program manager, since the F-22 arrived at Eglin in early June, the Raptor has been subjected to cold weather tests such as ? 40 degrees with its engines running, and then ? 65 degrees without an engine run.

"We had eight inches of snow on top of the aircraft and also performed a windblown snow test," Poulson said.

About 70 people from Edwards Air Force Base, Calif., accompanied the aircraft here to analyze how the F-22 performs in weather extremes.

"We've been planning these weather tests since at least 1987, and the tests are an extremely integral part of the program," said Brig. Gen. William J. Jabour, program executive officer for fighter and bomber programs for the assistant secretary of the Air Force. The general visited the F-22 CTF recently while attending a conference here.

"It's especially critical for the F-22 [to undergo the weather tests] because of the materials and coating that give the aircraft its stealthiness." he said.

The laboratory has one main chamber and five smaller chambers. There, test engineers can create an array of weather conditions ranging from a blasting blizzard of blowing snow or a deluge of rain to freezing rain to stifling desert heat or humid, muggy heat; salt fog or sand storms. Temperatures in the laboratory can range from minus 105 degrees to 165 degrees.

During the tests, the aircraft is configured so that all its operating systems are functioning. Engineers use tie-downs and struts so that the aircraft can operate all its systems as if it were flying.

When the aircraft runs its engines, ducting carries the exhaust out of the laboratory. An air replacement system feeds in a vast amount of air that is ingested by the engines at the same temperature as the test chamber and at the same rate that the engine uses the air, Velasco said.

"There were some subsystem engine, support equipment and maintenance anomalies discovered," he said. "That's why we do these tests. We want to find out now so we can fix things."

Poulson, from Edwards AFB, was impressed with the laboratory's capabilities.

"It's amazing to see an aircraft on jacks inside of a hangar running the engines with one afterburner going," he said. "It's also pretty amazing that we can go from 8 inches of snow on the aircraft to 113 degrees in four days."

Upcoming tests for the F-22 include high temperature, high humidity and an assortment of rain tests including freezing, steady and wind-blown rain. The Raptor will also undergo engine icing and cold maintenance demonstrations,