After successfully completing their advanced marksmanship training missions, players will be qualified to select this higher-expertise level in online games. Many of the multiplayer missions in America's Army: Operations, including the Insurgent Camp and Bridge maps, that were released in the initial RECON release, include these roles.

The Marksmanship pack and all new content packs will include exciting gameplay enhancements based on recommendations from America's Army's active player community. In America's Army: Operations 1.01b the Army released the server version of America's Army: Operations. Building upon this enhancement, this update will introduce an in-game server browser for finding missions online, the addition of MILES grenades to the MILES laser-tag-like missions, a TeamTalk option, and green-tinted tracers for the RPK (the opposing force version of M249). Continue to look for additional enhancements to the Operations game interface and functionality as the Army incorporates more player recommendations into America's Army.

With regard to game hosting, the Army tripled the number of official Army servers to 125 since it released the RECON version on July 4. Since the release of the server version of America's Army: Operations the number of authenticated gaming community servers increased to 3,031. The Army also restructured the number of required Basic Training missions so that successful completion of one round of the Military Operations in Urban Terrain McKenna training mission is no longer a prerequisite to qualify for online missions. The Army also increased the penalties for Rules of Engagement (ROE) violations. Friendly fire incidents in the players' initial assembly area will result in an immediate virtual visit to a cell in the Fort Leavenworth, Kan., military prison. Friendly fire incidents in which the fired upon friendly player is within line-of-sight (when the crosshair is green) will double penalty points at twice the rate for incidents beyond line-of-sight.

With over 30 real world firearms, the ballistics system is based on real-world data and, using a comprehensive physics engine, simulates a range of weapon effects including:

IGI 2: Covert Strike is being developed at Innerloop Studios AS, the Oslo-based team that created the original, and is scheduled to be published by Codemasters this autumn on PC CD-ROM.

New Screens: Specnaz Project Wolf
We have the first seven screenshots to be released of Bluebytes first-person shooter, Specnaz Project Wolf. Specnaz is built on the outdoor 3D engine (Amoeba), in which the main character passes through real environments and uses real weapons.

SPECNAZ is a shortcut of the military name SPECIALNOGO NAZNACENIYA, which means SPECIAL FORCES. The same term, in Russian language, is also used for the western special units SAS or American units called DELTA FORCE. In 80's, western analysts were using this word also for some so-called ELITE FORCES of the Russian armed forces. This caused the effect that SPECNAZ is considered as a sole component comparable with American SPECIAL FORCES

Strategic Command offers 6 major campaigns- Fall Weiss, Fall Gelb, Barbarossa, Fall Blau, Zitadelle, Overlord which begin from 1939 to 1944. Each Campaign can be played beyond historical end of war date and into 1946! Game play is turn based with each turn lasting from 2 weeks to 1 month depending on the season. Designed for replayability and realism, options include fog of war, Free French forces, Partisans, scorched earth, thoroughly implemented features for sea transport, amphibious assaults, strategic bombing, industrial production, research and development, declarations of war, historical and random nation neutrality and allegiances as well as other political mechanisms.

Pritchard took the honor of being the first pilot to trap aboard the carrier July 24 in the Navy's newest fighter, the F/A-18E Super Hornet, as it gets underway for its maiden combat deployment with Carrier Air Wing (CVW) 14. 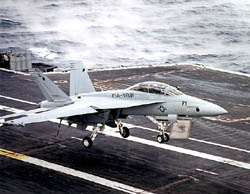 "Personally, it's exciting for me because it is the first deployment I've ever done, and you don't sign up just to train, you sign up for combat," Pritchard said. "The fact that the Super Hornet is a brand-new jet on its first deployment is very exciting because nobody has done that in the 19 years since the first Hornet came out."

The trap was a major event for the squadron, according to Cmdr. Jeff Penfield, the squadron's commanding officer.

"The first trap was a major milestone for the Super Hornet program, for naval aviation, and this squadron," said Penfield. "A lot of people throughout the Navy team, the industry team, have been working very hard to get this plane out on its first deployment. A lot of dedication -- a lot of long hours. It was huge for them. You can't overemphasize enough how much it means to the whole team to have the plane out on deployment."

The Eagles of VFA-115 and Lincoln are likely to support Operation Enduring Freedom during their deployment. The $57 million fighter will serve not only as a fighter-interceptor, but also as a tool of force projection, by conducting combat missions in hostile skies when needed.

If called to combat, the Super Hornet gives warfare commanders not only the option of extended range but also increased firepower.

As with all new innovations, concerns about reliability and performance are in the minds of the warfare commanders and those using the equipment.

In Pritchard's mind, there's nowhere he'd rather be than in the cockpit of the Super Hornet.

"I think even though it is a new jet, we put it through an entire set of workups. We've really had a good chance to troubleshoot the jet, groom them, getting them down to where we like them, so I don't think we'll have any problems," he said. "To be honest, I was excited by the jet when I came into the program. I'm a Super Hornet baby because it's all I've ever flown. I had high expectations, and it's beat every one of those. The whole jet is awesome."

Part of the Chief of Naval Operations' overall vision of "Sea Power 21," the Super Hornet's greater firepower, endurance and its multi-mission capabilities as an all-weather strike fighter, are quickly proving that it is much more than just the new kid on the block.

Long-lead materials consist of the main engines, generators, controllable pitch propellers and reduction gears, among other items. Advance procurement is necessary for these critical long-lead items in order to exercise vendor option rates. 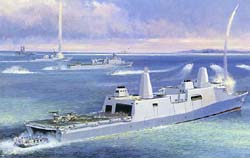 To date, the first four ships awarded in the 12-ship LPD 17 program are under contract. LPD 17 and LPD 18 are presently under construction at all three locations of Northrop Grumman Ship Systems in New Orleans and Pascagoula and Gulfport, Miss.

The first ship is approaching 50 percent completion in unit erection at Avondale Operations in New Orleans. In October, the keel for the second ship, USS New Orleans, will also be laid at Avondale.

The LPD 17 amphibious transport dock ships are designed to be 208.4 meters (684 feet) long and 31.9 meters (105 feet) wide and will replace the functions of the LPD 4-, LSD 36-, LKA 113-, and LDT 1179-classes of amphibious ships. The ship's mission is to embark, transport and land elements of a landing force in an assault by helicopters, landing craft and amphibious vehicles to conduct an amphibious warfare mission.