PC News New Screens: LOMAC
What would a Friday be without new screens from Lock On: Modern Air Combat. These new screens show the interface to determine system failures during a mission and the interface to create weather conditions. If you missed it, check out today's exclusive interview with Matt Wagner about Lock On. 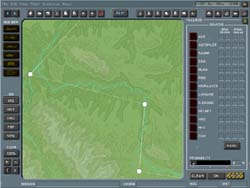 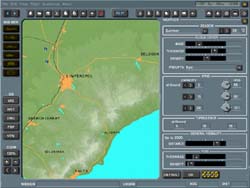 Stryker is a family of eight-wheel drive combat vehicles easily transported in a C-130 cargo plane. The Army has deployed 13 Stryker vehicles as part of its forced entry package for Millennium Challenge 2002, the Joint Forces Command field experiment and demonstration, which runs from July 24- August 15. The Strykers were deployed from C-130 and C-17 aircraft during the exercise.

"We will be doing an airborne operation followed immediately by the assault landing of the Stryker vehicles," said Gen. William Kernan, chief of U.S. Joint Forces Command at a July 18 briefing. "And they will subsequently be looking at repositioning those from intra-theater (C-130) airlift to rapidly take advantage of an opportunity that we create."

Traveling at speeds of 62 mph on highways, Stryker has a range of 312 miles. In the Mobile Gun System configuration, it carries a General Dynamics 105mm tank cannon in a low-profile, fully stabilized, "shoot on the move" turret. Its armor protects the three-soldier crew from machine gun bullets, mortar and artillery fragments on the battlefield. The Stryker Mobile Gun System can fire 18 rounds of 105 mm main gun ammunition; 400 rounds of .50 mm ammunition; and 3,400 rounds of 7.62 mm ammunition. It operates with the latest C4ISR equipment as well as detectors for nuclear, biological and chemical weapons.

Hellenic Air Force's Completes Live Fire Exercise
The Hellenic Air Force destroyed a sub-sonic target during the first live firing of its Patriot Air and Missile Defense System today at the NATO Missile Firing Installation on the island of Crete. Telemetry data from the test confirmed that the missile scored a direct hit on the target. 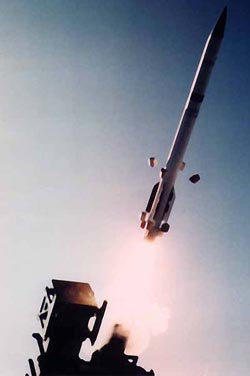 The test of the Patriot Guidance Enhanced Missile system was conducted under operational conditions against a sub-scale drone simulating a cruise missile. The target was flying at an altitude of 5 kilometers and at a range of 30 kilometers. During the test, the Patriot Fire Unit was manned and operated by Hellenic Air Force crews assigned to operational Patriot Fire Units. According to the Hellenic Air Force, the target was successfully tracked by the system's radar and subsequently engaged and destroyed.

"Today's firing confirms both the readiness of the Hellenic Air Force's Patriot System as well as the readiness of the Hellenic Air Force to operate and maintain it," said William H. Swanson, president of the Raytheon Company. "This important test firing validates Patriot as a key component of Greece's national defense system and continues Patriot's perfect record of succ essful international test flights."

The test was designed and conducted under the control of the Hellenic Air Force and verifies acceptance of the Patriot equipment by the Hellenic Ministry of Defense.