Community Working on SH2
Wolfpack League is currently working with Ubi and Ultimation to replace the flawed Rtime engine with Directplay in Silent Hunter 2. Efforts are also being made to adjust Silent Running, Reload times. Click here for more details.

The single player campaigns offer tactical operations with soldiers, armed vehicles and assistance by long-distance weapons. In the multiplayer and skirmish mode, however, one plays a classical real time strategy game with resources and structure of building. Three different degrees of difficulty (a riser, soldier, veteran) for an appropriate challenge with higher in each case AI and aggressiveness of the enemies ensure. The player can advance toward more experienced units - the more fights to project, the better they will be able to maintain their units with the next attack. Screenshots

New Screens: 1914: The Great War
1914 - The Great War, is a turn-based strategy game from German developers TriNodE Entertainment and published by Fishtank Interactive/JoWood. Beginning in 1914, the game will not be limited to this year and will include a total of 30 missions, where players can choose between playing either as the Allied forces or as the Germans. With more than 60 units from Germany, France, Great Britain and the United States, there will be plenty to choose from.

The units are upgradeable, and success for the player means those ever-important opportunities to earn medals and recognition for the hard fought work of their soldiers. The team at TriNodE has strived to make sure that a multiplayer mode is present with up to four players engaging in the war (with two players on each side). Screenshots 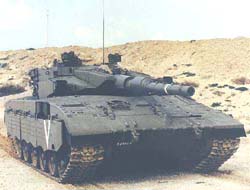 The Merkava's upgraded fire control and sighting system includes computerized ballistic calculations and compensation, a dual-axis stabilized gunner sight and a dual-axis stabilized commander panoramic sight, both with day, FLIR and TV channels. An improved auto tracking system enables tracking while on the move of moving ground targets and helicopters, and firing with a higher hit probability.