PC News New Screens: LO:MAC
We have a couple of new screens from Ubi Soft's upcoming jet simulation, Lock On: Modern Air Combat. One picture shows an SA-10 SAM system firing at an enemy aircraft. The second shows a player-flyable Su-39 firing an anti-radar missile at a SAM site. 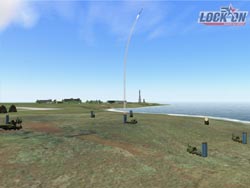 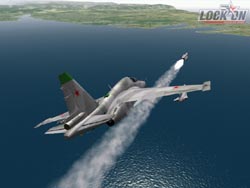 The Sum of All Fears Demo
The Sum of All Fears Demo is now available for download. The demo features 11 missions, multiple difficulty settings, plus a comprehensive training level. An easy-to-use interface that lets players dive right into the action. Use the latest in anti-terrorist weaponry, including 15 unique gun types, flashbangs, and frag grenades. Six brand-new dedicated multiplayer spaces, playable on Ubi.com. Competitive and cooperative multiplayer support, including classic and all-new game types for solo and team play.

Valve Partners With Day Of Defeat Team
Valve Software has formed an official partnership with the Day of Defeat team for the continued development of Day of Defeat, the popular World War II mod. Like Counter-Strike, Day of Defeat is a team-based game built on Valve's award-winning action game Half-Life, but it is set during World War II rather than in the present day. Players assume the role of one of five types of Axis or Allied soldiers in Western Europe, and they work with their team to complete various objectives, such as capturing an enemy area, defending a beach, or destroying enemy forces. Day of Defeat 3.0 will launch next week with new missions and gameplay types, a new player class, and other improvements.

The SM/SLS contract was awarded by the Naval Sea Systems Command and is valued at $49 million over five years to Northrop Grumman's Information Technology (IT) sector. Additional performance-based award options bring the potential value of the contract to $106 million over 10 years.