L0:MAC Slips Again
In case you missed it, in his Producer's Journal last week, Matt Wagner, Ubi Soft Producer, officially announced that the release date for Lock On: Modern Air Combat has been pushed back to January 2003. Originally slated for release this fall, setbacks such as the loss of some key personnel to career changes and illness have caused this recent delay. Check out the Matt's Producer's Journal

Military News First Two 'Super Hercs' for Italy
Lockheed Martin Aeronautics announced that the Government of Italy has accepted the first two of 10 "stretched" C-130Js on order for the Aeronautica Militare Italiana (AMI, Italian Air Force). This version of the C-130J, designated CC-130J by the U.S. Air Force, is now known around the world for its tremendous range, speed and lift capability. These aircraft will be ferried to Pisa, Italy, where the AMI's 46th Air Brigade will operate them. 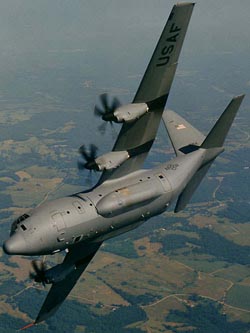 Italy is Europe's second largest C-130J operator, with a total of 22 aircraft on order. The United Kingdom's Royal Air Force has 25 C-130Js, and Denmark has three on order with an option for a fourth. Several other European countries are poised to select the C-130J to meet all their airlift needs.

The Italian configuration of the C-130J is among the most sophisticated yet developed for the aircraft. It has a highly advanced suite of communications and defensive systems that include U/VHF combined multiband radios and a laser warning receiver system. In addition, it is the first C-130J "receiver-tanker" built. A receiver-tanker has the ability to both refuel other aircraft as well as being refueled itself during flight -- a true "force multiplier" that provides the operator with greater flexibility in performing strategic or tactical transport missions.

The test of the LAM missile began at approximately 11:15am EDT on June 17 when the missile was released from Aurora's "Chiron" carrier aircraft. Following separation from the vehicle, the missile flew an autonomous loiter pattern 30 miles in length, successfully hitting all of its pre-programmed waypoints. Following completion of its 12 minute mission, the missile flew several miles to a designated impact area, deployed its onboard parachute, and successfully returned to the ground. The test flight successfully demonstrated the performance of the missile's propulsion system, supplied by Hamilton Sundstrand as well as the control actuation system, supplied by Moog, Inc. The flight guidance system was a GuideStar GS-111, produced by Aurora's sister company, Athena Technologies. Athena provided all of the control law design and flight software.

"Several factors were key to the LAM success," said company President John S. Langford. "It was a fully autonomous flight, with no human intervention between launch and recovery. It was air-launched, deployed from our Chiron carrier aircraft. And it was flown out of NASA's Wallops Island, which is a convenient operating base and test range right here in Virginia. Together, these three factors dramatically increase flexibility at the same time they decrease program risk and cost."