Cougar HOTAS Links
Dr. James Hallows sent us a new Cougar Hotas links page. Everything you wanted to now about the Cougar HOTAS and weren't afraid to ask. This comprehensive page provides links to articles that have appeared on the net relating to the Cougar HOTAS.

Medal of Honor Movie 4 Released
Electronic Arts has released movie 4 of 4 for the Normandy Campaign (Mission 3 Level 1)from the upcoming title "Medal of Honor: Allied Assault". 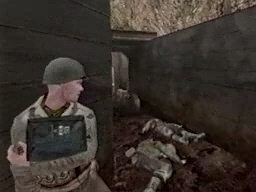 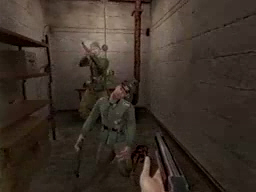 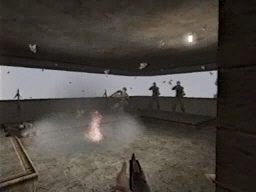 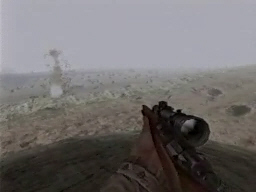 Officials at U.S. European Command here said that since Dec. 28, 1998, Saddam Hussein has opted to challenge this enforcement by firing at coalition aircraft with surface-to-air missiles and anti-aircraft artillery and by targeting them with radar.

Operation Northern Watch aircraft respond in self-defense to these threats, while continuing to enforce the no-fly zone, officials said.

B-2 Quick-Turn Proves Combat Capability
People from the 325th Bomb Squadron made history July 28 and 29 when they flew back-to-back 21-hour sorties in just 45.5 hours using the same aircraft. That aircraft, the B-2 "Spirit of Kansas," performed flybys both days at the Royal International Air Tattoo at Royal Air Force Cottesmore, England. 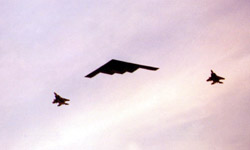 A B-2 Spirit bomber is flanked by two F-15C Eagles.

The mission let people from the squadron test their combat capabilities. Maintainers performed a quick-turn on the jet in just 3.5 hours, surpassing the Air Combat Command standard of four hours.

Meanwhile, aircrews flying the Global Power mission practiced bombing en route while perfecting their endurance in long-distance flight. The crews performed three aerial refuelings, one with a KC-10 Extender and the others with a KC-135 Stratotanker. During the two flights, the B-2 drank 235,000 pounds of fuel.

"The flights went well," said Lt. Col. Bob Wheeler, 325th BS commander. Wheeler and Col. Jonathan George, 509th Operations Group commander, flew the bomber July 28. Maj. Scott Trotter and Capt. Chris Larson, also from the 325th BS, performed the July 29 flyover. "We came back Code 1: There were no write-ups," Wheeler said. "It's a true testament to the combat capability of the jet and, most importantly, the crews who maintain it." The quick-turn was a "real team effort," Wheeler said. The aircraft landed July 28 at 6:40 p.m. for the scheduled turn. "It looked like a pit stop at a NASCAR event," he said. "The folks who prepped it did outstanding, ensuring it was performance-ready for the (next) flight."

Senior Airman Eddy Crissen, 325th BS assistant dedicated crew chief, said the goal is to send another safe jet into the air, and that is just what the eight-member quick-turn team did. "It gives me a lot of pride in our aircraft and team," Crissen said. "We work together daily to complete our mission. I'm proud of the 325th team."

The England team included nine maintainers, four pilots and two intelligence officers from the 325th and 393rd bomb squadrons. The teams were split into two groups; one stayed at Cottesmore for the flyover and the other went to RAF Mildenhall, England, should the jet be forced to divert.

Staff Sgt. Tracie Welling was one of the people who went to England. She is a 325th BS communications, navigations and mission management specialist, and she said it was important for the B-2 to fly over the RIAT at Cottesmore.

"It's important to remind people of the B-2's long-range capabilities, which helps with the Air Force's role of deterrence," Welling said. "It's also nice to be able to share the B-2 with our allies" through the flyby, Welling said.

RIAT, founded in 1971, is a yearly international air show event featuring 400 aircraft from 35 countries. It is considered one of the world's largest aviation gatherings. This is the second year the B-2 participated in the event.

The bomber was met over the Atlantic by two F-15C Eagles from RAF Lakenheath, England. The fighters escorted the B-2 to the air show to prevent foreign aircraft from getting too close, eliminating potential safety issues.

Having the air show at Cottesmore lent a historic note to the event, Wheeler said. During World War II, United States bombers were escorted by long-range fighters out of bases like Cottesmore which made the difference in the war.