Air Warrior III Screenshots
Technical Art Director, Jeff Hanna, sent us a link to some new in-game (testbed) screenshots of the upcoming Air Warrior III. All we can say is "WOW!" Jeff cautioned us to say that these were just early shots and a lot of changes are expected before the final version is released. Looks like Kesmai Studios - EA.com is on the right track. Click here for more Air Warrior III in-game shots. 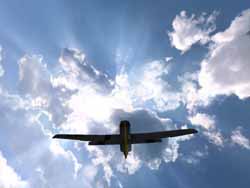 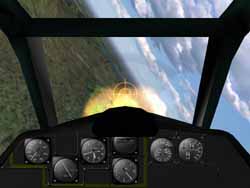 Aces High - PRICE SLASHED!
The premier WWII air, land, and sea combat MMOG cut its monthy subscription fee in half today! The game, HiTech Creations's Aces High, has consistently won "Best of . . ." awards from us here at COMBATSIM.COM and virtually every other publication covering simming. If ever there was a complaint about the game it was its steep monthly price of $29.95. Well, air combat fans can rejoice as this price just became $14.95 as of today. Check out the buzz over the price slash at the Aces High forums found here. Check our articles about Aces High here.

Conquest: Frontier Wars Ships
Ubi Soft announces that the Sci-Fi Real-Time Strategy Game, "Conquest: Frontier Wars", is now shipping in North America. Set in the late 22nd century, the human race found means to explore the outer rim of the galaxy through a powerful cosmic phenomenon: wormholes. But what they encountered on the other side would thrust the species into interstellar chaos. The Players goal as a commander will be to explore and secure sector after sector of the galaxy. With a fledgling fleet under your command and orders to investigate and explore, you enter an epic struggle for galactic domination. Master the technology and tactics of three clashing races as you control strategic jump gates, maintain precious supply lines, and forge an empire from hundreds of unique units to attain total control of the galaxy.

Rogue Spear: Black Thorn Website Launched
Ubi Soft has announced the launch of the official Rogue Spear: Black Thorn website. The site will include, regular updates, interviews, weapons information, artwork and wallpaper, as well as, exclusive competitions. Rogue Spear: Black Thorn is a new stand-alone mission pack. Players are faced with familiar ground; however, for the first time, copycat terrorists are re-creating some of the most dangerous terrorist acts. You must discover if the acts are random or if there is a single mastermind controlling this deadly operation. Release Date: December 2001.

Freedom Games Takes Over GI Combat
Freedom Games Inc., today announced it will be taking over the development and publishing of GI Combat from Talonsoft. "GI Combat" is a continuous time strategy game, engulfing the player in the dynamic conflicts of the Second World War. The full 3D environment combined with solid historical research and a continuous time play will make for a mix of realism, beauty, and action. Players campaign with American or German troops through tactical excursions of historical significance. Whether it is commanding a group of squads to eliminate an enemy strong point, or using armored vehicles to blitz enemy positions, "GI Combat" excels at delivering the complete combat experience. A simple menu and icon driven interface will assure the player complete control over the gaming environment and allow for easy access to game data. The title is expected to ship in the spring of 2002.

"GI Combat" will feature campaigns with dozen of historical and hypothetical scenarios beginning at D-Day, and carrying through Patton's lightening breakout from the Normandy Beachhead. In addition, multiplayer mode is planned via LAN or TCP/IP allowing players to choose sides and fight against each other. Vivid 3D landscaping built in our own proprietary world builder provides the backdrop for beautifully rendered armored vehicles such as the German Mark V Panther or U.S M4 A1 Sherman.

Shogun: Total War Warlord Edition Ships
Feudal Japan resurrects itself in Shogun: Total War Warlord Edition, has shipped to retail. The Warlord Edition builds upon the excitement found in the original Shogun with the inclusion of Kublai Khan's invading Mongol hordes that try and conquer Japan in the greatest external threat the Samurai ever faced. Players take on the role of a sixteenth Century Japanese general -- the Daimyo (clan leader) -- and can play from either side by assuming the role of Kublai and the Mongols or engage in battle against them. In addition, players can take on the role of one of Japan's greatest Daimyos to fight their infamous battles in the "Campaigns of the Three Unifiers." The game includes 10 new battlefield units, new region upgrades, including new buildings such as the Drill Dojo, to improve holdings, multi-player games, and Map and Scenario Editors.

Balkans Powderkeg Patch For RP5
The Balkans Powderkeg team is hard at work developing a patch to bring the Balkans Theater to RP5. Version 1.1 will be an update to v1.0. No need to download the entire 20 MB theater file again. Only the changed files with our one click Installshield.

While everyone enjoys RP5 in a Balkan environment, the next major release will be v1.2 (trees and forests, dynamic campaigns, new 3D models). Release Date: Q4 2001.

Boeing Offers ROK SLAM-ER In Bid To Boost F-15K's Chances
In an attempt to boost the company's chances of landing the contract for the Republic of Korea's lucrative new fighter programme, codename F-X, Boeing has offered the Asian country use of its Standoff Land Attack Missile Expanded Response (SLAM-ER) missile, following US Government approval. The offer must be viewed as a bid to sway the Koreans toward selecting Boeing' s F-15K fighter for the programme, as it is the only aircraft under consideration that has the capability to carry the missile. 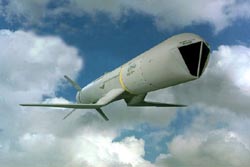 US approval clears the way for the Republic to become the first non-US SLAM-ER customer. The weapon, which Boeing produces for the US Navy, utilises Global Positioning System data and an infrared seeker with an advanced data link for precise attacks against targets on land or at sea from long ranges. Boeing says its range exceeds 150 nautical miles.

"SLAM-ER is an excellent weapon that provides long-range strike capability around the clock in virtually any weather. It would add even more modern combat power to the F-15K," said Mike Marks, Boeing vice president and general manager for US Air Force Fighter and Bomber Programmes, and Weapons Programmes.

Boeing's F-15K, is in competition with the Rafale of French Dassault Aviation, the Eurofighter Typhoon of the European Aerospace Consortium, and the Russian Sukhoi-35, to secure the contract for $3.3 billion project. Despite Boeing's decision to up the ante with the SLAM-ER offer, the company has repeatedly refuted the allegation that without this contract the F-15 will be retired.

The contract could have a major bearing on the continued strong relations between the US and the Republic of Korea. The US provides a strong military presence in the Republic as a deterrent to communist North Korea and this has given US contractors an important edge in procuring South Korean defence contracts. It seems that the US government has cleared the way for the proposed sale of the SLAM-ER in order to maintain this status quo. (Boeing Photo)

USAF Tests Next Generation F-15, F-16 Avionics
The 53rd Wing here deployed its 85th Test and Evaluation Squadron to Nellis Air Force Base, Nev., for most of July to test the next generation of avionics for the F-15 and F-16 fighters. The squadron tested the Modular Mission Computer, its M2.3A+ software, and the Suite 4M and Suite 4E software in an operationally representative environment.

Considered the "brains" of the aircraft, avionics systems run all of the aircraft's electrical elements, such as the central computer, radar, munitions and electronic warfare receivers and jammers. The MMC hardware and M2.3 software are the next upgrade for the F-16 Fighting Falcon. The Suite 4M software will upgrade the F-15A/B/C/D Eagle, while Suite 4E is designed for the F-15E Strike Eagle. The software is usually referred to as the Operational Flight Program, or OFP. 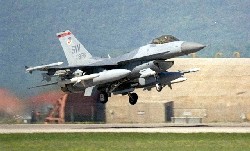 During a large force exercise at Nellis, the new avionics systems were put through the paces for about three weeks to make sure they worked as advertised and to catch any glitches before fielding them to the Air Force's entire fleet of Falcons and Eagles.

Several technological advancements are in store for the next generation of military fighter avionics. Enhancements to the F-16 include color displays, a modular design for easier repairs and other subtle differences like improved data link, said Maj. John Breazeale, 85th TES F-16 program requirements officer.

"The biggest change is the color display," Breazeale said. "There's a lot of information on those displays and we continue to pack in more. The color coding builds your situational awareness and makes it a lot easier to decipher the information quickly."

The MMC's modular construction also has computer cards that can be quickly pulled out and replaced to fix problems rather than removing the entire computer.

The tests were successful, according to Breazeale.

"We got to see how the OFP worked in a dense environment and it handled well," Breazeale said "We're pleased with the enhancements over the current ... software. Overall, the MMC is a big step in the right direction." 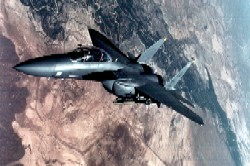 The F-15s flew simultaneously with the F-16s and tested their own software upgrades. The new software is "like going from Windows 98 to Windows 2000," said Maj. David Krumm, 85th TES F-15 program requirements officer. This upgrade increases the F-15s current capabilities, adds some new ones, and also enhances the display.

"Suite 4 enables us to shoot the AIM-9X missile, use the Joint Helmet Mounted Queing System [a new helmet with displays on the visor], and gives us additional weapons capabilities," Krumm said. "It also fixes some previous anomalies and completely upgrades everything the central computer controls like the radar, radar warning receiver and the jamming system."

The Eagle pilots were pleased with Suite 4 after testing, Krumm said. 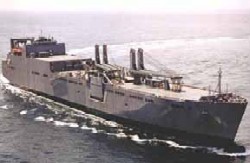 "Delivery of the Pomeroy continues NASSCO's string of successes with ships in this class," said Richard Vortmann, NASSCO President. "Like its predecessors, the Pomeroy was delivered ahead of schedule, under target cost, and with zero quality discrepancies."

This ship is named in honor of Private First Class Ralph E. Pomeroy, who was posthumously awarded the U.S. Army Medal of Honor for his heroic actions in Korea in October 1952.

The sealift new construction ships are large, medium-speed, roll-on, roll-off ships (LMSRs). The ships are assigned to the U.S. Navy's Military Sealift Command, and are prepositioned to quickly deliver U.S. Army tanks, armored personnel carriers, tractor-trailers, and other equipment and supplies to potential areas of conflict around the world. The ships also can provide surge sealift support of remote military actions. Their multi-use capabilities make these cargo ships among the most flexible ever built.

The USNS Pomeroy is 950 feet in length, has a beam of 105 feet and displaces approximately 62,000 long tons when fully loaded. The ship has over 390,000 square feet of cargo carrying space. The gas turbine-powered ship will be able to sustain speeds up to 24 knots when fully loaded.

"You can't get where JSF has to go by doing business as usual," said Frank Statkus, Boeing vice president and JSF general manager. "We had to prove that our solution is not only the best, but also the lowest-risk as well. We did that in large part with breakthrough usage of modeling and simulation. Then we proved it works during 66 flights in our X-32A and 78 flights in our X-32B. I can honestly say we delivered as promised." 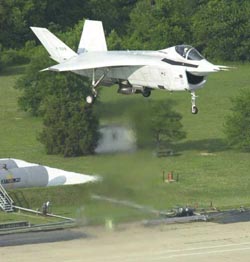 During the concept demonstration phase of the JSF program, contractors had to demonstrate commonality, naval-variant low-speed handling qualities and short-takeoff-and-vertical-landing (STOVL) capability.

During the X-32B flight-test program, pilots smoothly and rapidly (in one to three seconds) converted from conventional flight mode to STOVL mode and back more than 150 times in flight, consistently demonstrating the key component to operational STOVL flight.

A competition winner is scheduled to be selected in late October.