US Missile Defence Test Hits Sweet Spot
The test of the ground-based ballistic missile defence system July 14 was almost a complete success, Ballistic Missile Defence Organisation officials said last week. The exoatmospheric kill vehicle landed a knockout punch on the re-entry vehicle hitting the "sweet spot" almost squarely, said Army Maj. Gen. Willie B. Nance Jr., the programme executive officer for the project, briefing reporters at the Pentagon. The intercept occurred about a foot and a half behind the nose of the re-entry vehicle, Nance said. 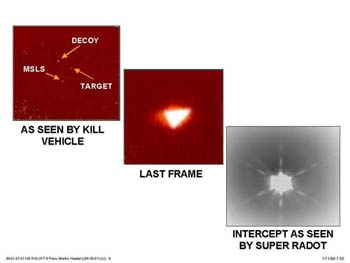 "The largest piece of debris that we saw, based on all the radar tracks and data that we had, was about a six-inch size piece of debris in any dimension. And that's debris that's left over from the kill vehicle and the re-entry vehicle after the intercept," he said.

Of the 23 items tested in the flight, only one did not work. "The system and the elements performed for the most part as expected," he said. "We did have one anomaly, ... the ground-based radar prototype, which is a prototype of the X- band radar. It is located at Kwajalein missile range.

"The last objective that we wanted it to perform was to switch its track from the re-entry vehicle to the kill vehicle and report if it could hit, and so conduct as an objective its ability to perform hit assessment. It did not successfully do that. And it was a software issue. We have determined the cause of that problem."

About a minute before intercept, a database locked up when the software wouldn't permit testers to enter and delete a single-track file in the same cycle.

"We've already made the adjustment and we're ground-testing that," Nance said. The next test is set for October and BMDO plans to fly the same test in terms of the target, target complex and the structure of the elements in the test flown in July. Each test costs about $83 million, Nance said. 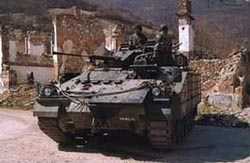 The number of vehicles to be converted with BGTI equipment is around 700 with the upgraded vehicles entering service in 2003.The UK MOD is currently reviewing the future shape of the Army and there is a possibility that further contractual options will be exercised to procure additional BGTI systems.

BGTI will replace the existing image intensified systems on the Warrior and CVR(T), with a system which delivers a 24-hour operating capability as well as enhancing the detection, recognition and identification of targets in poor visibility. This upgrade the first step in the longer term plan to improve the capability of the Warrior fleet.

Speaking from the company's site in Glasgow, Tom O'Neill, managing director of Thales Defence Optronic Systems and chairman of Thales Optronics, said: "Adoption of the BGTI system by the UK Armed Forces is an important step for the British Army and will greatly enhance the export potential of this system. In particular, the BGTI gunner's sight offers high performance at an affordable cost. A 24-hour night fighting and improved situational awareness capability is essential for today's battlefield and our workforce in Glasgow, Staines and Taunton are delighted that the UK MOD has selected this system."

This is the largest order ever received by the Glasgow-based business and will help safeguard employment over a seven year period at the Thales Optronics facility in Glasgow.

Greece's Hellenic Air Force will receive 55 of the systems for its F-16s. The US Navy will get 39 for its F/A-18E/F Super Hornets while the US Air Force will get 28 for its F-16s and nine for F-15s. Deliveries begin in mid-2002 and are to be completed about a year later. The contract also includes a spare F-15 system, and options for Greece to order up to 10 additional systems and the Royal Australian Air Force to order six.

JHMCS continually displays flight information on the inside of helmet visors, keeping that data in sight at all times. It also allows aiming or deploying sensors and air-to-air or air-to-ground weapons with little more effort than looking at a target and pressing a switch.

The US military, expected to order approximately 1,500 systems, plans to install JHMCS on F-15, F-16 and F/A-18 aircraft. Boeing is the primary integrator for JHMCS while Vision Systems International manufactures the system.

This is the second Joint Helmet low-rate production contract Boeing has received in the past year. In August the company was awarded a $10.4 million contract to produce 37 JHMCSs for the Super Hornet. 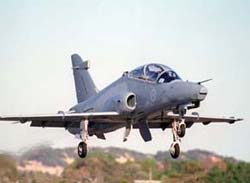 "The final delivery of the Australian-assembled Lead-in Fighter is testament to the commitment and talent of the Defence Materiel Organisation and BAE SYSTEMS project teams. By refining their final assembly skills, the Hunter Aerospace team were able to reduce the final assembly timescale from the originally planned 26 weeks to an 18 week cycle," said Weston.

Air Marshal Angus Houston, said the Lead-in Fighter Hawk will be used to train RAAF pilots for the demands of front-line service well into the new millennium.

The Lead-in Fighter contract was signed in 1997 and design, development, manufacture and creation of the support infrastructure were established in just three years. The $15 million Lead-in Fighter Support Facility was opened in April 1999, final assembly commenced in October 1999, and the Hawk Lead-in Fighter entered service with the RAAF in October 2000. 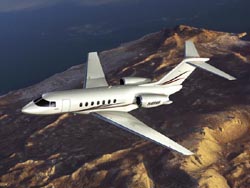 "The aircraft was everything we expected and more," said Carr. "Performance and handling qualities were exactly as expected. Controls were very responsive and predictable. We're ready to go up again."

The Hawker Horizon, which is one-third larger than the company's mid-size Hawker 800XP, offers an outstanding combination of range, speed and cabin size. An NBAA IFR range of 3,100 nm at Mach .82 is guaranteed for the Horizon, promising the ability to cross the U.S. non-stop against almost any wind. A maximum range of 3,400 nm provides trans-Atlantic capability and additional performance flexibility.

The Horizon fuselage is made with the advanced composite technology used on Raytheon Aircraft's Premier I entry-level business jet. The Premier I's fuselage is built in two sections, and the much larger Horizon fuselage is built in only three sections and features a 72-inch stand-up cabin and 77.5-inch width. A flat floor runs the entire length of the aircraft, leading to a large, 105-cubic-foot aft baggage area. The baggage compartment is accessible on the ground through an exterior door or during flight through the cabin.