In addition to a story-driven single-player experience, "Return to Castle Wolfenstein"'s multiplayer mode includes a series of combat scenarios. Gamers will join as an axis or allied soldier and be challenged to, campaigns like storming beachheads, infiltrating military installations, holding strategic positions, and more. The game features multiple objectives spanning a variety of maps, including an Axis airbase, a war-torn German village and a secret Nazi laboratory. "Return to Castle Wolfenstein" features four different character classes -- soldier, engineer, medic and lieutenant. Each class has unique attributes and the ability to access different ammunition and equipment that compliments their style of warfare.

Final eFalcon Released
With the announcement of Falcon 5, the cease and desist on F4 code hacks went out. The last of these, V1.10 came out yesterday. eFalcon website.

Allied Aircraft Bomb Iraq Air Defenses
BERLIN (Reuters) - Allied aircraft bombed Iraqi air defenses on Tuesday after coming under fire while patrolling a no-fly zone in the north of the country, the United States European Command based in Germany said in a statement. The statement said aircraft of the joint U.S.-British force had come under Iraqi anti-aircraft fire while patrolling north of the city of Mosul. [More...] 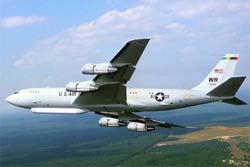 "We're particularly excited about this delivery because we know we've taken a system that has proven itself time and again and made it even better," said Col. Gary Connor, director of the Joint STARS Joint Programme Office.

The Block 20 E-8C's contain commercial-off-the-shelf (COTS) technology computers for operating the Joint STARS surveillance equipment. Each aircraft uses 20 AlphaServer ES40CV systems from Compaq Computer Corporation, running the OpenVMS operating system. Eighteen of those systems will function as workstations, one as a central computer and one as a central backup.

"By using commercially available computer systems, we are able to provide the customer with increased reliability, advanced technologies and increased processing power, all while achieving the original goal of this programme - to provide lower cost per aircraft," said Frank Moore, Airborne Ground Surveillance and Battle Management (AGS&BM) Systems vice president and Joint STARS Integrated Product Team leader. "This may be the largest integrated application of COTS technology in a weapons system anywhere in the Air Force."

Northrop Grumman's ISS is the prime contractor for the E-8C Joint STARS, an advanced airborne surveillance and target acquisition system that provides real-time, accurate information about vehicles on the ground and slow-moving aircraft for peacekeeping missions and battlefield decision-making.

Eventually all the existing Block 10 aircraft will be upgraded to Block 20. The first Block 10 plane is scheduled to be brought in for upgrading in November and is expected to roll out in February or March 2002.

Successful Helicopter Trial For RV Triton
A Royal Navy Lynx Mk 8 helicopter has successfully carried out a series of landings and take-offs from the deck of RV Triton the world's first trimaran warship demonstrator owned by QinetiQ (formerly DERA, the Defence Evaluation and Research Agency). 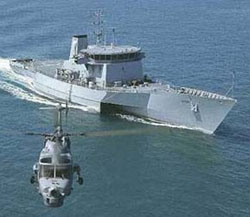 Funded by the Defence Procurement Agency, DPA, this was the latest success in RV Triton's demanding trials programme and the first time ever that a helicopter has landed on a trimaran.

Since delivery to QinetiQ in August of last year the ship has conducted a series of sea keeping and structural trials together with major Naval Operations trials, which included a replenishment at sea (RAS) with RFA Brambleleaf.

Whilst visiting the USA's East Coast, RV Triton carried out side by side trials with the US Coastguard's USCGC Campbell. These included manoeuvring, sea keeping and comparative powering using a number of different bearings and ship's speeds.

Leading into the major structural trials phase over the autumn and winter of this year, RV Triton is currently engaged in a series of hydrodynamic trials. The trials programme has been very successful with results validating the earlier research and proving that the trimaran hullform can perform as well as, and in many cases better than, the monohull. 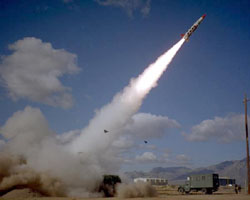 The Block II missile has a range of more than 80 miles (128 km). The missile is being developed under a manufacturing development contract for the US Army TACMS/BAT Project Office. The contract was originally awarded to Lockheed Martin Missiles and Fire Control in July 1995. A Low-Rate Initial Production contract was awarded in June 1999.

The BAT submunition, produced by Northrop Grumman, has the lethality and intelligence to search out and destroy moving armour. The BAT submunitions are dispensed from Army TACMS by a gas bag management system. Once the Army TACMS warhead skin separates from the missile, the gas bags inflate, pushing the BATs out of the missile body. The BATs then activate and begin searching for targets. 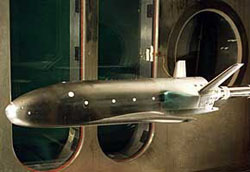 A small scale model of the Boeing X-37 was tested to examine the effects of airflow on the vehicle's aerodynamics at speeds ranging from Mach 1.5 to 5.0 (roughly 1,050 to 3,500 mph). This was part of Phase II of the Boeing X-37 wind tunnel test program.

"This phase of our wind tunnel test programme evaluates the frozen vehicle lines, or exterior shape," said Colin McKinney, a Boeing aerodynamic engineer. "Data from these tests will be used to generate the final verification database from which the flight controls system will be designed, leading to developing its avionics and software that flies the vehicle during the autonomous (self-flying) entry phase."

Derived from the Air Force's X-40A, a Boeing prototype space manoeuvre vehicle, the X-37 is an offspring of the NASA Pathfinder Program, which focuses on reducing the cost of space access through advanced space technologies. In December 1998, NASA entered into a four-year cooperative agreement with the Boeing Company to develop the Future-X Pathfinder flight demonstrator vehicle, now known as the X-37.

The X-40 and X-37 contain some similarities, but differ slightly in configuration, McKinney said. An autonomous (self-flying) vehicle, the X-37 is about 27 feet long and weighs about 7,000 pounds. Powered by an AR-2/3 engine, which uses JP-10 jet fuel and hydrogen peroxide as propellants, the vehicle has a 7,000-pound thrust capacity and currently contains no ascent phase in its program.

"There are two flight test aspects," McKinney said. "One is to release it from a B-52 (Stratofortress), to check out approach and landing characteristics. The other involves taking the X-37 as payload on the shuttle. It is designed to fit in the shuttle payload bay. The shuttle will deploy the vehicle into space."

A second option for deploying the X-37 into space using an expendable launch vehicle is being considered. The first of several X-37 flight tests from the B-52 aircraft is scheduled for September 2002. Two orbital missions are planned, one in 2002 and the other in 2003, NASA officials said. During these missions, the X-37 will remain in orbit up to three weeks before re-entering the earth's atmosphere and gliding to a runway landing.