Carl Norman Recovering From Surgery
Good News! As we mentioned in Wednesday's news, Carl Norman went into surgery this morning at 7:30 am and came out by 9:45 am. Now get this: he had a QUINTUPLE bypass! He's resting comfortably in ICU and will be moved to his room tomorrow. When we get his room number, we'll let you know.

Bridge Commander Multiplayer Feature Revealed
Totally Games confirmed today that they are in development on a dynamic multiplayer experience for armchair captains in Star Trek Bridge Commander. Star Trek Bridge Commander will transport gamers to the alpha quadrant where they will exchange salvos of phaser fire as captain of Federation, Cardassian, Klingon and Romulan ships in a battle for supremacy of the sector. Players can each control their own ship from Tactical mode, with all the functions of the bridge at their fingertips. The highly anticipated space combat sim will support four-player Internet play via Gamespy and eight-player LAN battles throughout five challenging multiplayer modes including:

Battlefield 1942 Release Date Bumped
EA has sent us the latest screenshots from Digital Illusions upcoming title Battlefield 1942. Set in WWII players can storm the beaches of Normandy, direct artillery at Kursk, pilot a fighter at Midway, shell an airstrip at Gaudalcanal, and command a tank in Tobruk. Battlefield 1942 is multiplayer-focused with support for up to 64 players, there will be a mode for single player action. Playing as an infantry officer, gamers will be able to operate many weapons of war available to the Axis and Allies as well as command numerous land vehicles, ships and aircraft. With larger craft such as a bomber or battleship, the game will allow players to choose what stations they will serve - pilot, gunner, captain, bombardier, etc. Originally slated to appear in stores in September, the game is now scheduled to debut in Spring 2002. Click here to view screenshots.

The testing demonstrated the C-130J is capable of performing the critically important airdrop mission. Airdrop is the ability of a cargo aircraft to deploy paratroops and supplies from either the airlifter's rear loading ramp or the side paratroop doors from a range of altitudes. Completed tests included parachute-assisted pallet deployment of loads up to 42,000 pounds and paratroop drops from altitudes as high as 25,000 feet.

The C-130J-30's sophisticated navigation system allows the aircrew to achieve highly accurate drops in all weather conditions. The C-130J-30 brings a whole new operational airdrop capability to both the Air Force as operator and the Army as end user. Current analyses show a close formation of 33 C-130J-30s will be able to drop 2,800 troops in less than five minutes.

Although designated a tactical airlifter, the C-130J-30 has demonstrated strategic capabilities with unrefueled non-stop flights of more than 4,000 miles. The C-130J-30 is based on the standard C-130J model, but features a fuselage 180 inches (457.2 centimeters) longer than the standard C-130J model, providing the greater airlift capability required by many operators.

This version is the first stretched C-130J to be equipped with the computer-controlled Enhanced Cargo Handling System, which allows quick conversion from cargo floor tie-downs to rollers for palletized cargo. When compared with the standard model, the J-30 can be used to carry 128 combat troops instead of 92, and 92 paratroops instead of 64. It can also carry eight standard 463L pallets rather than six, 97 medical litters instead of 74, and 24 container delivery system (CDS) bundles instead of 16. Worldwide, 111 C-130Js and J-30s have been ordered. Current customers include the Air National Guard, Air Force Reserve Command, U.S. Coast Guard, U.S. Marine Corps, Royal Air Force, Royal Australian Air Force, Italian Air Force, and the Royal Danish Air Force.

EADS-CASA Begins Eurofighter Typhoon Final Assembly
EADS-CASA Military Aircraft has announced the beginning of the Eurofighter Typhoon Final Assembly Phase at the Spanish Getafe facilities. Two hangars at Getafe have been transformed during the last 16 months. Both infrastructure and production tools have been re-equipped and the hangars have been adapted to handle the technical requirements for this major step. 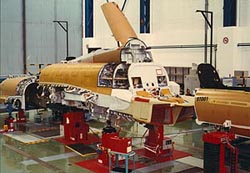 Design and installation of 11 major assembly jig's, in the wings assembly hangar have been completed. Also installed is the latest generation of fuselage alignments and integration systems, operated by optical systems and interferometry.

The commencement of Eurofighter Typhoon Final Assembly in Spain is part of the integrated efforts made by European industry. There are now 4 Assembly lines in operation. The other 3 lines are based in the UK (Warton), Germany (Manching) and Italy (Turin). The Spanish assembly line is targeted to reach a rate of 5.5 right wings per month and up to 7 aircraft per year.

Rolls-Royce will reduce manufacturing lead times by 30 per cent, compared with previous propulsor systems supplied to the Royal Navy. This will be achieved by advanced manufacturing techniques, reducing the need for extensive machining work, and improved project management, including concurrent engineering techniques which fully integrate design, manufacturing and support teams.

Deliveries will begin in June 2003 and be completed by 2006. Performance targets include low noise and shock containment capability.

Saul Lanyado, Rolls-Royce President -- Marine, said: "This is a significant development in our submarine systems capability. It expands our expertise throughout the power train, a strategy we are also pursuing in the commercial marine market. Our expertise will allow us to meet demanding schedules and exacting naval engineering standards at a competitive price, all key elements to this contract win."

Under a 2 billion pounds Prime Contract, BAE SYSTEMS is undertaking, through Prime Contract Offices at Frimley, Surrey, the design, build and initial in-service support of three 7,200 tonne Astute Class Submarines Type SSN for the Royal Navy. The Prime Contract has the potential for further submarines of the Class and includes weapons upgrade of boats in the previous S&T Classes being undertaken by BAE SYSTEMS at Weymouth. 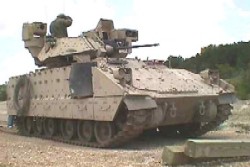 The company will provide wire harnesses, cable assemblies and related interconnect equipment to support these frontline ground vehicle platforms. The assemblies will be able to withstand the adverse effects of chemical warfare environments. Deliveries are expected to commence in May 2002 and continue through April 2005. Additional contracts over the next several years are anticipated, as Army plans indicate that several hundred M2A3 vehicles could be produced through the year 2007. DRS has provided electronic manufacturing services for the M2A3 vehicles under previously awarded contracts since 1997.

The Bradley M2A3 plays a crucial role in dominating the digital battlefield and is one of the most significant programs in the Armys strategy for 21st century modernization, said Mark S. Newman, chairman, president and chief executive officer of DRS Technologies. The award of these additional contracts demonstrates our customers continued confidence in the high-quality services we provide and our long-term, reliable performance as a Bradley Team member. DRS has become recognized as a key defense industry supplier of best value electronic manufacturing services.