Green Berets Has Gone Gold
Take-Two Interactive announced that Green Berets has gone Gold and is expected to be released by the end of July 2001. Green Berets is a squad based tactical game set in the treacherous jungles of Southeast Asia. Powered by the magnificent Myth II engine, the game offers 10 missions through several different types of environments ranging from rice paddies to underground tunnels. Players can use both ground and air units for completing specific mission objectives, which include rescuing POWs, sabotaging communications towers, or finding stranded pilots. Click here for more information.

GameStorm Closes Down
Kesmai has announced that their massively multi-player service GameStorm will be closing down July 30, 2001. All the games available on the GameStorm service, Air Warrior III: Millenium and MultiPlayer BattleTech: 3025, will be moving over to EA.com.

Wreck of HMS Hood Found
An undersea expedition has discovered the wreck of the Royal Navy battle cruiser HMS Hood which sank 60 years ago. The Hood, considered to be the most advanced naval ship in the world when she was built, was sunk in May 1941 by a single shell from the German battleship Bismarck.

The expedition has already relocated the wreck of the Bismarck and beamed colour footage back by satellite to the UK for the first time. The Hood's remains, which include substantial portions of the ship's hull, were found at a depth of 3,000 metres in the Denmark Strait between Greenland and Iceland.

The first pictures of the wreck were broadcast on television in Britain on Monday by Channel 4 News. It was found by a team led by deep-sea explorer David Mearns as part of an expedition funded by Channel 4 with the support of the Ministry of Defence, the Hood Association, the Royal Naval Association and the Royal British Legion.

Mearns said: "Our immediate reaction has been one of surprise by the damage suffered by Hood. "It is far worse than any of us expected."

Channel 4 will transmit a documentary about the search -- called Hunt for Hood - on August 6. [More...]

The first sortie included an in-flight conversion from short-takeoff/vertical landing (STOVL) propulsion mode to conventional-flight mode for the supersonic run, followed by a conversion back to STOVL mode for a "slow" (80-knot) landing. For the second flight, Paines executed another short takeoff, transitioned to wingborne flight, then decelerated to a hover and landed vertically. The flights occurred on July 19. 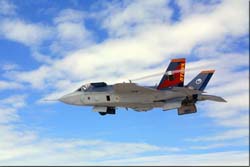 "To go supersonic, hover and land vertically in two back-to-back flights was a fantastic experience and a tremendous privilege for me," said Paines, who in late June made three consecutive vertical takeoffs, hovers and vertical landings in the X-35B. "The JSF concept of a STOVL, supersonic, high-performance, stealthy strike aircraft presents a truly awesome operational capacity."

In the last month, the X-35B has logged a series of vertical takeoffs, short takeoffs, hovers and vertical landings. Its first supersonic flight was on July 9.

The X-35B features a unique propulsion system in which a drive shaft from the Pratt & Whitney JSF119-611 engine turns a counterrotating lift fan that produces cool-air lifting force during STOVL operations. The Rolls-Royce fan, actuated by a clutch that can be engaged at any power setting, works in concert with an articulating rear duct and under-wing lateral-control nozzles to lift the aircraft with nearly 40,000 pounds of vertical force. Because the fan amplifies the engine's power, the engine is able to run cooler and with less strain, increasing reliability and extending service life. The lift fan provides the propulsion system with about 15,000 pounds more thrust than the engine alone could generate in non-afterburning military power conditions. All of the X-35B vertical takeoffs, hovers and landings were accomplished at 2,500 feet elevation, at temperatures up to 94 F.

The BRU-57 Smart Bomb Rack increases the F-16 Falcon's mission effectiveness by doubling the aircraft's smart munitions load carrying capability. EDO believes that a number of the over 4,000 F-16 aircraft produced or on order, many in foreign countries, are candidates for the BRU-57 upgrade.