Eurofighter Typhoon Has Gone Gold
Take-Two Interactive Software, Inc. announced today that Eurofighter Typhoon has gone gold in North America and is expected to ship to retailers by the end of the month. Developed by UK-based Rage Software plc, Eurofighter Typhoon is set in Iceland early in the 21st Century, control and manage six of Europe's best trained pilots through more than 100 possible dynamic flight missions, including ground strike, interception, escort, combat air control and more. Click here to take a look at our previous coverage.

Shogun: Warlord Edition Faces Delays
Electronic Arts has announced that it has been forced to delay the release of Shogun: Total War Warlord Edition, the official expansion to the original Shogun game. The delay is the result of problems with documentation met during the quality assurance process at Electronic Arts. The expansion should be available at the end of August. The game is set in an era in Japanese history when the Mongols repeatedly tried to invade Japan.

F-16 Crash Kills Two
An F-16 chase aircraft crashed at Edwards Air Force Base, Calif., July 17 killing two people. Maj. Aaron George, a pilot with the 416th Flight Test Squadron here, and Judson Brohmer, a subcontractor aerial photographer supporting Lockheed Martin at the time of the incident, were killed. The F-16 Fighting Falcon was conducting photo and safety chase support for a separate F-16's test mission when it crashed at about 7 a.m. nearly 30 miles east of China Lake Naval Air Warfare Center, Calif. A board of officers will investigate the accident.

Two Firsts For Merlin In A Week
The Merlin helicopter reached two significant milestones within a period of four days. A Merlin HM Mark 1 anti-submarine helicopter landed aboard HMS Ark Royal on 14 July, the day after the aircraft carrier returned to sea after a comprehensive refit. And on 17 July, the Merlin HC Mark 3 tactical transport version entered squadron service with the RAF. 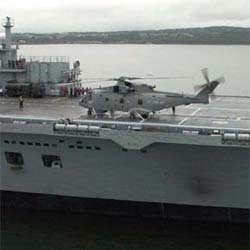 The Merlin HM Mark 1 is the Royal Navy's anti-submarine variant. Equipped with Blue Kestrel radar, the advanced FLASH sonar, and up to four Stingray torpedoes, it is designed for long-range autonomous anti-submarine warfare. The aircraft is undergoing intensive trials with 700M Naval Air Squadron before replacing the Sea King HAS 6. At over 14 tonnes, the Merlin is significantly larger than the Sea King, which is under ten tonnes. The landing on Ark Royal allowed the ship's crew an early opportunity to familiarise themselves with the deck handling techniques needed for such a large helicopter.

The Merlin HC 3 is equipping 28 (Army Co-operation) Squadron based at RAF Benson. The squadron should be declared operational early in 2003, following completion of intensive trials. A total of twenty-two Merlins are being procured for the Royal Air Force. The HC 3 can carry 24 fully-equipped soldiers, or lift several tonnes of underslung cargo. Part of the Joint Helicopter Command, 28 Squadron will one of the key support elements of 16 Air Assault Brigade.

Defence Procurement Minister Lord Bach said, "This aircraft is very advanced and its combination of agility, low noise signature, high reliability and 24-hour a day all-weather capability will enhance our battlefield capabilities significantly. Merlin HC Mark III has been procured under a £750 million programme which is running within budget."

The Missile Defence Systems organisation has major activities in Washington, D.C.; Huntsville, Anaheim and Canoga Park in California, Kent, in Washington State, Wichita in Kansas and Colorado Springs, Colo., allowing it to capitalise on the resources and talent of Boeing personnel that have supported advanced missile defence activities for decades.