Conquest: Frontier Wars Demo
The Conquest demo is available for download! The demo features both skirmish and multiplayer modes. Conquest: Frontier Wars is a 3D real-time strategy game that takes place in solar systems around the galaxy. The game-play is reminiscent of tactical situations faced by the U.S. and Japan in the Pacific theater of World War II - but now those events are played out on the modern battleground of space. Click here to download the demo.

The pre-production Apache Longbow, which flew for 23 minutes, was equipped with numerous system updates that incorporate commercial off-the-shelf technologies to reduce costs and allow for future growth while extending product operational life. The enhancements also will provide a foundation to support the Army's emerging digitized battlefield requirements.

"This first flight is a significant milestone for the program," said Al Winn, vice president for Apache programs. "It not only marks the start of the second multiyear production effort for the U.S. Army for 269 aircraft, but it also drives home our belief that Apache will remain a potent and relevant weapon for our customers for decades to come."

Representatives of Apache team companies from around the world were on hand to witness this first flight.

"We are proud of our role in enhancing the features and capabilities of this superior product," said Martin Soltau, Apache program manager at Smiths Aerospace, United Kingdom. Smiths Aerospace UK produces the improved electrical power management system used in the Apache Longbow.

Next-generation Apache Longbows continue to make their presence known around the globe through a growing customer base that includes Egypt, Israel, Singapore, The Netherlands and the United Kingdom. Several international competitions also are under way.

In addition to the remanufacturing of 269 aircraft, the second multiyear contract includes maintenance and operator training devices, spare parts, logistics and support services.

US Conducts Successful Missile Intercept Test
The controversial programme to develop a missile defence framework to defend the shores of the United States from ballistic missiles, took another positive step late on Saturday when a mock warhead was destroyed under test conditions. Although the Department of Defence (DoD) played down the individual importance of this test, it will be a fillip to the Boeing led team after two of the previous three flight tests ended in failure. 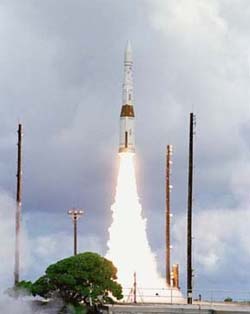 The Air Force launched a Multi-Service Launch System (MSLS) rocket, from Vandenberg Air Force Base, at 7:40 p.m. PDT carrying a suite of targets. Approximately 21 minutes later, A Payload Launch Vehicle (PLV) lifted off from the Kwajalein Missile Range, in the Pacific, carrying an Exo-Atmospheric Kill Vehicle (EKV), which duly intercepted and destroyed the primary target.

The intercept occurred over the Pacific Ocean at approximately 11:10 p.m. EDT. The kill vehicle intercepted and destroyed the target by hitting body-to-body at an altitude of approximately 140 miles and a closing speed in excess of 15,000 miles per hour. The "kill vehicle" selected the target instead of a large, black mylar balloon, the temperature of which matched the mock warhead so as to act as a decoy.

The DoD will not know for some weeks whether all the objectives of the test have been successfully attained. Having confirmed the successful "kill", Air Force Lt. Gen. Ronald Kadish described the test as ''One stop on a journey. '' Although he was quick to praise the team involved in Saturday's success, his thoughts were on the long-term goal. ''It's a series and a buildup of data, '' he said.

The Boeing Company is leading the programme, in association with sub-contracted companies. Both rockets used in the test on Saturday were adapted by Lockheed Martin from their Minuteman range of missiles, while Raytheon provided the Exoatmospheric Kill Vehicle (EKV), the PAVE PAWS Early Warning Radar (EWR) and the Ground Based Radar-Prototype (GBR-P).

Click here to watch Boeing's video of the launch and intercept.

"This intercept is another step toward the ultimate validation of the GMDS system's technology and integration." said Jim Albaugh, president and chief executive officer, Boeing Space and Communications.

Four Greenpeace protesters were arrested after delaying the launch at Vandenberg, as the controversial programme continues to attract criticism over its potential global repercussions.

"As countries race to counter the Bush proposed shield with weapons of mass destruction, the US will be responsible for single-handedly destroying treaties of peace and arms control and creating a proliferation dynamic that will put us all at great risk," Greenpeace said in a statement.

With each flight test costing approximately $100 million, and after the last two tests flopped badly, this was an important success - even if a small one with regard to the long-term development of the layered missile defence framework. "This test was as easy as it gets," said Tom Collina, director of the Union of Concerned Scientists' global security program.

The test came just days after Pentagon officials confirmed that President George W. Bush's missile defence plans would clash with the 1972 ABM Treaty in months rather than years. With the next missile test due in October, the determination to accelerate the programme continues apace.

HMS Ark Royal At Sea After Refit
HMS ARK ROYAL has sailed from Rosyth for trials in the North Sea after an extensive refit. ARK ROYAL arrived at Rosyth in May 1999 and the £47 million pound refit by Babcock Engineering Services included strengthening the flight deck for the new Merlin anti-submarine helicopters and making further alterations to allow the carrier to operate RAF GR7 Harriers. 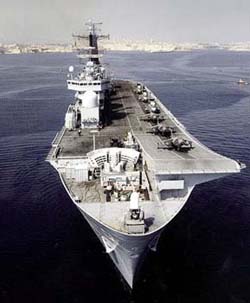 Minister for the Armed Forces, Adam Ingram said "ARK ROYAL has a unique capability and, the refit has greatly enhanced her ability to operate in a joint environment. I look forward to her rejoining the Fleet."

Commanding Officer, Captain David Snelson, who took up his appointment in May this year, said "I am delighted to be in command of such a prestigious carrier, certainly the premier warship in the Royal Navy's fleet. The entire crew is looking forward to being back at sea and testing the ARK's full capabilities over the next three weeks, including trial landings for the new Merlin helicopter whilst off the coast of Scotland."

Thanks to the refit, the ARK is planned to remain in active service until 2015 when the proposed Navy 'super-carriers' will be expected to continue the glorious traditions set by today's ships and the men and women who serve in them. HMS Invincible is expected to arrive at Rosyth later this month, to prepare for a shorter, £50 million refit programme starting in November.

EDO AMRAAM Launcher For F-22
EDO Corp has won a $9.4 million contract for its AMRAAM Vertical Ejection Launcher (AVEL) from Lockheed Martin Aeronautics Co. The contract, which includes $1.4 million for advance material previously authorised by Lockheed, will be produced at EDO's Marine and Aircraft Systems facility in North Amityville, N.Y.

James M. Smith, EDO's chief executive officer, stated, "This award solidifies EDO's position as a supplier of pneumatic-based launching mechanisms for aircraft, which will be in service well into the 21st century. EDO's weapons ejection products are a core component of our growth strategy and are specified systems for a wide array of domestic and international aircraft, including the proposed Joint Strike Fighter (JSF)."

With the need to carry and eject AMRAAM missiles from within concealed weapons bays, Marine and Aircraft Systems, as part of the F-22 Team, developed a new launcher capable of achieving all internal bay armament delivery requirements. The result is the LAU-142/A AVEL which carries and ejects missiles from internal missile bays for safe aircraft separation at mach speeds.

The AVEL employs a highly-reliable, nonpyrotechnic energy system controlled by aircraft electrical and hydraulic power. When commanded for in-flight missile launch, the AVEL system charges, and then safely ejects the missile through the air-flow boundary layer very rapidly.

BVR Systems To Upgrade AMOS Simulator for IAF
BVR Systems (1998) Ltd., a diversified world leader in advanced military training and simulation systems, today announced that it has been awarded a contract valued at approximately NIS 2.5 million (approximately $600,000) to upgrade the AMOS flight simulator for the Israeli Air Force (IAF).

BVRS' AMOS system has been in use as a pilot selection system in the IAF Flight Academy since 1992 and will be upgraded. The system includes a "Tzukit" aircraft flight simulator, flight simulation analysis together with a PC-based statistical package. The state-of-the-art software and hardware upgrade will include an upgrade of the existing cockpit, two new cockpits, an instructor operator station, mission debriefing, and "what if" capabilities. Earlier in the year the Company was awarded a contract for the provision of a Cockpit Procedural Flight Trainer to a foreign defense force valued at approximately $3.7 million.

BVRS President and CEO, Yoel Katzir, said that the AMOS contract is important, because it means that BVRS' simulator will continue to be used for the selection of pilots in one of the most sophisticated air forces in the world. Mr. Katzir added that this contract is another step forward in establishing BVRS as a supplier of simulation, debriefing and training systems to the Israeli Defense Forces.