Moody F-16 Crashes near Sarasota, Florida!
An Air Force F-16C Fighting Falcon assigned to the 69th Fighter Squadron at Moody Air Force Base, Ga. collided with a small civilian aircraft at approximately 4 p.m. EST Nov. 16 near Sarasota, Fla. The aircraft was on an air-to-ground training mission at the time of the incident. The pilot on board the military jet ejected safely. The condition of those on board the civilian aircraft is not known at this time. A board of officers will investigate the accident.

"Wired" Raptor takes to Skies!
Raptor 4004, the first Lockheed Martin-Boeing F-22 to fly with advanced avionics hardware and integrated software, lifts off Nov. 15 on its maiden flight from Marietta, Ga. The application of advanced avionics software in the F-22 is key to the Raptor's revolutionary performance advantage over any other fighter. In the air-to-air arena, the stealthy F-22 will be virtually unseen on radar, while its sophisticated array of sensors and advanced radar will allow it to reach out and strike adversary aircraft undetected from long range. 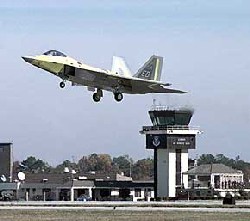 The advanced software package will also enhance the Raptor's ability to deliver precision air-to-surface weapons on target, day or night, in any weather. While Raptor 4004 is fitted with Block 1.2 software, flight demonstration by the end of the year of an even more advanced software package -- Block 3.0 -- is required before the Department of Defense will authorize the Air Force to begin initial production of the F-22. The Air Force and F-22 contractors are currently putting the Raptor prototype through a comprehensive flight-test program at Edwards Air Force Base, Calif. (Courtesy Photo)

Flanker 2.03a Patch Released!
SSI has posted a new 2.03 patch for US and UK versions of Flanker 2.0. This is a comprehensive patch that includes all improvements in both the 2.01 and 2.02 patches, as well as several new improvements, including:

The size of the patch is approximately 21.5MB. The download is available at the: Flanker 2.0 Site

Ever wanted to see what happens behind closed doors of a beta test. A new movie has been released that gives you a sneak peek at what the closed beta tests have been looking like. The movie is available at: WW II Online Movie

Search Concludes; Misawa Pilot Declared Dead!
The formal search and rescue operation launched to find the missing pilot from Nov 13's F-16 mid-air collision over the Sea of Japan was terminated at 10:22 a.m. local Nov. 15. The exhaustive search, which covered hundreds of square miles, involved the Japan Self Defense Forces, the Japan Maritime Safety Agency, the U.S. Navy's Kitty Hawk Battle Group and the U.S. Air Force. Approximately 30 aircraft searched for more than 48 hours and failed to locate the pilot. U.S. and Japanese air and naval forces worked together in a well-coordinated and selfless effort using the latest technologies available.

"Based on the results of the search, the environmental conditions in the area and all available evidence, I have determined the pilot, Capt. Warren B. Sneed, to be lost at sea and deceased," said Brig. Gen. Chip Utterback, 35th Fighter Wing and Misawa Air Base installation commander. "The entire Misawa community feels the loss of Captain Sneed and our thoughts and prayers go out to the Sneed family. Warren died in the defense of his country. His spirit, strength of character and constant smile are legacies that can now be used to bring us all together in this tough time," said Utterback.

MechWarrior 4 Gold!
Microsoft has announced that MechWarrior 4: Vengeance, has gone gold. This means that the game is completed and is expected to hit store shelves in the U.S. by early December. Take command of an awesomely armed, 40-foot tall, 100-ton war machine across the remote battlefields of a hostile world. In addition to a variety of single-player missions, the game features several multiplayer modes as well. For more info go to: Mech Warrior 4: Vengeance

Saitek SGE Patch for DirectX 8.0 Users!
Saitek has found that some people are having problems with the SGE software not installing after they have installed DirectX 8.0. The Saitek software team has a beta version of the new SGE v.2.0 for you to try. For information, and the download go to: Saitek USA

Strategy First to Publish World War II Online!
Strategy First Inc., is pleased to announce that it has entered an agreement with Playnet Inc. to publish the highly anticipated World War II Online throughout North America and selected regions of Europe and Asia. Playnet and Strategy First are eager to set a new trend in the industry by introducing the first truly cross-genre massively multiplayer online game. The game offers players a combination of first person shooter, role-playing and strategy styled game-play in one title. Set in the virtual battlefields of the Second World War, players choose to join the Army, Marines, Navy or Air Force for a variety of countries on both the Allied and Axis sides. Scheduled for release in Summer 2001. For more on WW II Online go to: WW II Online

Search Continues For Missing Pilot!
MISAWA AIR BASE, Japan (AFPN) -- The search and rescue efforts are continuing for a second day to find the missing pilot, Capt. Warren Sneed, whose F-16 Fighting Falcon aircraft collided midair with another F-16 Nov. 13. One person was aboard each aircraft. The pilot of the first aircraft, Col. Michael Lepper, 35th Operations Group commander, returned to Misawa Air Base, Japan, yesterday. He was treated and released from the 35th Fighter Wing hospital in good condition. Both American and Japanese forces are involved in the search to include people assigned to the U.S. Air Force, U.S. Navy the Japanese Self Defense Force. The two Air Force F-16s crashed over the Sea of Japan, while participating in a defensive counter air training mission during the Keen Sword exercise. Both aircraft were assigned to the 14th Fighter Squadron, Misawa AB. A board of officers will investigate the accident. Additional details will be provided as soon as they become available.

B-17 II Goes Gold!
Apparently, Graham Davis with Wayward Design announced yesterday on Bombs-Away.net that, B17 European has Gone Gold. It should be in the shops in Europe on the 24th November. The American version launch date has been brought forward to pre Christmas.

COMBATSIM.COM has confirmed that B-17 II has indeed gone gold for the European market. Our contacts at Hasbro Interactive in North America, however, were somewhat surprised when we tried to confirm the pre-Christmas launch date for North America. According to our source, February 2001 was a more likely release date for this highly anticipated title. Who's right? We will keep checking and get back to you.

Two Misawa Air Base F-16's Crash!
Two Air Force F-16 Fighting Falcon aircraft crashed Nov. 13 over the Sea of Japan. The aircraft, assigned to 35th Fighter Wing, here, were on a routine training mission. One person was aboard each aircraft. One pilot, Col. Michael Lepper, 35th Operations Group commander, has returned to Misawa and is currently in stable condition at the 35th FW hospital. A rescue team is continuing to search for the remaining pilot. A board of officers will investigate the accident. Additional details will be provided as soon as they become available.

Voodoo5 6000 --- Not!
3dfx Interactive® Inc. announced yesterday that it has licensed its 4-way Scanline Interleave (SLI) technology, based on the Voodoo5 6000 AGP project, to Quantum3D. The card design will now fall into Quantum3D's AAlchemy line for workstation graphics.

Licensing our breakthrough 4-way SLI technology to Quantum3D is the best way to expend our engineering resources in a way that offers the best return, said Byran Longmire, vice president of the graphics business unit. While we are sympathetic to the disappointment this may cause to a small number of our loyal gaming consumers, we are looking forward to seeing this incredible technology marketed to the visual simulation industry where visual quality is the most important attribute.

Project IGI Update!
The ProjectIGI.com site has added a new section to their site. The developer, Innerloop, has provided them with 29 artwork pictures, as well as, the Project IGI storyboard. A demo of Project IGI is expected to be available in a couple of weeks. Check the site out at: Project IGI

Mech Commander 2 Website Launched!
Microsoft announced the official online site for its upcoming real-time tactical mech game. The Web site includes the full list of features included in the game, an interview with Mitch Gitelman, the program manager for MechCommander 2; a number of screenshots; and a downloadable video clip showing some in-game footage. MechCommander 2 is scheduled for a spring 2001 release. Visit the site at: Mech Commander 2