Lock On: Modern Air Combat Screenshots
Lock ON: Modern Air Combat combines a broad scope of game play that includes a dynamic battle generator, an immersive combat environment, robust multi-player options, and in-your-face action. Players will feel at home in the cockpit of these world-class fighters and they can easily jump into authentic combat action. Each aircraft is rendered in exceptional detail and performs just like its real world counterpart. Players can choose from eight U.S. and Russian jets that range from tank killing A-10 Warthogs and ground- pounding Su-25 Frogfoots to air superiority fighters like the F-15C Eagle and the Su-27 Flanker. Release Date: Q1, 2002. Click here for screenshots.

IL-2 Sturmovik Screenshots
IL2 Sturmovik provides gamers with a fantastic backdrop for flying - either in the pilot's seat or as a rear gunner (IL-2 plane types only) - in 23 different types of plane, some of which are being simulated for the first time ever. Choose from the what the Soviets referred to as their "black death" or "flying tank," the IL-2 Sturmovik; the high altitude fighter and interceptor, MiG-3, the rear gunner, IL-2M Type-2; P-39s, and Bf-109s. Each aircraft is an accurate model of their respective plane and their flying behavior. Release Date: Q3, 2001. Click here for screenshots.

Destroyer Command Screenshots
Enlist in the US Navy to combat the Axis forces! Players take command of Naval Destroyers, patrolling the Atlantic or Pacific Theaters. Based on actual historical missions from WWII, stalk U-boats, swat Kamikaze planes, escort convoys, blast enemy ships, or pound the beaches in support of infantry landings. Scan the treacherous waters, accessing all of the ship's authentic systems. Engage the enemy with an arsenal of weapons, from torpedoes, 40mm cannons, depth charges or 5 inch guns. Release Date: Q3, 2001. Click here for screenshots.

Rogue Spear: Black Thorn Screenshots
Tom Clancy's Rogue Spear: Black Thorn is a new stand-alone mission pack that will be one of the greatest challenges the RAINBOW team has had to face. The world has seen copycat killers before, but for the first time copycat terrorists are recreating some of the most dangerous terrorist acts that have plagued our past. They may not take place in the same location, but the RAINBOW team will be face-to-face with the same tactical situations that made headlines in the past. The players must discover if the acts are random or if there is a single mastermind controlling this deadly operation. Pay close attention to the details received from intelligence and don't repeat the same mistakes that were made in the past. Click here for screenshots.

Tim Brooks, President of Shrapnel Games, said, "We have experienced delays in getting our next two products into the market. We have contracted with a new vendor for CD duplication. In the long run, we think this is a smart move, as it will allow us to follow our projects much more closely. The changeover however has caused us a short delay. We apologize to our fans for the delays and want them to know that this is only temporary."

The new release dates are:

Fourth NMD Missile Intercept Test Date Fixed
The US Defense Department has announced the date of the next trial of its missile defence system. The Ballistic Missile Defense Organisation (BMDO) will conduct a flight test, which includes the planned intercept of a long-range ballistic missile target on Saturday, July 14, 2001. The flight test launch window is scheduled for 1500-1900 hours GMT. 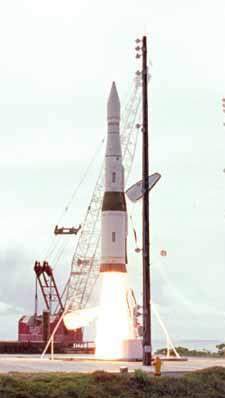 A Multi-Service Launch System (MSLS) will be launched from Vandenberg Air Force Base in California. The MSLS, a modified Minuteman II intercontinental ballistic missile, will carry a mock warhead and a single decoy. About 20 minutes after the MSLS is launched, and about 4,800 miles away, a prototype interceptor missile carrying a prototype exoatmospheric kill vehicle (EKV) will launch from the Missile Test Facility on Kwajalein Atoll in the Pacific. About 10 minutes later the intercept should take place at an altitude of approximately 140 miles above the central Pacific Ocean during the midcourse phase of the target warhead's flight.

This will be an integrated system test, with all representative system elements participating: space-based missile warning sensor, ground-based early warning radar, the prototype X-Band radar at Kwajalein Atoll and the battle management, command, control and communications system located at the Joint National Test Facility in Colorado Springs. Since the system is in its research and development phase, these elements serve as either prototypes or surrogates for system elements which are in the developmental stage and have not yet been produced for actual operational use.

This will be the fourth intercept test of the Midcourse Defence Segment (formerly National Missile Defense) research and development program. The first test resulted in the successful intercept of a ballistic missile target. The second test did not achieve an intercept because of a clogged cooling pipe on the EKV, but did successfully test the integrated system of elements. The third test did not result in an intercept because the EKV failed to separate from the booster rocket.

US DoD Plans B-1 Reduction
Last week, the US Defense Department announced its approval of an Air Force initiative to reduce its B-1 bomber inventory from 93 to 60 aircraft. 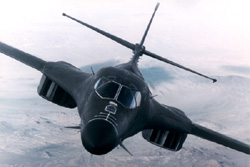 After the reduction, the remaining fleet from Mountain Home Air Force Base in Idaho, Robins AFB in Georgia and McConnell AFB in Kansas will be consolidated at Ellsworth AFB in South Dakota and Dyess AFB in Texas.

The Air Force has established a team led by Lt. Gen. Joseph H. Wehrle Jr., the deputy chief of staff for plans and programmes. Other team members come from Air Force headquarters, Air Combat Command and the Air National Guard. The team plans to visit Air Force installations affected by the B-1 plan.

"The purpose of our trip is to obtain and provide first-hand information about how removal of the B-1 will affect Mountain Home, Robins and McConnell Air Force Bases and their surrounding communities," Wehrle said. "We also need to assess how the consolidation of the remaining B-1s at Ellsworth and Dyess will affect those bases."

The Air Force's B-1 fleet reduction and consolidation efforts will be a phased plan taking much of fiscal 2002 to complete.

Wehrle said the Air Force's top priority is to provide the United States with a more capable B-1 force. Savings incurred from the B-1 reduction and consolidation will be used to modernise the remaining fleet, leading to an increased war-time punch, greater survivability against increasingly more complex air defence systems, higher mission-capable rates, and easier maintainability. (Boeing Photo)