New Global Operations Screens
Crave Entertainment has updated their Global Operations Website with new screenshots featuring the Sri Lanka level from the game. Global Operations is a first-person shooter similar to the incredibly popular Half-Life: Counter-Strike, but it offers a few different features such as fully customizable weapons, allowing players to add different parts to a basic weapon and change them when necessary. The game also features a slightly more realistic physics engine that calculates a bullet's speed depending on the weapon used and whether it makes contact with some sort of surface. In addition, Global Operations lets players select from seven different character types, each of which has unique abilities. Release Date: Q4, 2001 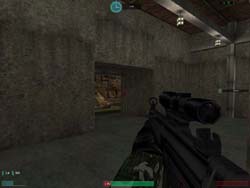 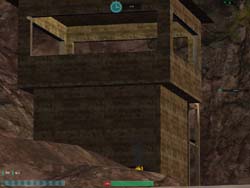 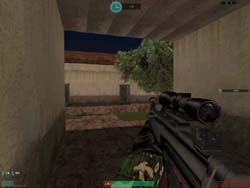 Wolfpack League Reaches 2000 Members
The Wolfpack League has announced the recent unprecedented growth in membership. As of 1 June, 2001, the league has attained the 2000 member mark, making it the world's largest online fleet. This multinational organization, composed of membersfrom twelve different nations, features an English-based website with mirrors in five other languages: German, Spanish, Dutch, Turkish and Swedish. The members of the Wolfpack League, as well as those of the subsidiary Eagle League, are currently organizing online play groups in anticipation of the release of Silent Hunter 2 and Destroyer Command on 21 August, 2001.

F4: Balkan 'Powderkeg' Theater Released
The F4Terrain Team has announced the release of the first completely new theater for Microprose's Falcon 4.0, the "Balkan 'Powderkeg' Theater". The new theater is set in current day in one of the world's most well known 'hot spots'. The aircraft, weaponry, air defenses, and terrain are modeled as accurately as non-classified information will allow. We have included a number of innovations such as new naval ops, new ATC calls, and many new 3D models.

The theater is completely compatible with F4Patch v4.0 and later, and in fact, implements the first true 'one click' theater switching. All the new voices, 3D models, terrain, and even the campaigns are automatically switched with one click in F4patch. The new theater includes all the new F4Patch plug-ins required for theater switching.

The Balkan 'Powderkeg' Theater includes the first two of three new dynamic campaigns set in the new theater, "Operation: Balance of Power" and "Operation: Under Siege". Both campaigns are still underdevelopment and should be considered beta releases. The campaigns are functional with additional ground forces to be added and many of the campaign 'triggers' to be adjusted. The Balkan Theater team would like feedback on the theaters with all Falcon pilots to be reminded that they are still in the development stage. Click here to download.

US Draws EP-3 Saga To A Close
The disassembled US EP-3 spy plane returns home three months after it was forced to make an emergency landing on Hainan Island after colliding with a Chinese F-8 fighter. The pieces of the crippled aircraft arrived Thursday at a military air base outside Atlanta aboard a Russian-built Antonov-124 cargo jet. 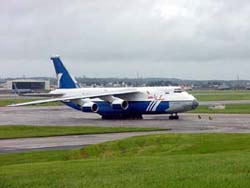 The crash, which occurred on April 1 and resulted in the death of the Chinese pilot, caused considerable diplomatic ructions between China and George W. Bush's fledgling administration with each side foisting responsibility for the incident onto the other. In a stand-off that lasted 11 days, China refused to release the crew of the EP-3 until it received an apology from the White House. Furthermore, the US was denied its request to repair the plane and fly it home, resulting in this costly mission of disassembly and transportation.

A 12-person recovery team from Lockheed Martin set about disassembling the plane on 13 June in an operation costing around $5.8 million. Engineers from the company will now examine the plane to see if it can be repaired to a high enough standard to enable it to return to service in a fact gathering capacity.

"Unless there is an unpleasant surprise waiting for the more detailed inspections, the intention would be to repair it and to return it to service, " said Department of Defence spokesman, Rear Admiral Craig Quigley.

However, the US Navy has set aside $45 million dollars for the conversion of a P-3 Orion maritime patrol plane, should the EP-3 be deemed to be irreparable.

The damage to diplomatic relations between the two countries is also under review, as the US seems to be in no hurry to restore military-to-military relations to their normal state. Defence Secretary Donald Rumsfeld is unlikely to forget the forced apology or that the Chinese Government took the view that allowing the EP-3 to fly out of China would be construed by their people as an unacceptable climb-down. However, the State Department was at pains not to worsen the situation.

"We do seek a productive relationship with China, " said spokesman Richard Boucher. "We don't see China as an enemy. We don't think China should see us as one."

At any rate, the White House will be glad to draw a line under what has been a costly affair in actual currency and in goodwill between the US and China. (US Air Force Photo) 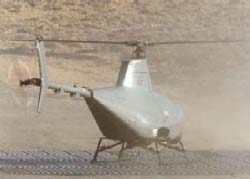 Dubbed P-3, the vehicle will include a dual-redundant avionics system similar to the one designed for the production Fire Scout system. Joining a manned VTUAV system in the company-funded, two-vehicle test fleet, P-3 will begin flight tests at the end of the year. The first engineering and manufacturing development (EMD) vehicle, E-1, is expected to be delivered in July, while the EMD flight test programme is scheduled to begin in February 2002.

Currently in low-rate initial production (LRIP), the Fire Scout system will provide reconnaissance, situational awareness and precision targeting support for the US Navy and forces ashore. The system is designed to autonomously take-off from and land on any aviation-capable ship. It will provide continuous operations with a vehicle endurance of more than six hours and provide coverage 110 nautical miles from its launch site using a baseline payload that includes electro-optical/infrared sensors and a laser designator.

The first LRIP system will be deployed by the US Marine Corps and will include three air vehicles, two ground control stations, a data link suite, remote data terminals and modular mission payloads.

General Dynamics Gets US Marine Vehicle Contract
General Dynamics Amphibious Systems has been awarded a $712,026,417 contract for the systems development and demonstration (SDD) phase of the Advanced Amphibious Assault Vehicle (AAAV). The SDD phase replaces the engineering and manufacturing development (EMD) phase. 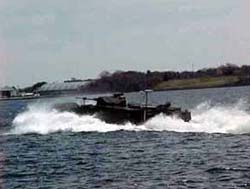 The AAAV, an armoured, fully tracked amphibious combat vehicle, will be the Marine Corps primary means of surface power projection and, if necessary, forcible entry against any level of defended coastline. It is a self-deploying, high-water-speed, armoured amphibious vehicle capable of transporting Marines from ships located beyond the horizon (approximately 25 nautical miles) to inland objectives.

AAAV will be operated and maintained by a crew of three Marines and have a troop capacity of 17 Marines including their individual combat equipment.

Under this procurement, two different types of vehicles will be developed and demonstrated, the Personnel variant (AAAV(P)) and the Command and Control variant (AAAV(C)).

The AAAV is a replacement system for the current AAV7A1 that was fielded in 1972, underwent a major service life extension programme and product improvement programme from 1983 to 1993 and will be over 30 years old when the AAAV is fielded.

The AAAV's capabilities will include:

Development will continue into full rate production leading to the initial operational capability (the first complete AAAV company) for the Fleet Marine Forces in fiscal year 2006. The 1,013 AAAVs will be fielded to Marine units as production rates allow through the years 2007-2016. AAAV production will conclude with Full Operational Capability in 2016.

Super Hornets Ready To Soar
The first F/A-18E Super Hornet squadron, Strike Fighter Squadron (VFA) 115 at Naval Air Station Lemoore in California, has been declared "safe for flight certification" following a series of inspections and review of programmes designed to satisfy Navy requirements for the aircraft.

The squadron, nicknamed the "Eagles," is set to train independently in preparation for its first deployment of Super Hornets with the USS Abraham Lincoln (CVN 72) Battle Group and Carrier Air Wing (CVW) 14 next summer.

Prior to certification, VFA-115 trained jointly with VFA- 122, the Super Hornet fleet replacement squadron at NAS Lemoore, to prepare pilots and maintenance crews for the arrival of the Navy's new Super Hornet aircraft. As new jets were received by the Navy, individual training was conducted on an "asset available" basis. Now, with six aircraft, a full compliment of pilots and a complete administrative structure, the squadron is capable of operating autonomously.

The Super Hornet is a multi-mission aircraft that can be employed as a fighter, a bomber or a tanker. The new jet has a tactical mission spectrum that spans from long range, sea-based air dominance to deep-strike interdiction. It is designed to carry every tactical air-to- air and air-to-ground weapon in the Navy's inventory, and is equipped with an enhanced radar system, as well as advanced on-board sensor fusion capability.

The Super Hornet is expected to replace the F-14 Tomcat in future programme years.

This was the public debut of the gun pod, which can be mounted on virtually all modern fighter/attack aircraft that meet the fuselage or wing-mount requirements.

The Advanced 27mm Cannon is the same weapon selected by both candidate prime contractors for the JSF aircraft being developed and the Eurofighter 2000 Typhoon now in production.

The gas operated 27mm cannon fires at a rate of 1,800 rounds per minute. A blast bottle is incorporated in the system for gun gas management and reduced signature. The revolver breech provides reliability and reduced parts costs for greater affordability and reduced maintenance.

The ammunition feed system for the pod uses a cost-effective, highly reliable linear linkless design. The system features high-density, compact ammunition storage, including restoring spent cases to the magazine. The pod can be reloaded in less than five minutes.

The pod is hard-mounted to the aircraft using a specially designed hardback adaptor, providing firing-point accuracy and repeatability. Its design allows the cannon to be positioned within the pod for air-to-air or air-to-ground operations by cockpit selected positioning to + 1 degree elevation or -3 degree depression of the gun firing line. Designed for subsonic or supersonic flight, the gun pod is equipped with pylon adapters that provide rigid mounting and firing accuracy. The pod features easy accessibility to the cannon for loading and maintenance and can be installed on the aircraft in less than 10 minutes.