Counter-Strike V1.0 Released!
Counter-Strike, the multiplayer mod for Half-Life, has reached version 1.0. The game has been in beta for over a year. Counter-Strike 1.0 is now available as a mod for owners of Half-Life and as an update for existing players of Counter-Strike. Counter-Strike has gone gold and should be showing up at your local software store in the next few days. For more information and to get the download go to: Counter-Strike

Happy 225th Birthday Marines!
The message for the 225th Marine Corps Birthday is now available at the Commandant's webpage US Marine Corps

DirectX 8.0 Upgrade Available!
Microsoft Corp. announced the release of the final version of Microsoft® DirectX® 8.0. This is the latest in the software company's yearly enhancements to the DirectX API, which standardizes the way that hardware and applications work with Windows. DirectX 8.0 offers a number of advanced features for PC graphics, networking, and audio. Some upcoming games and products rely on DirectX 8.0, including Microsoft's own MechWarrior 4, which will be available later this month. You can download DirectX 8.0 directly at: DirectX 8.0 Download

The Outforce Demo Available!
Strategy First Inc. and PAN Interactive are pleased to announce the release of a second demo for their real-time space strategy game, The Outforce. The Outforce, a futuristic real-time strategy game is set in the 25th century in the far reaches of outer space. The demo is aimed to give players a better idea of what the game will look like and how it will play. Consisting of one mission and multiple levels of difficulty, the demo will also include many of the game's units, animations and in-game screenshots. For more info and the demo visit: The Outforce

Delta Force: Land Warrior Arrives in Stores!
NovaLogic today announced the arrival of Delta Force: Land Warrior in retail stores throughout North America. Land Warrior is the third in the company's series of action games based on the elite anti-terrorist unit known as Delta Force. The new game brings with it an arsenal of improvements, including an all-new 3D graphics engine, a squad of characters with their own military specialties, and enhanced realism. Delta Force: Land Warrior also introduces online gamers to NovaWorld® 2, the next generation of NovaLogic's large-scale Internet multi-player service. For more info go to: Novalogic

Italy 2000 Airport Demo Available!
LAGO's just uploaded the Italy2000 Airport scenery demo. This demo features the Rome Fumicino airport with the Active Scenery that puts the static and dynamic planes on the airport. This demo is not limited in any way. The full version will feature all the airports of Italy in similar detail. The manual is currently being translated and is expected to be ready for a release next week, the boxed release will follow soon after that. The demo is about 2.6 MB, click here to download now: Italy2000 Airport Demo Webmasters are free to copy the files to their own libraries. For more info go to: FS Traffic Site

We intend to make this series the most in-depth and detailed set of enhancements ever made for this excellent WWII naval surface warfare simulator! We are working on getting permission to add more navies and graphics with future updates. Presently over 100+ hours of research and testing have been put into this project. Over 250+ data corrections and enhancements have been applied to the present files included with this update. This is just the start of this ongoing project so keep watch for more updates very soon.

New Matrox Drivers!
Matrox has released new drivers for their G4XX cards that enable some "pretty funky" new DualHead features. Please check the Read Me's for details on all the changes in this driver revision. Further details available at: Matrox

US Air Force flies Lockheed Martin X-35A JSF
The United States Air Force has flown its first evaluation of the Lockheed Martin Joint Strike Fighter (JSF) X-35A as the supersonic stealth aircraft logged its fifth flight. USAF Lt. Col. Paul Smith took off from Edwards Air Force Base and flew a series of manoeuvres, including afterburner operation, designed to evaluate the aircraft's basic handling characteristics. During the 36-minute flight, Smith reached an altitude of 10,000 feet and a maximum speed of 360 knots. Read the full report at: Defence Data

Fighting Steel Project (FSP) V1.0 Due Out This Week!
Warship Database Project has announced the upcoming Fighting Steel Project (FSP) V1.0 is due out this week! Hold onto your seats as one of the best WWII naval combat games gets a big tweak across the bow! The NWS team has to date spent 70+ hours of painstaking research, testing, and fine tuning of the data for this excellent simulation. Almost 50 changes in ship data, 40+ changes in the gun data, and corrections to important torpedo data have been completed! Also included in the FSP pack will be approx. 50 scenarios; all the original canned FS scenarios, modified to be compatible with FSP, are included, along with a selection of the best scenarios collected from various WWW sites, also modified to be compatible with the FSP! For more info got to: Naval Warfare Site 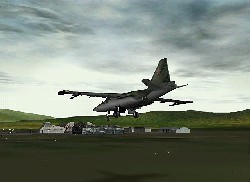 Typhoon in the eye of the storm.


Naval Warfare Simulations News!
Due to feedback and heavy beta testing a re-release of the Fleet Command Mega-Patch V1.3 has been posted on the Naval Warfare Simulations Website. This latest update was designed to add some more corrections and enhancements to the original release of the FC V1.3 patch. The number of fixes and/or enhancements now number over 90. A newly updated Beta WDP V10.9 has also been posted with over 500 new changes that are based on the updated FC V1.3 patch. The WDP FAQ has also been updated with several new topics concerning these updates. All foreign versions of the FC V1.3 patch have also been posted.

The team is now proceeding with WDP V11, which will include more new 3d graphics and weapons systems. WDP V11 should be ready within the next 1-2 weeks. The 3d graphics presently on the docket to be designed include the B-2 Spirit, Eurocopter Tiger, Eurofighter Typhoon, and Mirage 2000. The Fighting Steel Project V1.0 (FSP V1.0) will also be posted this week with a lot of various fixes and enhancements to the original game data. For more information click here: Naval Warfare

Abacus Officially Releases Corporate Pilot Tomorrow!
This add-on for FS2000 includes 6 sleek aircraft used by the business community. "When you see these aircraft, we believe that FS2000 aviators will find them all first class".

As part of Corporate Pilot, well known simmer Al Pelletier has prepared a complete set of Round Robbins. These are point to point to point flights that are typically flown in the business world. To add even more realism, the folks at JDT have added an extensive demo of Radar Contact that gives air traffic control voices to all of Al's Round Robbin adventures. For more information about Corporate Pilot visit: Abacus

Combat Squadron To Be Released Next Week!
Ababus has also announced that next week Combat Squadron will be released. This new package is a collection of 18 famous planes from the World War II Pacific era. These planes are also brought to you by Terry Hill for CFS2, CFS and FS2000.