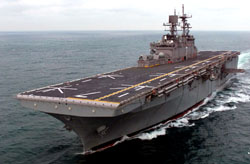 The 40,500-ton LHD 7, second in size only to the Navy's aircraft carriers, is designed to lay off a troubled area of the world and insert its 2,000-member Marine Expeditionary Unit ashore by helicopters and 40 m.p.h. hover craft. As the centerpiece of an amphibious ready group, an LHD is fully capable of amphibious assault, advance force and special purpose operations, as well as noncombatant evacuation and other humanitarian missions.

As the seventh LHD to be completed by Ingalls, LHD 7 reports for U.S. Atlantic Fleet duty and will be homeported in Norfolk, Va., as an element of Amphibious Group TWO. Capt. John T. Nawrocki, USN, a native of Ambridge, Pa., and a 1975 graduate of the U.S. Naval Academy, is USS IWO JIMA's commissioning commanding officer.

LHD 7 becomes the second U.S. Navy warship named to honor the enduring legacy of those who fought and dedicated their lives to the U.S. in the February 1945 Battle of Iwo Jima. The first ship named for the battle, LPH 2, was the lead ship of the LPH class of amphibious assault ships, built in the 1960's as the first "keel-up" amphibious assault ship, and decommissioned in January 1993.

The LHD Class is the sixth amphibious assault ship program in which Ingalls Shipbuilding has been involved since the early 1950's. Most recently, prior to Ingalls' work in the LHD program, the five ships of the TARAWA (LHA 1) Class were delivered to the Navy by Ingalls between 1976 and 1980.

JSF X-32B Completes First Hover
The Boeing Joint Strike Fighter short-takeoff-and-vertical-landing (STOVL) aircraft, the X-32B, yesterday accomplished a major aerospace milestone and another JSF program first when it transitioned from wingborne flight to a hover. During the aircraft's 44th flight, Dennis O'Donoghue, Boeing lead STOVL test pilot, transitioned from fully wingborne (conventional) to jetborne (STOVL) flight mode and then smoothly decelerated the X-32B to a steady hover 200 feet above the ground. The ex-Harrier pilot then accelerated out of the hover and transitioned back to conventional flight before making a "slow landing." 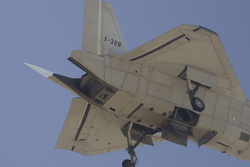 During the flow-switch transition, the X-32B's two-dimensional cruise nozzle is closed, re-directing the engine thrust to its lift nozzles located on the center fuselage. During four other flights the same day, the X-32B completed three additional hovers and numerous transitions to STOVL flight, demonstrating the aircraft's robustness as well as the reliability of the Boeing direct lift system. In total, the airplane hovered for eight minutes yesterday, the single longest sustained hover covering two minutes and 42 seconds.

"The plane was extremely stable during hover," O'Donoghue said. "I was very impressed with the X-32B's controllability, responsiveness and the ease of moving into and out of the hover." He added that the first hover was a significant milestone in preparation for the first vertical landing. "During hover testing, we establish the flying qualities and hover performance of the vehicle -- a necessary step before proceeding to vertical landing."

"The other important aspect of this milestone is the fact that our direct-lift system has demonstrated such a high degree of simplicity and reliability that the transitions from conventional to STOVL mode and back again have really become routine. For the pilot the transitions are effortless, which is definitely what you look for in a STOVL fighter."

Boeing has now completed more than 50 percent of the X-32B's scheduled flight-test requirements since the aircraft's first flight in March. Leading up to the first hover, the X-32B flew as many as five times in one day, demonstrating in-flight transitions as well as slow landings down to 60 knots. The plane is expected to soon complete its first vertical landing.