New GeForce 3 Screens
NVIDIA has released new Giants GeForce 3 screenshots, showing off some of the enhancements the card offers current generation 3D games. Giants has been enhanced for the GeForce3, with performance improvements, DirectX 8.0 support, higher resolution textures, increased polygon counts for the characters, support for vertex and pixel shaders, the Meccs are now bumpy and shiny, the terrain bump map calculations were moved from the CPU to the GPU, character shadows now have soft edges , the sky is reflected in water, there is a smoother transition from water edge to terrain, and there are new weather effects. Click here for more on the GeForce 3. 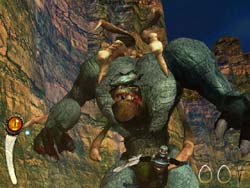 Space Empire IV Patch Released
Shrapnel Games announced today that they have released a new patch for the intergalactic space conquest game Space Empires: IV. Included in the patch are fixes for lingering bugs and adding new line options to aid in the use of the new Play By Web service. Click here to download the patch.

Taiwan Live-Fire Destroys TBM
The Republic of China (ROC) Army destroyed a tactical ballistic missile (TBM) target and a cruise missile target during the first live firings of its Patriot Air and Missile Defense System today at the Chiu Peng Test Range in the southern region of Taiwan. 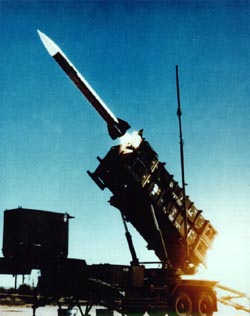 The tests of the Patriot Advanced Capability Phase 2 (PAC-2) missile system were conducted in two missions under operationally realistic and stressing conditions from multiple launchers. The first mission was conducted against a TBM surrogate target and the second against an MPQ 107 target drone that simulated a cruise missile. According to ROC General Headquarters, both missiles destroyed their intended targets.

The entire event was organized, managed and operated by ROC Army forces. This was the first time Patriot has been fired in Southeast Asia, and the first operational test of Patriot against a TBM target outside the U.S.

The tests demonstrated the ROC Army's operational readiness with Patriot against a range of threats from TBMs to cruise missiles. According to preliminary data, the missions were 100 percent successful with no anomalies. A detailed analysis of the flight test data is under way.

The objective of the mission was to evaluate the effectiveness of the training conducted for the ROC Patriot personnel and to validate the air defense capability of the ROC Army. During both tests, the Patriot Fire Units were manned and operated by ROC Army soldiers assigned to operational ROC Patriot Fire Units. After the first test, the unit changed crews, re-configured the system and destroyed the second target, all within 20 minutes.

"These firings confirm both the readiness of the ROC Army's Patriot Units as well as the system's performance during these challenging missions," said Bill Swanson, Raytheon Executive Vice President and President of Raytheon Electronic Systems. "This important mission validates the Patriot as a key component of the ROC's national defense system."

The contract between the ROC and Raytheon for the PAC-2 air and missile defense system was initiated in 1994 under a direct commercial sale agreement. According to the ROC, its Patriot Unit was initially fielded in 1996, and became operational in 1998.

50 F-16s Planned for Israel
The Government of Israel has reached an understanding with Lockheed Martin Aeronautics Company to purchase more than 50 additional F-16 aircraft. The aircraft are being purchased in a follow-on order to the 50 ordered by Israel in 1999 and will be produced in the same advanced, two-seat F-16 I configuration. 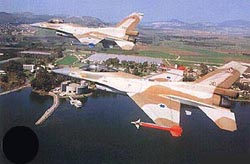 Deliveries will be in 2006, following completion of the 50 aircraft that were already on order, and will be completed in 2009. Total value of this follow-on purchase is approximately $2 billion with Lockheed Martin portion approximately $1.3 billion.

The aircraft will include a number of systems produced by Israeli industry and will be powered by the Pratt & Whitney F100-PW-229 engine. Final assembly will occur at Lockheed Martin's Fort Worth, Texas, facility.

The Israeli Ministry of Defense and Lockheed Martin reached an agreement in principle for the sale today at the Paris Air Show at Le Bourget airport in France. Formal governmental agreements will be completed later.

"This order is another significant development that continues the long heritage of cooperative program between the Government of Israel and Lockheed Martin Corporation. It reinforces the significant defense capability provided by Israel's Air Force, which relies on the F-16 as the backbone of its fighter aircraft fleet," said Amos Yaron, Director General of the Israeli Ministry of Defense. "We are honored that Israel has again selected the F-16 to continue the modernization of its air force. This is another strong endorsement of the F-16 as the world's most capable and sought-after combat aircraft," said Dain M. Hancock, President of Lockheed Martin Aeronautics Company.

Israel has the world's largest F-16 fleet outside the United States Air Force. The country has received or ordered more than 300 F-16 aircraft, including 102 new ones ordered since 1999 and 50 earlier model F-16s that were acquired from the U.S. inventory in the mid-1990s.

Possible F-16 Sale To Hungary
The Pentagon has announced that it has notified Congress of a possible sale to Hungary of four F-16 fighters as part of a deal to lease Hungary 24 of the aircraft. The value of the sale was quoted at $370m.

The four F-16s would be utilised for spare parts needed to refurbish the 24 mothballed F-16s that have been offered on lease to Hungary. The total package will also includes parts, support equipment and training.

A competing bid from Sweden, is under consideration by Hungary, to lease it 24 used Gripen fighters.

The fighters are intended to be used as replacements for Hungary's fleet of MiG-29 aircraft in order to obtain NATO interoperability.

LIZARD is an advanced new generation laser-guided bomb used for air-to-surface attacks of a variety of targets that are illuminated by a laser designator. The LIZARD system features high accuracy; all digital electronics; and compatibility with a broad range of airborne and ground laser designators. The LIZARD modular design provides growth for Global Positioning System (GPS) guidance capability in adverse weather scenario and an alternative Autonomous Imaging InfraRed seeker for attack of a variety of mobile targets.

The systems to be supplied to the Italian Air Force use a 500-pound MK-82 warhead, allowing multiple carriages on board the aircraft of enhanced MK-82 bombs by the LIZARD's pinpoint accuracy. Several Italian Companies will be involved in the production and logistics support services for the Italian Air Force.

Elbit Systems' LIZARD systems have been provided to several countries worldwide and are in operational service.