In this special report, BusinessWeek selected the Info Tech 100 companies based on quantitative criteria including annual revenues, revenue growth, return on equity, shareholder return and profits. In the section entitled Little Niches That Could, the staff of BusinessWeek wrote: When the niche champs size up potential new markets, they look for conditions that play to their strengths. Once Nvidia had mastered the art of creating graphics chips for PCs, it built on the same core technology to create chips for the laptop and workstation markets. Then the company expanded into making graphics chips for video-game consoles, scoring a contract for Microsoft Corp.'s upcoming Xbox.

Global Hawk In Low-Rate Initial Production
Northrop Grumman Corporation's Integrated Systems Sector (ISS) has received $20.5 million from the US Air Force for advanced procurement of long-lead parts for the start of low-rate initial production of two Global Hawk unmanned aerial vehicles and one mission control element. Work under this contract will begin immediately and conclude in March 2003. 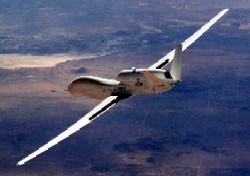 The Global Hawk programme is currently in engineering and manufacturing development following the successful completion of the Milestone II phase of the programme in February 2001. On June 7, Global Hawk returned from a successful six-week deployment to Australia, where it demonstrated maritime surveillance capabilities in a series of exercises with the Australian government. 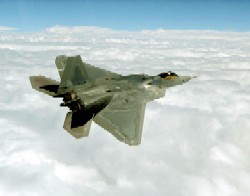 The CNI software, which accounts for 24 percent of the total air vehicle systems software, was developed by a TRW team and its engineers over a six-year period and is critical in the operation of the CNI avionics aboard the F-22 aircraft.

According to Jim Byloff, TRW F-22 programme manager, "TRW's software development team did an outstanding job of meeting the programme delivery commitment to our customer. The final software release is currently being integrated with the core avionics software prior to final installation on the test aircraft, which is scheduled for later this year."

Integrated avionics, a crucial element in the stealthy fighter's performance, is a sophisticated array of sensors, navigation aids and communications systems that will greatly reduce pilot workload while providing an added measure of safety during combat missions. F-22 pilots will be able to automatically acquire fly-to points, link sensor information with their wingmen, identify other aircraft and deploy countermeasures.

The integrated avionics systems include advanced integrated diagnostics capabilities that will detect failures and automatically reconfigure the systems to maintain critical mission capabilities. "TRW is also involved in the next generation of improvements to the CNI system," said Byloff. "We are working on a programme called the Digital Roadmap that implements a technology enhancement to the integrated CNI design, resulting in a substantial reduction in cost while improving reliability and performance over the entire system. TRW is committed to providing the best value in our products." 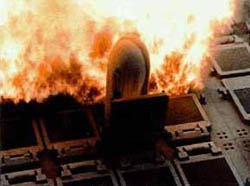 The New ASROC is being developed by MHI under a contract with Japan's Technical Research and Development Institute (TRDI) of the Japan Defense Agency (JDA). The new contract covers the first two phases of a multi-phase contract, which will be completed over a four-year period.

The New ASROC is a vertically launched anti-submarine rocket that, once over the target, converts into a target-seeking torpedo. Under terms of the contract, NE&SS - Marine Systems will provide design expertise to MHI's New ASROC design team to ensure smooth integration with the MK 41 VLS. The test phase of this programme will be conducted in Japan. After programme completion, the New ASROC missile may be installed in Japan's destroyers, which are outfitted with the MK 41 VLS.

Dale Bennett, Vice President and General Manager of NE&SS - Marine Systems said, "This is a significant opportunity for both Lockheed Martin and MHI. This contract marks the first time that Lockheed Martin has performed a 100% foreign (non-US Navy) missile integration into the MK 41 VLS, as well as the first totally direct commercial sale contract for a missile integration effort."