Scenery Apprentice is perfect tool if you'd like to: 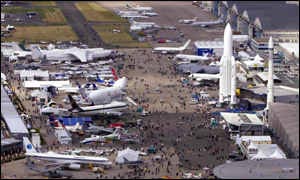 The biannual Paris Air Show took place this past weekend at the Le Bourget airport. As is traditional, it provides companies the chance to boast about orders, lambast each others planes, show off the latest designs and sell a few weapons systems. Click here for photos of the aircraft on display and the full story from the BBC. 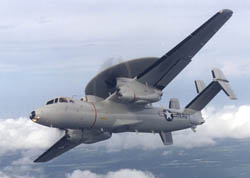 "I'm very proud of our response to our customer -- products delivered on or ahead of schedule, at or below cost -- and that's both new production and modified, overhauled and upgraded aircraft," said Philip A. Teel, sector vice president, ISS Airborne Early Warning and Electronic Warfare (AEW&EW) Systems business area. "The production expertise and experience in St. Augustine, Fla., backed up by our top team in Bethpage, has and continues to achieve much. What better way to end the Group II Hawkeye production line and transition to the Hawkeye 2000."

The company has manufactured 36 new Group II E-2C Hawkeyes for the Navy and two for France, which will receive its third Group II procured under the Hawkeye 2000 multiyear program to keep its inventory consistent.

The first of the next-generation Hawkeye 2000's will be delivered to the U.S. Navy in October 2001. While the two configurations share the same radar, the Hawkeye 2000 boosts its command and control and network-centric warfare capabilities with a powerful new commercial off-the-shelf mission computer, new Advanced Control Indication Set workstations, integrated satellite communications, the new Cooperative Engagement Capability and other enhancements. The Navy has contracted to buy 21 Hawkeye 2000's under a multiyear procurement contract.

The company is also involved in advanced development of the follow-on to the Hawkeye 2000. The Advanced Hawkeye design features an all-new radar with a hybrid, electronically scanned array antenna that delivers the twin benefits of 360-degree coverage and enhanced target detection and tracking capabilities in high-clutter environments. Advanced development hardware has already been built and tested and a test aircraft is being modified to flight test the system. With other enhancements planned, the Advance Hawkeye will not only deliver significant improvements in its AEW&EW capability, but also add new ones to support theater missile defense operations.

Final RAF Squadrons Leave Germany
A formal ceremony marking the closure of RAF Bruggen took place on 15 June 2001. The event, which also marked the RAF's final withdrawal from Germany, included a military parade and a flypast by the two remaining Tornado squadrons. In the presence of British and German VIPs, a Fahnenbander (the German equivalent of a battle honour) was awarded to RAF Bruggen and each of the squadrons that have served there in recent years.

UK Minister for the Armed forces, Adam Ingram, said "The presence of the RAF in Germany for almost 50 years has made a valuable contribution to the peace and stability of Europe. I am confident that, as the British Army assumes responsibility for Bruggen from the RAF, British Service personnel will continue to benefit from the close relations with the local community which we have enjoyed to date"

The RAF will maintain a small presence in Germany until spring 2002, but the ceremony has been planned to coincide with the return of the last two Tornado GR1/4 squadrons to the UK later this summer. Following their departure, the airfield at RAF Bruggen will close in October, but a British presence will continue with units of the British Army moving to Bruggen.

The decision to close RAF Bruggen is the final part of a series of moves to return all RAF aircraft back to the UK following the restructuring of British forces after the end of the Cold War. 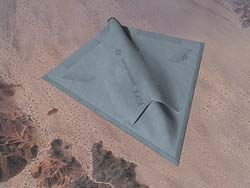 Designed with stealth features and shaped like a kite, Pegasus is constructed largely with composite materials. The aircraft measures 27.9 feet long and has a nearly equal wingspan of 27.8 feet. One of the first tasks of the Pegasus flight program will be to demonstrate acceptable aerodynamic flying qualities suitable for operations from an aircraft carrier. First flight is planned for the fourth quarter of this year at the Naval Weapons Center, China Lake, Calif.

Northrop Grumman is performing trade studies, analysis and preliminary design for a UCAV-N under a $12 million contract with DARPA and the U.S. Navy. The goal of the joint DARPA/Navy project is to demonstrate the technical feasibility for a UCAV system to effectively and affordably conduct sea-based 21st century surveillance, suppression of enemy air defenses, and strike missions within the emerging global command and control architecture.

The UCAV-N is envisioned as a ship-based, "first day of the war" force multiplier that will complement manned systems by building and maintaining a common operational picture; providing targeting for other weapons and weapon systems; taking lethal action against designated fixed or moving targets; and collecting and disseminating post-strike information. Northrop Grumman's ISS unveiled its design for a company-funded unmanned air vehicle (UAV) in February called Pegasus that will fly later this year to demonstrate emerging technologies emanating from its new Advanced Systems Development Center in El Segundo, Calif. The Pegasus UAV is scheduled for completion this summer. 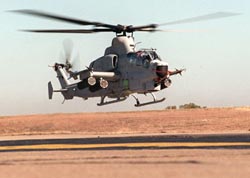 "Using its Longbow heritage, the Cobra Radar System is designed to achieve high performance at low cost," added Gene Thompson, vice president of the Longbow International joint venture at Northrop Grumman. "The system automatically searches, detects, classifies, and prioritizes multiple moving and stationary targets on land and in the air while operating in adverse weather and battlefield obscurants."

Target location is immediately available to the Target Sight System or for transmission to other aircraft or command and control centers and for fire-and-forget engagement with the AGM-114L RF Hellfire missile. The Cobra Radar System automatic rapid search capability significantly adds to the operator's situational awareness.

The Cobra Radar System is also capable against littoral targets that are detected and then displayed on the map display where they are passed to the Target Sight System for transfer to other platforms or engagement with the Hellfire II missile armed with a blast fragmentation warhead.

US Congress Advised Of Plan To Sell F-16s To Chile
The US Defense Department has formally advised the US Congress of it plan to sell 10 F-16 fighter planes to Chile in a deal worth more than $700 million. In its formal notice the Pentagon stated that the F-16s would not upset the basic military balance in the region.

The sale as detailed is also to include two KC-135 tanker aircraft capable of refueling the jets in midair, as well as conventional rocket- launching platforms and navigation systems.

As the contract stands the F-16s will not be equipped with advanced medium- range air-to-air missiles.

Part of the justification for the inclusion of the tanker aircraft is that Chile extends for more than 2,485 miles and in order to make the aircraft effective within its own border the KC-135's were essential.

At present Venezuela is the only South American country to have the advanced F-16 fighters.

Success For RAF Maverick Trials
An operational Harrier GR Mk 7 of the Royal Air Force has scored a direct hit with a Raytheon AGM-65G2 Maverick missile on a ground target at the Naval Air Weapon Station at China Lake, California. The target was small, consisting simply of two stacked shipping containers. The ongoing success of the RAF's Maverick trials reconfirms the weapon's precision capabilities and provides the RAF with a potent new capability.

For this trial a RAF Harrier Staff Pilot fired the Maverick from an operational aircraft flying at Mach 0.74, at 17,000 feet MSL and 6.8 NM range. Target acquisition was achieved as the Harrier rolled out on the final attack heading from 20 NM.

This latest shot marks the first employment of the Maverick missile by the RAF in its final integration format on the Harrier and the first from an active duty aircraft. This follows the successful employment of the Maverick during earlier integration trials in June 2000, where a Defence Evaluation and Research Agency (DERA) test pilot scored two direct hits on two separate sorties.

Last year a Raytheon team mobilised quickly and worked closely with the RAF to provide a rapid response to the Service's urgent operational requirement to address the need for new precision weapons that had resulted from lessons learned during the Kosovo campaign.

In that campaign combat operations confirmed that precision guided munitions with low collateral damage are a key requirement in the missions that the RAF now undertakes in support of peacekeeping operations. Maverick's "lock-before-launch" targeting system met this requirement. The Maverick procurement is an excellent example of how true co-operation between industry and the armed forces results in a highly satisfactory solution.

The time between contract, delivery and ISD has been kept to an absolute minimum. The Ministry of Defence selected the Maverick Missile System in July 2000 and the contract, worth approximately 42 million pounds, which covers both the system itself and support hardware, was signed in September. First delivery of missiles occurred in December and operational capability confirmed in February of this year.

Maverick is a very sophisticated and cost effective weapon that has been kept at the leading edge of capability through continual investment in new technology upgrades. Over 65,000 missiles have been produced to date with 14,000 launched including 5,300 in Desert Storm and 800 in Allied Force. During these conflicts, Maverick achieved a 93% success rate.

Perry-Class Frigate May Go To Poland
During his visit to Poland, the US President, George Bush, announced his strong support for the transfer of a second Perry-class frigate to the Government of Poland. He said he plans to work with Congress to secure legislation authorising the transfer, which will further enhance the interoperable capabilities of the Polish Navy. This would further enhance the interoperability of the Polish Navy with its NATO allies. 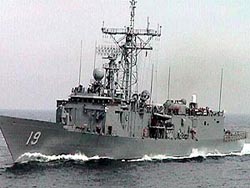 The second frigate would be a complement to the ORP Pulaski, the former USS Clark, which was commissioned into the Polish Navy last June.

To enhance their seagoing capability of the Polish Navy, the Government of Poland had requested a second frigate. The US Navy has identified a vessel that will be available as early as October 2002.

The Oliver Hazard Perry Class Guided Missile Frigates is a multi-purpose platform primarily used by the United States Navy for anti-submarine warfare operations and protection of the carrier battle group. It also has the capability to hold 2 SH-60 helicopters, enabling search and rescue operations and passenger transport.