IL-2 Development Update!
Oleg Maddox has posted 3 new screenshots and a small brief on what they are currently working on. Go to:IL-2 Forum

NVIDIA GPUs to Support AMD DDR Platform!
NVIDIA Corporation announced today that its family of GPUs are the first to fully support the new AMD Athlon(TM) processor with 266MHz frontside bus and the new AMD-760(TM) chipset with support for Double Data Rate, or DDR, memory.

"AMD is aggressively advancing the PC platform," said Dan Vivoli, senior vice president of marketing of NVIDIA. "The AMD Athlon processor and the DDR based AMD-760 chipset provide system platform that unleashes the power of our GPUs." NVIDIA

F4 Community Site Has a New Look!
The F4 Community (F4C) site has got a new design with a much more clearer look. Some new features have also been added. You can check out the site at : F4 Community

COMBATSIM.COM has obtained images of the crippled USS COLE loaded on transport vessel. Photos provided by US Navy .

A full report is available at: CNN

COMBATSIM.COM has received these awesome new screenshots from Typhoon.

Typhoon pilot awaiting a dressing down from the CO for poor flying. 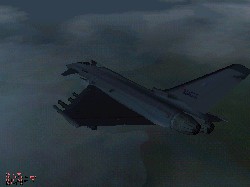 Typhoon at dusk in light cloud.

Take a B-17 Virtual Tour!
Step inside the B-17. Five Quicktime VR panoramas photographed inside a real B-17 let you take a virtual tour of this famous World War II bomber. B-17 Virtual Tour

Hercules goes a Step Further in Gaming Audio!
Hercules presents a revolutionary concept in the gaming industry - the Game Theater XP. Hercules' latest offering is the most powerful, convenient and easy-to-use audio solution ever offered to gamers. This is the first product in Hercules' new line of up-market audio solutions.

"Since our Hercules and Guillemot teams have joined forces, we are pleased to bring these same benefits to the gaming community with unique top quality features," states Claude Guillemot, President of Hercules Technologies. "Today, Game Theater XP represents a decisive innovation, introducing the new generation of sound systems that are dedicated to all gaming and multimedia applications on the market." Game Theater XPTM will be available at the end of November. Hercules

Two Navy F/A-18s Collide Over Desert!
Lt. Joe Krasinski was able to land his "battle-damaged" F/A-18 at Fallon NAS (NV), even though it was missing three feet of its right wing, and even though its fuselage was damaged, and even though both vertical stabilizers were damaged, and even though the horizontal tail surfaces were hurt, too. He and Lt. Cam Hansen, who, like Krasinski, is stationed at Oceana (VA), hit hard in the air, about 55 miles east of the base. They were both at Fallon as part of regular training. Hansen ejected, and is OK after his Saturday recovery. Both aviators were treated for minor injuries at the base clinic, and released. The accident is, as they say, being investigated. Source: Aero News. FMI: Navy News

NZ Jaguar Pilot Ejects Near Lockerbie!
Flight Lieutenant Brendan Clarke, of the Royal New Zealand Air Force, is going to be OK after his ejection from a Mk I Jaguar Friday morning. He checked into Dumfries Royal Infirmary, an RAF facility, and was soon released. He had taken off from Coltishall, Norfolk, and was flying a low-altitude training mission, when his RR-powered Jaguar swallowed "a lot" of seagulls, and the usually-comforting (to the pilot) jet noise stopped immediately. Clarke, who was alone in the Jaguar, steered away from anything that looked like habitation, and punched out. The jet impacted an empty hillside and created a fireball shortly thereafter. No one on the ground was hurt. Scotland was not kind to the military fliers that morning, as, just an hour earlier, a $40 million Merlin helicopter went into the water near Skye. All five aboard were rescued. Source: Aero News. FMI: Air Force NZ

Steel Beasts Second Printing Ready for Shipment!
Shrapnel Games announced today that the second printing of Steel Beasts is now ready to ship. The game has been on backorder since October 17th. All current backorders will ship by end of business tomorrow.