New Green Berets Screens
Take-Two Interactive today announced it will develop and publish "Green Berets". This title is expected to be released in Summer 2001. Green Berets is a squad based tactical game set in Southeast Asia.

Dominion Wars Ships
Simon & Schuster Interactive announced today that Star Trek: Deep Space Nine - Dominion Wars has shipped to retail. A space combat strategy game for the PC, Dominion Wars will allow gamers to compete against up to eight players online, or test their skills on one of 20 single-player missions. Dominion Wars will allow gamers simultaneous control of up to six different ships from any of four different races--Federation, Klingon, Cardassian, and Jem Hadar--in real-time combat. Players will be able to recruit a range of different ships and captains through the use of a point system and engage in both single and multi-player battles.

Dominion Wars takes its title and story line from the last few seasons of the Deep Space Nine television series, in which the Federation and its Klingon allies battled for control of the Alpha Quadrant against the Cardassians and the invading Dominion Alliance. The player assumes control of a fleet of up to six starships, and each mission is designed with multiple objectives.

As an added bonus in every box of Dominion Wars is a free copy of Star Trek: Starship Creator - Warp 2. With Warp 2, users can create their own Starships, import their photos and outfit themselves as Starfleet Officers. A select number of those ships and photos can now be imported into Dominion Wars for multiplayer battles. 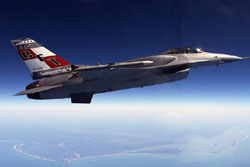 The aircraft shown here is the only F-16 in the world that is currently equipped with a conformal fuel tank. Tank testing is currently being conducted at Eglin Air Force Base, Fla. The tank, which form fits into the top of the fuselage of the aircraft, can carry about 3,000 pounds of additional fuel. (Courtesy photo)

The fuel tanks -- called "conformal" because they form fit to the top of the F-16 fuselage -- can carry an additional 3,000 pounds of fuel, said Steve Barter, Lockheed-Martin conformal fuel tank project pilot.

"The tanks add additional range to the F-16, without taking out an underwing station where the external fuel tanks that are carried on the F-16 now reside," Barter said. "Alternately, it allows us to add even more fuel by carrying fuel under the wings."

The tanks will be installed on new Block 50 F-16s bound for Greece and later on new Block 60 F-16s headed for the United Arab Emirates.

The F-16 conformal fuel tank project started more than five years ago in the Fort Worth, Texas, area. The tanks went through many tests following a redesign to make them more aerodynamic.

The tanks were at Edwards Air Force Base, Calif., for low-speed and lightweight testing before coming here for high-speed and heavy-load testing in March. Testing should be completed by late June or mid-July.

After the testing, officials said the conformal fuel tank F-16, which is the only one like it in the world, will return to Fort Worth to be fitted with fully functional fuel tanks. The plane should return to Eglin in October for further testing.

Eurofighter Launches AMRAAM and ASRAAM
The Italian Eurofighter prototype DA7 has completed a two-week series of weapons trials at the Decimomannu range on Sardinia. AMRAAM, ASRAAM and AIM-9L Sidewinder missiles were launched from the aircraft. 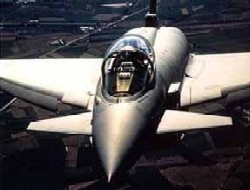 An AMRAAM S/CTV missile (Advanced medium range Air-to-Air Missile Separation/Control Test Vehicle), an inert warhead test missile with a motor to check the separation trajectory from the aircraft was launched in level flight from a height of 3,130 feet at a speed of 0.9 Mach. The test confirmed the Eurofighter's optimum launch platform qualities and the reliability and maturity of the aircraft systems.

The DA7 prototype's test cycle also included the first launch of an ASRAAM (Advanced Short Range Air-to-Air Missile) from a height of 5,000 feet at a speed of 0.89 Mach. This is an inert warhead operational missile fitted with the instrumentation necessary for data exchange with a Ground Station.

BAE SYSTEMS has completed the load survey for the baseline configuration. First DASS ground tests are to commence soon in Spain. CASA will also start assembly of the first Spanish production aircraft this month.

MILES 2000 For USAF
Cubic Defense Systems has won a $2 million contract to provide equipment that will help US Air Force security teams train for urban combat. 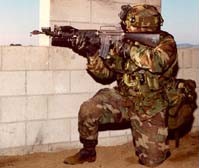 MILES 2000 is a system that incorporates laser transmitters, simulating live ammunition, mounted onto individual weapons and vehicles. The system includes lightweight harnesses and helmets that contain electronics that record every laser 'hit,' allowing commanders to view simultaneously, and record for later review, all the details of simulated battles.

The US Air Force procurement is part of a contract that Cubic won last year, making it one of a handful of bidders allowed to compete for $38 million in Army urban warfare training systems over a three year period.

International interest in urban warfare training is growing as wars increasingly are fought in urban areas. Between 1975 and 1995, when the US was involved in 27 conflicts or peacekeeping situations, nearly one third took place on combined rural-urban terrain, and about another third happened entirely within urban boundaries. Military units that have operated under these kinds of conditions include British forces on patrol in Northern Ireland and Australian forces involved in peacekeeping operations in East Timor.