EZ-VFR Add-on For Flight Simulator
Abacus Publishing announces the "EZ-VFR" add-on for Microsoft "Flight Simulator". EZ-VFR displays information about every airport known to Flight Simulator by superimposing the data over the scenery. It's an unbelievably simple idea with a very elegant solution. Developed by Konstantin Kukushkin who has brought many other innovative add-ons such as - Aircraft Animator and DynKit. "EZ-VFR" is available now for download. Click here for more information about EZ-VFR.

Air Command 3.0 Airport Design Contest
Shrapnel Games has announced the Air Command 3.0 Airport Design Contest. The contest, which runs through July 15, 2001, is intended to give would-be airport designers a chance to have their airports published. Shrapnel Games will judge the entries and award the top three designs with inclusion in Joe Jaworski's upcoming Airport Expansion Pack for Combat Command 3.0. In addition, the top three designs will earn the designers $50 each. Air Command 3.0 is an air traffic control simulation. This ATC simulation offers a full airport editor, pilot voices, and miscommunications between pilots and the tower. For more information click here.

WWII Online Partners With iGames
Strategy First Inc. and Playnet have announced a relationship with iGames for the promotion of World War II Online. IGames is hosting a one-week long Showcase Event to celebrate the release of World War II Online throughout their game centers across North America. The iGames centers will provide players with one FREE hour of play during the event and will hand out 10% coupons from Best Buy to purchase the game. iGames will hold massive national events taking players through the various battles of World War II. iGames and Playnet are developing a WWII Player Council to work through the details of these national events. Players interested in helping to put together these events can join the WWII Player Council by sending an email to [email protected] 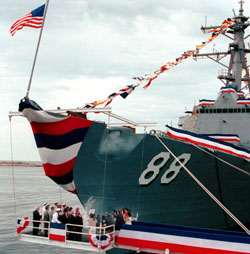 Technologically advanced U.S. Navy ships like the PREBLE "will permit America to keep its commitments to defend our shores, protect our interests, shield our allies, and promote peace, trade and democracy throughout the world," said Rep. Schrock, who represents Virginia's second congressional district. A retired Navy captain who served in Vietnam, Rep. Schrock was the principal speaker at the christening of PREBLE, named for a Revolutionary War Hero.

"PREBLE will be able to strike at targets hundreds of miles away, while maintaining her status as the least vulnerable military platform other than a submarine," Rep. Schrock said. "She can strike her adversaries wherever they exist, whether ashore, in the sky, on the seas or under the seas, and in the future, PREBLE will be a critical part of the sea-based missile defense system shielding America and her allies from weapons of mass destruction."

The congressman said when commissioned in 2002, PREBLE will join a fleet of approximately 316 ships, down from 600 ships more than a decade ago. He noted that at the current rate of construction, in the next eight years, the U.S. fleet will be reduced to approximately 180 ships. At any given time, approximately a third of our fleet is deployed, a third is en route to and from deployment and a third is at home undergoing maintenance. That means that with a 180-ship Navy, our fleet could have only 60 ships deployed around the world," he added.

DDG 88 is the 38th ship in the ARLEIGH BURKE (DDG 51) Class of Aegis guided missile destroyers - the Navy's most powerful destroyer fleet. PREBLE is the 17th Aegis destroyer to be launched and christened of 25 ships under contract or option to Ingalls. Fourteen Ingalls-built Aegis destroyers are already in the fleet.

Astute Support Partnership Agreement Signed
The BAE SYSTEMS Astute Prime Contract Office (PCO) has recently signed a partnership agreement with Her Majesty's Naval Base (HMNB) Clyde for the provision of support services for the Astute Class submarine. The Prime Contract includes weapons upgrade of boats in the previous Swiftsure & Trafalgar (S&T) Classes being undertaken by BAE SYSTEMS at Weymouth.

The subsequent contract, for which negotiations are currently in progress, will run for the first 8 boat years (equivalent to 4.5 calendar years) following the initial acceptance of HMS Astute in 2005.

This agreement is part of a detailed Contractor Logistics Support (CLS) plan currently being implemented by a joint BAE SYSTEMS, Defence Procurement Agency and HMNB Clyde team formed two years ago. Their objective is to ensure all aspects of CLS are understood and the need for integration and coherence with current flotilla's support systems is fully appreciated.

On signing the agreement Nigel Whitehead, Managing Director Astute, said: "Reaching this agreement with Her Majesty's Naval Base Clyde is a major step forward on the Astute programme."

Commodore John Borley, Director Naval Base Clyde added: "The CLS process is already driving supportability into the submarine design, and I look forward to successful implementation of in-service support for Astute in 2005."

Under a £2bn Prime Contract BAE SYSTEMS is undertaking the design, build and initial in-service support of three 7200 tonne Astute Class Submarines Type SSN for the Royal Navy. The Prime Contract has the potential for further submarines of the Class, although a final decision on this will not be taken by the MOD until the end of 2002 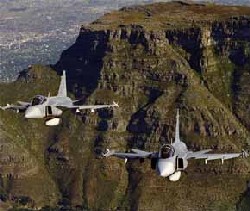 The fuselage sections will be used in the construction of a batch of fighters for Sweden's air force. South Africa, which has ordered 28 Gripens to modernise the SA Air Force (SAAF), will also be one of the customer countries. The fighters will replace about 28 old Cheetah C and D fighters. These were French Mirage IIIs upgraded with local and Israeli technology in the 1980's.

McIntyre said the deal was the latest offset element of the Anglo-Swedish partnership's R1.5 billion defence-related industrial participation obligation linked to South Africa'spurchase of 28 Gripen and 24 BAE Systems Hawk lead-in fighter-trainers. The Hawks will replace the SAAF's geriatric fleet of locally-made Aermacchi 326 (Impala) fighter-trainers, which the SAAF says are increasingly costly to maintain due to their advanced age. Denel says the work is part of the R3.5 billion umbrella agreement signed in March last year which covers work on Gripens, Hawks, the Avro RJ/RJX jetliner and Airbus aircraft.

Denel is already signed up to produce "critical elements" for the Avro regional airliner. It is also contracted to produce 18 sets of Hawk rudders and ailerons a year for 10 years.