World War II Online Ships
Strategy First and Playnet.com announced today that "World War II Online- Blitzkrieg" has shipped to stores nationwide. "WWII Online: Blitzkrieg" is a massively multiplayer online game of WWII combat, fought on land, air, and sea. Players can command tanks, pilot combat aircraft, or fight "down and dirty" in the infantry or marines. Over the course of its development, "WWII Online" will implement multiple interconnected theaters representing the global conflict of WWII. Each theater will be thousands of square kilometers in size and have the capacity to handle thousands of combatants at one time. The theater to debut in "WWII Online's" first release will be Western Europe in 1940 (Blitzkrieg). All of the combat theaters will follow along the historical time-line of the war, with North Africa, China Burma India, the Russian Front in 41 and others to follow.

Boeing To Modernize C-130 Fleet
The Boeing Company has been selected to perform the C-130 Avionics Modernization Program, which has a total potential value of approximately $4 billion. The company was notified today of its selection by the U.S. Air Force Aeronautical Systems Center at Wright Patterson Air Force Base, Ohio. Final contracts will be signed pending program approval by the Defense Department's Defense Acquisition Board. 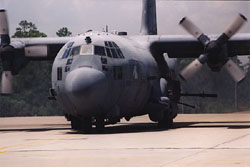 Under the program, Boeing will develop a modern, common cockpit avionics system for the approximately 500 C-130 transport aircraft in Air Force service.

"The C-130 AMP represents a major milestone in the convergence of military and civil avionics technology," said David Spong, president of Boeing Military Aerospace Support. "We brought a broad spectrum of capabilities from both the military and commercial components of Boeing, and from our supplier teammates, to offer a low-risk, affordable and highly capable solution to the C-130 AMP program.

"The U.S. Air Force evaluation was exceptionally thorough and comprehensive," he added. "I am very proud of our team, which brought the best of Boeing and our supplier teammates together to compete successfully for this critical modernization program."

By focusing its modernization and upgrades capabilities; maintenance and modification centers; training systems and services; contractor logistics support and services; and sustainment data and spares and technical data competencies in the Military Aerospace Support business, Boeing is the only major airframe manufacturer with an integrated organization structured to provide total life-cycle customer support for military aircraft and weapons systems.(Boeing Photo)

The missile, made by Lockheed Martin Missiles and Fire Control, was launched from a US Air Force B-52 bomber flying at Mach 0.85 at an altitude of 30,000 ft. mean sea level above the New Mexico desert. After the weapon was released, it deployed its wings and tail and autonomously navigated itself to the pre-mission planned, hardened bunker target. The missile flew for 23 minutes, navigated through 10 waypoints and travelled approximately 195 miles.

To strike the target, JASSM used its integrated inertial guidance unit/global positioning system (GPS) to navigate a preplanned route to the target area. Once in the target area, JASSM used its imaging infrared seeker and on-board, real-time automatic target correlator algorithms to precisely locate and guide the missile to the desired target aimpoint. The live warhead penetrated the concrete roof of the bunker and detonated inside, destroying the target.

JASSM has now completed 22 flights: 6 powered; 4 unpowered; and 12 jettisons. This latestflight was designed to demonstrate JASSM system performance by defeating a hardened target and testing a production representative missile from the B-52 aircraft platform.

"The success of today's test on the B-52 also brings the programme closer to its platform integration goals," said Larry Lawson, vice president of Strike Weapons at Lockheed Martin. "We are showing that JASSM is the weapon of choice against a varied target set and will be operational on B-2, B-52, B-1, F-16 and F/A-18 E/F aircraft.

"This B-52 test, once again, puts all the elements together for a JASSM mission," said Brigadier General Randall K. Bigum, Director of Requirements at Air Force Air Combat Command, Langley AFB, Va. "The mission demonstrated the long range, precision and lethality that JASSM brings to the warfighter. This was the first launch of a full-up, live JASSM round from a bomber platform. We ... look forward to starting low rate initial production (LRIP) in the fourth quarter of this year."

In the previous live warhead flight test (DT-2), JASSM established the missile's ability to fly to, hit, and destroy surface targets when launched from an F-16 Fighting Falcon.

One of the Department of Defense's highest priority programmes, JASSM is designed to give Air Force and Navy pilots long-range standoff capability against a wide array of high value, heavily defended targets. Its anti-jam GPS satellite navigation system, infrared seeker, 1,000-pound penetrator warhead, and stealth airframe make it extremely difficult to defend against.

First Trimaran Warship Visits USA
Research Vessel (RV) Triton is visiting the USA's East Coast this month to carry out a collaborative trials programme with the US Department of Defense (DoD). RV Triton is the world's first trimaran warship, claimed by the UK's Defence Evaluation and Research Agency (DERA) to be one of the most significant developments in warship design since the Ironclads. 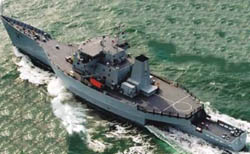 Owned and developed by DERA, (soon to change its name to QinetiQ), RV Triton arrived in New York in time to take part in Fleet week. From New York she paid short visits to Newport, Rhode Island and Philadelphia before finally arriving in Washington DC early on Sunday 3 June.

Measuring 91 metres in length at the waterline and with a beam of 22.5 metres, RV Triton is the world's first motor powered trimaran warship demonstrator. She was built at the Vosper Thornycroft yard in Southampton, England where she was launched in May 2000 and handed over to DERA at the end of August.

Ultimately, RV Triton will determine whether the triple-hull form will be suitable for consideration for the Future Surface Combatant, which will replace the Royal Navy's current Type 22/23 Frigates.

The structure of RV Triton is representative of a warship and is similar in style to a typical Royal Navy frigate. Induced strains and structural responses throughout the ship are being measured and recorded by the US Navy's Trials Instrumentation System (TIS), which was fitted under an inter-governmental agreement. TIS records over 300 channels covering a wide range of data from structural instruments and other sources such as machinery control, ship motion, steering gear, navigation and the environment. Collaborative work between the UK Ministry of Defence and the US DoD will continue for the first 18 months of sea trials.

The US Coastguard has taken an express interest in the triple-hull design and, whilst RV Triton is off Portsmouth, USA, they are taking the opportunity to conduct side by side trials with a 270ft Coastguard cutter so that hydrodynamic trials results can be compared.

Raytheon To Provide Patriot Improvement Kits
Raytheon Company has received a $53 million contract to provide the U.S. Army with kits that will enhance the capability of the Patriot Air Defense System's radar. The contract specifically is for four Radar Enhancement Phase III (REP III) kits and four Classification, Discrimination and Identification Phase 3 (CDI-3) kits for the Patriot radar. The contract award from the U.S. Army Aviation & Missile Command, Redstone Arsenal, Ala., includes spares and integration of the kits. 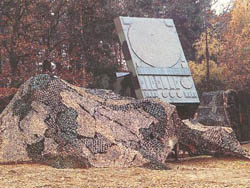 The REP III improvements double the average power of the Patriot radar, while the CDI-3 kits add a wideband capability to the radar for generating and processing high range and medium range resolution waveforms for target discrimination. "These improvements will give the Patriot radar more capability in its surveillance, tracking and missile guidance functions. By adding CDI-3, we have increased Patriot's discrimination ability against ballistic missile warheads, debris, tankage and decoys," said Walter Putis, Raytheon vice president and Patriot program manager. This latest award continues the upgrade modifications Raytheon is currently performing on the U.S. Army's Patriot radars.

New Zealand Navy To Get First Super Seasprites
The first two of the Royal New Zealand Navy's five new SH-2G(NZ) Kaman Super Seasprite maritime multi-mission helicopters are due to arrive in Auckland Wednesday, the Defense Ministry says. Built by Conn.-based Kaman Aerospace Corp., the SH-2s will be unloaded from the ship Taronga at Auckland's Bledisloe Container Wharf and then flown to Auckland International Airport for about a month's worth of final checks and acceptance testing. 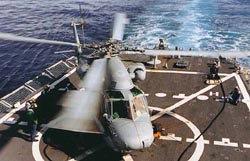 Kaman and New Zealand's Safe Air Ltd. will handle the tests, and then the aircraft will be handed over formally at Whenuapai air field in late July at the Auckland air base, says Defense Minister Mark Burton.

New Zealand will fly the Super Seasprite from ANZAC- and Leander-class frigates on a range of surveillance, combat and support missions, and the aircraft will be armed with AGM-65 Maverick missiles, Mk. 46 torpedoes and depth charges.

The third and fourth helicopters are expected to follow shortly. The fifth, the result of an option exercised two years after the 1997 contract award, is slated for delivery early in 2003.