Online Pearl Harbor Reenactment Announced
Electronic Arts has announced a "Pearl Harbor What If Battle", and is inviting online pilots to engage in an Air Warrior III Pearl Harbor scenario. The June 23 online reenactment of the infamous battle has a new twist: the U.S. heeds an advance warning of the impending assault. Participants will be able to chose their side, position, and plane. In addition, EA.com has opened up its Pearl Harbor Arena, enabling pilots to prepare for the actual battle. Participation requires a subscription to the EA Platinum service, which, at ten dollars per month, gives users access to a number of online games, including Air Warrior III. Click here for more information.

NVIDIA's nForce is comprised of two platform processors: the nForce Integrated Graphics Processor (IGP) and the nForce Media and Communications Processor (MCP). Both the NVIDIA nForce IGP and MCP feature built-in support for AMD(R)'s HyperTransport(TM) interconnect technology, delivering the highest continuous throughput between the two platform processors. Additionally, both the IGP and MCP have underlying technologies that, when combined into a single, balanced architecture, substantially increase overall system performance.

nForce is the architectural foundation for Microsoft's Xbox game console. In addition, NVIDIA has secured design wins with the industry's top PC ODMs, including ASUS, MSI, GIGABYTE, Mitac, and Abit; and expects to announce many other OEM design wins by the winter of 2001.

KYRO and KYRO II are ST's 3D Graphics and Video Accelerators derived from the partnership between ST Tile Based Rendering takes a different algorithmic approach to 3D, aiming to eliminate redundant processing and avoid memory bottlenecks. By doing only what is absolutely necessary, and by keeping as much 3D processing as possible on-chip, TBR allows maximum performance to be extracted from the available memory bandwidth. The advantages of Tile Based Rendering will only increase as future applications increase in complexity.

Three Die At Air Show
During the Biggin Hill air show in Kent, U.K., this past weekend, two crashes in as many days killed three people. On Saturday a De Havilland Vampire was halfway through the day's final display with a Vixen plane when it spiralled out of control and crashed in a ball of flames. Air show spokesman Nick Smith said: "I can think of no other way to describe it other than it just fell out of the sky. 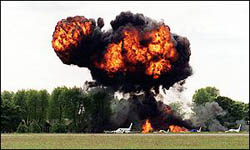 Less then 24 hours later a World War II Bell King Cobra fighter had flown four times in front of the crowd before trying to turn when it corkscrewed twice before plummeting from the sky into a ridge. The plane came around 100 yards from a row of terraced houses, showering some gardens with debris. The aircraft crashed into the ground and exploded in a ball of flames on the side of the airfield away from the crowd, organisers said. The Air Accidents Investigation Branch (AAIB) has launched an inquiry into the accidents. Click here for the full story.

U.S. Navy's Newest Aegis Destroyer To Be Christened
The U.S. Navy's newest Aegis guided missile destroyer, known now as hull number DDG 88, was launched today by Litton Ingalls Shipbuilding, a Northrop Grumman company, and will be christened here June 9, 2001. One of the nation's early naval heroes will be honored when the new ship will be officially christened with the name PREBLE to honor Commodore Edward Preble, (1761-1807), a pioneer in U.S. naval and merchant marine service. 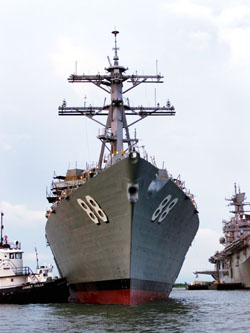 PREBLE (DDG 88) is the 38th ship in the ARLEIGH BURKE (DDG 51) Class of Aegis guided missile destroyers -- the Navy's most powerful destroyer fleet. These highly capable, multimission ships can conduct a variety of operations, from peacetime presence and crisis management to sea control and power projection, in support of the national military strategy.

DDG 88 is the 17th Aegis destroyer to be launched and christened of 25 ships under contract or option to Ingalls. The company's first 14 Aegis destroyers have been delivered to the Navy. Two additional ships now in production at Ingalls will precede DDG 88 into the fleet.

The mission of PREBLE will be to conduct sustained combat operations at sea, providing primary protection for the Navy's aircraft carriers and battle groups, as well as essential escort to Navy and U.S. Marine Corps amphibious forces and auxiliary ships, and independent operations as necessary. DDG 88 will be capable of fighting air, surface and subsurface battles simultaneously. The ship contains myriad offensive and defensive weapons designed to support maritime defense needs well into the 21st century.

In naming DDG 88 PREBLE, the Navy for the sixth time honors Commodore Preble, who was born Aug. 15, 1761, at Falmouth, Eastern Massachusetts (now Portland, Maine). In 1779, he was appointed to the Massachusetts State Marine, becoming an officer in the 26-gun ship PROTECTOR. Becoming a British prisoner when the ship was captured in 1781, he was held for a time on the prison ship NEW JERSEY. Upon his release, Preble served on WINTHROP and led a boarding party to capture a British brig at Castine and worked it out to sea despite heavy shore fire.

Fifteen years of merchant service followed his Revolutionary War service and in April 1798 he was appointed First Lieutenant in the Navy. Commanding the Third Squadron in 1803, with CONSTITUTION as his flagship, he sailed for the Barbary Coast where he promoted a treaty with Morocco and established a blockade off Tripoli. Relieved in September 1804, Preble returned to the United States in February 1805 and became engaged in shipbuilding activities in Portland.

Israel Selects Pratt & Whitney Engines For IAF
High ranking officials from the Israel Ministry of Defense met with employees of Pratt & Whitneys East Hartford, Connecticut facility to announce that the companys F100-PW-229 engine had been selected to power the Israel Air Forces follow-on buy of fighter aircraft. Dalia Rabin-Pelossof, Israels Deputy Minister of Defense, and Major General (Res.) Amos Yaron, Director General of Israel Ministry of Defense, spoke to a group of several hundred employees to personally inform them of the award decision, which has an approximate value of $300 million over the life of the program.

This latest procurement marks the third consecutive time that Israel has selected Pratt & Whitneys F100 engine to power our front line fighters, said Yaron. Since the beginning of the Israel Air Force in 1947 with the famous Wasp engine, Pratt & Whitney has been an integral part of our engine world. Yaron said the official contract would be signed later in the month, and would cover up to 61 engines for delivery in the years 2005-2008.

The Israel Air Force today operates more than 600 Pratt & Whitney military engines on some of the most critical missions in the world, said Louis Chênevert, Pratt & Whitney President. We have worked hard to make the F100 the safest, most reliable fighter engine in the world, and we are proud that our efforts have been rewarded with the trust and confidence of the State of Israel.

Rabin and Yaron were joined by several other high ranking Israel government officials on a tour of selected United Technologies Corporation facilities in Connecticut. The visit to East Hartford was preceded by a visit to Sikorsky Aircraft in Stratford, and was followed by a tour of Pratt & Whitneys Middletown assembly plant.

US Navy Delays Decision On DD 21 Programme
The US Navy has delayed the decision to choose between competing shipbuilding consortia for the $30 billion DD 21 programme, pending the results of Defence Secretary Donald Rumsfield's review of US military priorities.

Under the programme the Navy is to buy 32 advanced destroyers over 35 years at a combined cost of about $30 billion, or $750 million per unit after the fourth ship. Highly modular in design, the electric-powered DD 21 would be equipped to attack foes hundreds of miles inland as well as fight at sea. However, the decision, already postponed since March, has now been put back indefinitely.

"This is a significant programme approaching a significant milestone," said Under Secretary of the Navy Robert B. Pirie, Jr. "As we continue to look at how the Navy will be shaped in the 21st century by participating in the ongoing strategic reviews, it is only prudent to ensure DD 21 reflects the results of those reviews."

In its announcement, the Navy said the competing DD 21 design teams would continue their system development work under a fiscal 2001 contract. The postponed contract award, valued at $9.9 billion, would cover 10 years of research and development plus the first four ships. Production of the ships would be split between the two consortia, but the winning team would get 85 percent of total operating and support costs booked with subcontractors over the life of the programme, valued at up to $70 billion.

With the current reviews of defensive priorities and Bush's missile intentions hanging over it, this announcement is further evidence of the US defence community holding its breath until the new administration reveals concrete plans.

NASA X-43A Destroyed In Flight
NASA first attempt at testing a new scramjet ended in failure on Saturday when the US agency had to destroy the X-45A and its booster five seconds after they were launched from a B-52 flying over the Pacific Ocean. 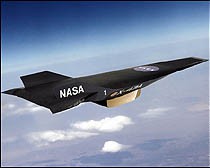 A NASA statement said that "...following pre-launch countdown and separation from the B-52, a malfunction occurred five seconds in to the boost phase that caused the Hyper-X stack (Hyper-X vehicle and booster) to depart from controlled flight. The debris impacted within the pre-cleared range impact area in the Pacific Ocean."

A NASA spokesman said that the malfunction that caused the destruction appeared to be in the Pegasus XL booster rocket manufactured by Orbital, although that would have to be confirmed after telemetry data had been studied.

This mission was the first of three flights to demonstrate an airframe-integrated, "air-breathing" propulsion system design called a scramjet, which so far has only been tested in ground facilities, such as wind tunnels.

A ramjet operates by subsonic combustion of fuel in a stream of air compressed by the forward speed of the aircraft itself, as opposed to a jet engine where a compressor section compresses the air. The scramjet is a ramjet engine in which the airflow through the whole engine remains supersonic. The fuel for the X-43A is hydrogen.

The X-43A is a 12-foot-long, unpiloted research vehicle. The booster accelerates the X-43A until it

Two more research flights (one flight at Mach 7 and one at Mach 10) were planned, but have been put on hold until the cause of this failure is identified. The NASA spokesman would not speculate on when the remaining tests would take place. (NASA Image)