Operation Flashpoint Coming This Fall
Codemasters has announced that it will ship Operation Flashpoint to retail stores in North America this September, though Europeans will be able to purchase the title mid-June. To offset grey market sales, Codemasters has decided to add new features to the North American version including multiplayer features such as dedicated server functionality and enhanced network code. A free patch that will upgrade the European version with the same features will be released when the U.S. product ships. Operation Flashpoint takes place in the Cold War-era Soviet Union, and players assume the role of NATO soldiers on a peacekeeping mission. Through the course of the game's different missions, players can control a variety of vehicles, including jeeps, helicopters, and more. 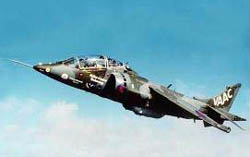 As part of a research programme into technologies required for Deep Strike platforms, such as the Future Carrier Based Aircraft (FCBA) or Future Offensive Air Capability (FOAC), the team demonstrated the VAAC Harrier's capability to fly automatically to a moving recovery point.

The target was a 'simulated ship' in the form of a trials vehicle travelling at ship speeds along the runway at DERA's Boscombe Down site. The VAAC Harrier was flown out to a range of some 30 miles, where DERA Fast-Jet Test Squadron (FJTS) test pilots commanded the guidance system to generate a recovery trajectory back to the predicted ship rendezvous location. The pilots then monitored the automated recovery, which included trajectory elements defined to meet local airspace restrictions, through the descent and deceleration to end with a steady controlled hover alongside the simulated ship.

Fred Scorer, DERA's Trial Manager, said: "The research work demonstrated in this trial should lead to the ability to operate future STOVL aircraft in much poorer weather conditions than is currently possible with Harriers. This puts us well on the way to showing how the requirements for automatic STOVL operations with the Joint Strike Fighter (JSF) can be met. The core routing and guidance elements can also be applied to a range of air-vehicles and flying tasks, not just STOVL recovery."

The demonstration pulled together research in disparate technology areas. Advanced flight control was used to stabilise the aircraft and provide a high performance autopilot capability. Navigation algorithms, sensor integration techniques and covert data-link technologies were developed to meet the needs of integrating navigation data between multiple moving vehicles. An advanced Flight Management System (FMS) capability enabled the en-route trajectory to the approach gate to be predicted and mechanised by the on-board 4-D guidance. Subsequently, a seamless transition was made to the approach phase, using relative position data provided by the covert data link.

The system offers total flexibility in terms of approach route, speed and height profiles and the required time of arrival at the 'ship' can be achieved to within a few seconds.

This research will be taken forward from April 2001 to incorporate a fully automated touchdown, demonstrated in either land-based or possible ship-borne trials.

DERA's VAAC Harrier has been modified to study control concepts for powered lift aircraft. Detailed modifications to its two-seater format have introduced a digital flight control system that offers advanced, programmable fly-by-wire capabilities from the rear seat. The result gives the rear pilot full-authority, digital control of the aircraft via a computer interface allowing different flying modes to be developed and installed.

The VAAC Harrier's digital flight control system has three key implications. Firstly it allows the testing of different flying modes in real-flight environments. Secondly, modifications to the software and the flying experience can be swiftly and easily accommodated between flights with significant benefit of incorporating pilot feedback practically instantaneously. Thirdly, it offers STOVL capability without the need for the tricky third nozzle control lever, thus significantly improving reducing pilot workload.

The pilot will have direct control of output variables such as speed, bank attitude, climb/dive angle, hover height, side slip, instead of flight control surfaces.

The JSF trials with the VAAC Harrier builds on prior DERA/NASA research into advanced control laws but represents the first comprehensive shipboard evaluation. This research will help reduce the risk of the JSF STOVL flight control system development efforts as the programme enters the EMD (Engineering & Manufacturing Design) phase. 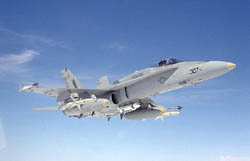 Casher died when the single-seat plane crashed nose-first Tuesday morning in a remote cow pasture near Lake Okeechobee, Fla., and military investigators are on the scene today trying to piece together what went wrong. The U.S. National Transportation Safety Board and the Federal Aviation Administration are also probing the mishap.

Casher was on his way to the naval air station in Key West, Fla., for training along with 10 other Hornet pilots. Officials said the other fighters arrived safely.

Tuesday's crash was the fifth Class A mishap for the U.S. Navy's fighter fleet this year, and the 12th in the past 12 months. Class A fighter mishaps for the fleet are a little behind last year's pace, however - through this time in 2000, the Navy had lost seven fighters in Class A crashes.

A Class A mishap is one that involves at least one fatality, destroys an aircraft or inflicts damage exceeding $1 million.

CO Relieved of Command After Kuwait Accident
Commander David Zimmerman, commanding officer of Oceana-based Strike Fighter Squadron (VFA) 37, has been relieved of his command as a result of his actions during a live-fire training accident at the Udairi Range in Kuwait March 12.