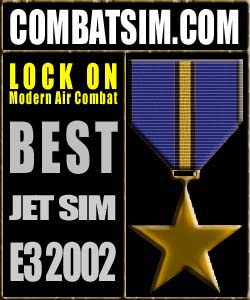 Return to Castle Wolfenstein Patch v1.33 & GoTY Pack
Activision has released another patch for Return to Castle Wolfenstein, upgrading the WWII FPS by Gray Matter and Nerve Software to version 1.33. This release brings the game in sync with the imminent GOTY Edition, you can upgrade from the previous v1.32 or any older version, and it addresses the Medic Revival Sticking bug along with improving PunkBuster WebTool support and adding a few new console variables. Further, the Game of the Year Map Pack is now available for owners of the original game, offering three previous maps (Trenchtoast, Icelab and Tram Siege) along with four new maps: Chateau, Keep, The Damned and Rocket. Full Patch v1.33 -- Upgrade 1.32 to 1.33

New Screens: Platoon
Here are new screens from Digital Reality's new 3D tactical combat game, Platoon: The 1st Airborne Cavalry Division in Vietnam. Platoon covers the period from the early days of the conflict (late 1965) to the height of battle in 1968, and recreates some of the most trafic moments of the Vietnam War: Operation "Shiny Bayonet", the Pleiku Campaign, Operation "Pershing". 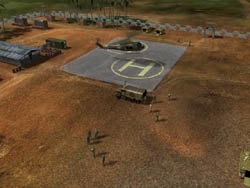 You are Martin Lionsdale, newly wed and new recruit of the US Army. As the story and events unfold, you will come to know his emotions, his relationship with his wife, and the War itself.

You will also come to know several key members of the platoon. As you successfully carry out your missions, you will climb the ranks to become a Lieutenant and be responsible for a full platoon of infantry (up to 30 men) composed of specialist soldiers: rifleman, sniper, scout, machine gunner, grenadier, engineer, commando. Release Date: Late 2002 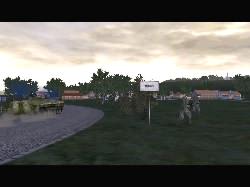 Military News MC-130H Crashes in Afghanistan
A U.S. Air Force MC-130 crashed on takeoff about 1 p.m. EDT, June 12, near the Bande Sardeh Dam in Afghanistan. Seven of the ten servicemembers aboard the aircraft survived and were transferred to the medical facility at Qandahar for treatment. The three other servicemembers were killed in the accident. Their remains have been recovered and are being prepared for shipment back to the United States. 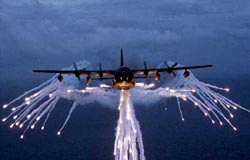 The cause of the crash is not known at this time, although it does not appear to be the result of hostile fire. The names are being withheld pending notification of next of kin. The incident is under investigation.

The demonstration of efficient supersonic combustion ramjet (scramjet) performance with a liquid hydrocarbon fuel is a crucial step toward enabling a viable hypersonic cruise missile. The test is the first demonstration of net positive engine thrust for a fully installed, hydrocarbon-fuelled scramjet missile engine. Additional tests are being planned for later this summer at the Air Force Arnold Engineering and Development to verify operation at Mach 3.5 and 4 flight conditions, which will simulate the hypersonic engine taking over following a rocket boost.

The engine will be used in the four-year, joint DARPA/ONR Hypersonic Flight Demonstration programme called HyFly, the objective of which is to flight-test a missile demonstrator able to cruise at speeds of up to Mach 6 to a range of 600 nautical miles using liquid hydrocarbon fuel. The HyFly programme is being performed by a team consisting of The Boeing Co., Aerojet, Johns Hopkins University Applied Physics Laboratory, and the Naval Air Warfare Centre. The engine is a dual combustion ramjet engine developed by The Johns Hopkins University Applied Physics Laboratory under ONR's Hypersonic Weapon Technology programme.

Developmental flight tests of the HyFly demonstrator vehicle start early in FY 2004 with demonstration of a surrogate submunition deployment planned for March 2004. The programme plans to progress to powered flights at Mach 4 in November 2004, with Mach 6 flights starting a year later. 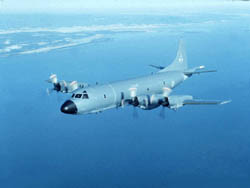 Under the contract, General Dynamics Canada will supply a new mission computer, integrate upgraded sensors, and provide ground facilities and logistics support. The General Dynamics-designed data management system will provide the enhanced capability and flexibility required to allow the CP-140 Aurora to fulfill its surface and undersea surveillance roles. Work will be completed in Ottawa and Halifax.

F-22 Passes 2,000 Flight Test Hours
Having passed the 2,000-hour mark, the F-22 flight test programme is pushing ahead toward the start of operational testing. The 2,000th flight hour came with two Raptors in the sky and two more in preparation for flight tests later that day. Raptor 4006 was airborne on an avionics electronic warfare mission with Col. Chris Seat, F-22 Combined Test Force director, at the controls, while Boeing F-22 test pilot Randy Neville was in the air with Raptor 4003 flying an envelope expansion mission.

According to Seat, the 2,000 hours have provided data necessary for the continued development and evaluation of the Raptor's performance, manoeuvrability, stealth technology and integrated avionics. These capabilities will ultimately provide the Air Force Operational Test and Evaluation Centre, or AFOTEC, with a weapon system that is ready to meet the operational requirement challenges of Dedicated Initial Operational Test and Evaluation, slated to begin in 2003. 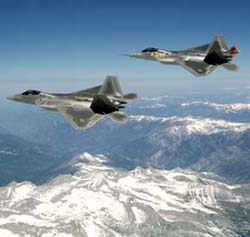 The 2,000-hours of safe flight test are a significant achievement for the Combined Test Force and F-22 program, said Seat. "These hours are a real indicator of just how well the Raptor is performing and maturing as a weapon system and are a direct result of the hard work, dedication, discipline, and professionalism of the integrated government-contractor, development-operational test team," Seat added.

"On a daily basis we are out doing heavy maneuvering at the extremes of the F-22 airspeed envelope, from supersonic to very low airspeeds", Neville said. "Envelope expansion testing, combined with avionics testing, is providing critical data on all of the major technological features of the Raptor."

With the 2000-hour mark behind it, the test force is poised to successfully complete the F-22 development flight test program, said Seat. The director added that AFOTEC is a growing member of the test team and is also readying for initial operational tests.