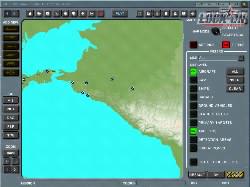 The new technology supports full movement of any object, more-realistic lighting and day-night cycles, and full 3D sound with Doppler effects. It will let Flight Simulator creators script detailed movements such as doors opening, car wheels turning, and luggage conveyor belts transferring luggage into a cargo hold. Human movement can also be simulated, and movements can be linked together to create complex sequences. Three movies showcasing the capabilities of the technology can be seen at - Wilco Publishing

Half-Life, Counter-Strike Updates Released
Gamespot is reporting that Valve Software has announced the next updates for Half-Life and Counter-Strike, its popular action games, will be released today. Both Half-Life version 1.1.1.0 and Counter-Strike version 1.5 will include the Ricochet Mod, the second phase of Valve's recently introduced anticheat technology. A new Counter-Strike map, de_piranesi, will also be included, along with a number of fixes and refinements. Download the English retail full v1.1.1.0 patch. For further details click here 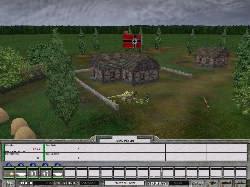 Players campaign American or German troops through tactical excursions of enemy artillery barrages, beach landings, snipers, bridge crossings, and loads of heavy tank fire! Whether it is commanding a group of squads to infiltrate an enemy outpost, or jumping into the trenches with a single steadfast dogface, GI Combat excels at delivering the complete combat experience.

GI Combat will feature campaigns with dozen of historical and hypothetical scenarios beginning at D-Day, and carrying through Patton's lightening breakout from the Normandy Beachhead.

Military News Visby 'Stealth Ship' Handed Over to Swedish FMV
Kockums has handed over the Visby corvette stealth ship to its customer, FMV (The Swedish Defence Materiel Administration) following pre-commission inspection approval and a series of successful checks. The crew now assumes responsibility for the vessel and will continue to conduct a series of sea trials and make final adjustments.

"It is of course highly pleasing that these pre-delivery checks have been completed in such a satisfactory manner. This is final proof that the Visby corvette really fulfils its performance specifications, and heralds the start of a new era in naval thinking," said Brje Appelqvist, who heads the Surface Vessel Division at Kockums. 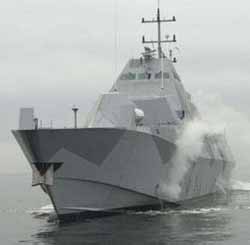 The Visby corvette is designed to full stealth specifications and constructed in carbon fibre, making her difficult to detect, even for the latest radar and IR-surveillance equipment. The decision to invest in stealth technology was taken by the Swedish Government in 1995. In all, five vessels are on order at Kockums with an option on vessel number six. The Swedish Defense Materiel Administration (FMV), which has ordered the vessels on behalf of the Swedish Navy, has been involved in the technical development and planning of the project.

The concept is founded on seven years experience with the "Smyge" prototype and technology demonstrator. Sweden's Royal Institute of Technology (KTH) in Stockholm, has participated in the project along with Saab, Ericsson Microwave Systems, Bofors Defense, GDC, and General Dynamics Canada.

The Visby-class vessels are surface combat ships, capable of fulfilling mine clearance and ASW (Anti-Submarine Warfare) roles as well as mine laying, surface combat, underwater defence and air defence roles. Minimal radar and noise signatures, magnetic properties and high impact-resistance enhance the vessel's active self-defence systems. In order to keep signatures to a minimum, the hull features large, flat surfaces and sharp edges. To lower the IR-signature, the gas turbine exhaust pipes and emissions are shielded at the stern, close to the surface of the water. The hull is entirely non-magnetic, and onboard equipment is either demagnetised or constructed of non-magnetic materials.

The pre-programmed autonomous mission included vertical takeoff and navigation through various waypoints while changing altitude, heading and airspeed, followed by a return to a predetermined touchdown point. After an autonomous engine start, through detailed systems checkout and launch, the vehicle completed a series of climbs and descents, reaching an altitude of 4,000 feet and an airspeed of 30 knots. The vehicle completed a series of turns and reversals and airspeed changes before returning to the hover position over the intended point of landing. All objectives were met under autonomous control. 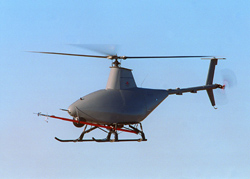 The Fire Scout system is designed to be a force multiplier for the Navy forces at sea and Marine Corps forces ashore. It uses flight control architecture derived from the Northrop Grumman Global Hawk high-altitude, long-endurance reconnaissance system. Capable of flying at altitudes of up to 20,000 feet, the Fire Scout system employs a payload with an electro-optical/infrared sensor including a laser designator/rangefinder to provide reconnaissance and surveillance that gives military decision-makers information and targeting of enemy resources and personnel on the ground. The Fire Scout communications suite allows simultaneous voice/data relay further than the ''line of sight'' limits employed by current systems.

Fire Scout is designed to fly above deployed Marines to watch for threats within 150 nautical miles of the ground control station. The system can then direct Navy and Marine weapons to targets by relaying target location co-ordinates or the onboard laser designator. The system was designed to replace the ageing Pioneer.

Developed by Raytheon and the U.S. Army, the LTWS combines rugged, lightweight construction with Raytheon's advanced thermal imaging technology to give the infantryman the ability to shoot equally well day or night, through battlefield obscurants, adverse weather and zero-illumination situations. Weighing less than three pounds, it features a 2-to-1 electronic zoom, electronically programmable reticles, and a Liquid Crystal Display. The LTWS is powered by commercially available AA batteries and utilizes an eyecup- activated stand-by mode for power conservation. The LTWS successfully completed the U.S. Army's initial operational testing in December 2001 and is part of Raytheon's line of proven, fielded weapon sights that include the AN/PAS-13 Medium TWS and Heavy TWS configurations. 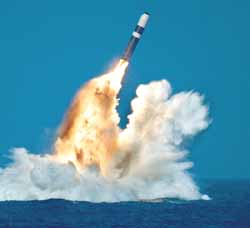 The only U.S. submarine-launched strategic missile system in production today, the Trident II FBM was first deployed in 1990 and is planned for deployment past 2020. It is launched from U.S. Navy Ohio-class (Trident) submarines and has a range of 4,000 nautical miles.

Senate Committee Warned Of Potential Threat of UAVS
The Senate Governmental Affairs subcommittee on international security, proliferation and federal services has been hearing testimony with regard to the International threat presented by unmanned aerial vehicles (UAVs), and the measures by which the United States is attempting to curb this danger.

Acting Deputy Assistant Secretary for Nonproliferation Vann Van Diepen, told the subcommittee, "Just as they provide real opportunities for US and allied militaries, UAVs also provide opportunities for our adversaries to threaten us." 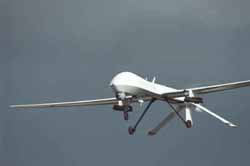 "UAVs are potential delivery systems for weapons of mass destruction (WMD), and indeed are ideally suited for the delivery of chemical and biological weapons (CBW) given UAVs' ability to disseminate aerosols in the right places at the right altitudes," said Van Diepen.

In his testimony, Mr Van Diepen explained that while UAVs have been earmarked as a significant technology in the future of aeronautics, both military and civil, due to the variety of versatility of the models available, this means that the precautions governing such technologies must be that bit more stringent. "US efforts to impede threats stemming from the proliferation of UAVs and their technology encompass a broad spectrum of measures. As in other nonproliferation areas, the US attempts to use aggressively all of these tools to affect various aspects of the UAV proliferation threat."

The major tool employed by the US to regulate the spread of UAVs is the Missile Technology Control Regime (MCTR), which governs the proliferation of all unmanned flying craft including cruise missiles. The MCTR, from its inception in 1987, has controlled the spread of not simply UAVs themselves, but also the materials and components required to produce and operate them. The US is also party to a series of agreements and treaties such as the Nuclear Nonproliferation Treaty and the Wassenaar Agreement that help control possible terrorist or rogue state actions. There are further missile sanction laws that are designed to deter other nations from supplying UAVs to the wrong hands.

However, Van Diepen warned that the US must continue to enhance its safety measures in order to stay in step with technological advances. "We will need to keep working hard to keep pace with the threat, not only because our adversaries are determined, but because the increasing reliance on UAVs world-wide (including in civilian roles) and the dual-use nature of much UAV technology will make our job more difficult in the future," he said.

US Navy Tests MIDS-LVT on F-18
In an era where real time information exchange provides a critical edge in the battlefield, the Multifunctional Information Distribution System - Low Volume Terminal (MIDS-LVT) is on track to deliver the goods. The system is expected to bring the F/A-18, surface ships and allied air and sea platforms a new level of interconnectivity, providing operations with real time information exchange.

The programme recently completed the first part of their Technical Evaluation (TECHEVAL) test phase with flights aboard an F/A-18 during the Joint Combat Identification Evaluation Team (JCIET) exercise at Eglin Air Force Base, Florida.

MIDS, an advanced, high capacity, jam resistant, digital communication link, is used for the exchange of near real-time secure voice and data information among air, ground and sea elements engaged in tactical operations. As the next generation, Link-16 compliant, Command, Control, Communications and Intelligence (C3I) system, MIDS is designed to speed the exchange of target information between a variety of platforms through the use of Surveillance, Air Control, and Fighter-to-Fighter networking capabilities. The system is compact and contained in a black box for easy flight-line maintenance.

Gary Kessler, F/A-18 Deputy Programme Manager for Systems Development, explained, "MIDS is going to change the way the Hornet fights in battle. The pilot has complete situational awareness of the whole battlefield - all the time, without getting pieces of information from other data. MIDS pulls information together from other platforms and cuts down both the pilot's workload and decision time. The programme is one of the most complex integration efforts ever attempted."

The MIDS-LVT, as installed in the F/A-18, demonstrated a capability to increase aircrew situation awareness throughout all phases of the mission with a potential to revolutionise the way the aircraft is employed. VX-31 MIDS Project Officer, Maj. Brian Kelly (USMC) commented on the overall success of the exercise saying, "All around situation awareness was spectacular during the JCIET. Aircrews now realize how important Link-16 will be in future combat missions."

JCIET is a large-scale tactical evaluation that employs equipment and personnel from all armed services to evaluate, investigate, and assess various concepts of Combat ID on the battlefield. A combined detachment, five F/A-18 aircraft from Air Test and Evaluation Squadrons, VX-23 from Patuxent River and VX-31 from China Lake were deployed to Eglin Air Force Base, Florida. It involved aircrew, engineers and maintenance personnel from Patuxent River, China Lake and Boeing who work together to achieve common test objectives. Operational test aircrew from VX-9 also took part as part of an ongoing evaluation and continued involvement in the test programme.

Kessler said, "JCIET was an exercise that showed how MIDS would work in a real life battlefield situation. The system performed wonderfully. This gives us confidence and highlights critical areas to address as we finish up TECHEVAL and go into OPEVAL (Operational Evaluation) this fall. At the same time MIDS goes to OPEVAL to achieve Initial Operational Capability, we will turn the system over to newly formed F/A-18E/F squadrons'VFA-14 and VFA-41 for training for deployment as part of the Nimitz Battle Group in early 2003."

MIDS will be carried both shipboard and airborne in a variety of platforms; the F/A-18 is the lead aircraft platform.