G.I. Combat Intro Movie
A new movie of G.I. Combat is now available, showing more from the 3D war game in the works at Freedom Games. Running for one minute, this clip features the intro trailer from the game. Download

Battlefield 1942 Game Trailer
A new movie of Battlefield 1942 has been released, showing more from the vehicular 3D action game that is being developed at Digital Illusions. This clip features a bit over a minute of combat gameplay sequences (including a few bits familiar from the E3 trailer). Download

Iron Storm Movie
There is a new movie of Iron Storm, showing the first- and third-person shooter by 4X Studio in motion. The movie features two minutes of action-packed gameplay sequences. Download

World War II Online Patch Released
Cornered Rat Software has released a major patch for World War II Online, the massively multiplayer online war simulation game published last summer by Strategy First and Playnet. The patch, released on the one-year anniversary of the game's launch, upgrades the game to version 1.6 and makes a number of additions and improvements, including a new interface, new models and animations, new sounds, a moon, and new night lighting. It also adds improved artificial intelligence, as well as new vehicles and guns, and fixes a number of bugs. According to Playnet, the new patch is the most significant upgrade for World War II Online since the game's launch.

Military News Kuwait asks US for AMRAAMs
The US Defense Security Co-operation Agency has notified Congress of a possible Foreign Military Sale to Kuwait of AIM 120C AMRAAM air-to-air missiles and associated equipment and services. 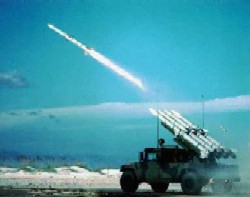 The pilot ejected safely and was recovered by a U.S. Navy helicopter shortly after the incident. The pilot suffered minor injuries and is being treated at base medical.

All Tomcats will remain grounded until investigators check a key strut in each plane's nose wheel assembly -- specifically, the outer NLG cylinder, which was the apparent cause of a March 2, 2002, F-14 training accident in the Mediterranean which killed the pilot, Lt. Cmdr. Christopher Blaschum. 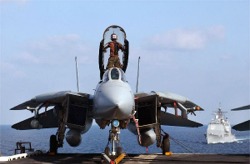 An engineering investigation of the mishap discovered corrosion on the outer cylinder at the site where the failure occurred.

Any F-14 aircraft NLG cylinder strut found to have corrosion pits greater than .005 inches deep will be prohibited from carrier launch until the nose landing gear strut is replaced.

Aircraft with corrosion pits less than .005 inches deep will be placed on a recurring 50 catapult inspection requirement to make certain the corrosion does not exceed acceptable levels. Inspection procedures are estimated to require 15 man-hours per aircraft.

Naval Air Systems Command (NAVAIR) is working with the type commanders (TYCOMs) to minimize the impact on deployed squadrons, and with the parts supplier, BF Goodrich, to assure a supply of replacement parts to meet the fleet needs as quickly and efficiently as possible.

The Navy expects to have all F-14s inspected within two weeks.