"Sikorsky's rotorcraft design, development and manufacturing capabilities are great assets to the team," said Paul Martin, Sikorsky's senior vice president, Government and Advanced Development Programs. "Together with Raytheon, this team has the capability and experience to produce UCAR system concepts within the demanding cost, schedule, and technology constraints of the program."

"Raytheon is proud to be providing next generation technologies and systems for the UCAR, a principal component of the Army's Objective Force," said Jack Pearson, vice president and general manager of Raytheon's Air Combat and Strike Systems business unit. "Our extensive experience in UAV sensors, coupled with our ongoing participation with DARPA in the development of the communication architectures the Army Objective Force, will ensure that our team's UCAR system-of-system concepts meet both emerging standards and the customer's requirements."

The IAAPS program, which is an Army Science and Technology Objective, has successfully demonstrated an integrated survivability system on a ground combat vehicle, which is designed to increase vehicle survivability while allowing for a decrease in armor and, therefore, vehicle weight.

The integrated suite has successfully conducted multiple demonstrations of end-to-end system performance, including: detection, classification, and selection of the appropriate countermeasure; tracking and computation of the fire control solution; and defeat by electronic warfare soft kill or active protection hard kill. The suite has successfully demonstrated defeat of two live threats fired at a single vehicle at the same time without the use of armor as the primary means of defeat. The next phase in demonstrating IAAPS capabilities involves defeating incoming threats while on the move. 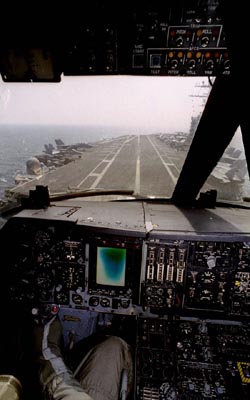 There were a lot of new people assigned to V-1 during this sea period who had the opportunity to see some flight operations take place from "Vultures Row." But soon the new V-1 crew won't be just watching flight operations -- they will be conducting them. "By the time the six-month cruise rolls around, air department will be the best in the fleet," said Stroman, who was recently selected to be commissioned as an ensign.

V-2 division maintains and operates all of the catapult launching and arresting gear. During the last at sea period, V-2 underwent long hours of arduous work to complete their flight deck qualifications for each Sailor in their division.

"V-2 division personnel, individually and as a team, have performed superbly, impressing the AIRPAC handling team with their knowledge, dedication and proficiency at launching and recovering aircraft," said Lt. Cmdr. Donald Eby, V-2 division officer. "The men and women of V-2 division are the most professional and hard working Sailors that I know."

According to Eby, V-2 is expecting to have an extra catapult and arresting gear crew qualified before Nimitz' six-month deployment.

"Last underway went really well," said Aviation Boatswain Mate Senior Chief Eric Conners, V-3 leading chief petty officer. "We were able to qualify a lot of people. We also received our certification from COMNAVAIRPAC, which is an annual thing that indicates that we know how to move aircraft safely and shows that we are proficient when it comes to putting out aircraft fires."

V-3 division has about 80 people and is responsible for moving aircraft in the hangar bay.

Conners feels that V-3 personnel will have completed their qualifications and the division will be completely manned by the time Nimitz deploys. "We want to be able to support the flight deck by taking in any aircraft that is damaged or not flying, to allow the flight deck room so that they can launch and recover other workable aircraft," he said.

V-4, another division in air department, was also praised by their division officer, Lt. Cmdr. Herbert W. Carlock III, for their hard work and effort during this past underway period. "Humans are very smart," said Carlock. "Most of them catch on pretty quick. V-4 personnel work in this fashion. Things went a lot better this year than a year ago."

Carlock also felt the equipment had a great impact on the production during this past underway. "The equipment works a lot better," said Carlock. "The crew is better trained and ship is in better material condition."

"My goal for next underway is that we increase the qualified training on the ship," said Carlock, "and that the personnel from my division get more hands-on training. I would also like for everyone who is able, to have their Enlisted Aviation Warfare Specialist (EAWS) pins and to be a pay grade above where the are now."

Carlock's main concern is making sure that each individual with a particular job is authorized and knows how to do specific tasks. "We have about 50-60 people who work on the flight deck; fueling aircraft, defueling aircraft and repairing fuel stations," said Carlock, "And so far, we have not spilled one drop of fuel. We would like to keep that record going."

V-5 division, consisting of approximately 15 Sailors, handles primary flight control. This division works with the air boss and keeps track of all of the aircraft.

"Our personnel did very well this underway," stated Thomas. "By our six-month deployment, we plan on having most of our personnel fully qualified to perform their tasks."

Aviation Boatswain Mate 3rd Class Joshua Daunhauer, tower supervisor, agreed with Thomas. "Our first day of flying was pretty stressful," stated Daunhauer. "But we did pretty good, even with all of the new people on board."

Each division set a goal and accomplished it by the end of Nimitz' first sea trial period. However, this current underway will allow for even more improvement and present even higher goals to meet. (Source: USS Nimitz Public Affairs)

Coalition aircraft have been enforcing the northern no-fly zone for more than 10 years. Since Dec. 28, 1998, Iraqi President Saddam Hussein has opted to challenge this enforcement by having his forces fire at coalition aircraft using surface-to-air missiles and anti-aircraft artillery, and by targeting them with radar. ONW aircraft here respond in self-defense to these threats, while continuing to enforce the no-fly zone.

The agreement commits Denmark to put $125 million toward the program. The commitment goes through 2012 and does not commit Denmark to buying the aircraft. The United Kingdom and Canada are the other two countries already aboard as partners.

Aldridge said the Joint Strike Fighter "is yet another example of our cooperative relationship across many different programs and projects." 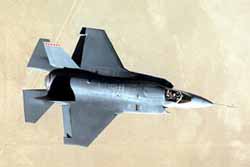 Hansen-Nord said the signing of the memorandum is more than just a development partnership. "It is also an evidence of our strategic relationship and of the excellent relations between our two countries," he said. "We have stood shoulder-by-shoulder during the Cold War, through the challenging 1990s and, since Sept. 11, we have again joined forces in Operation Enduring Freedom and in the fight against terrorism.

Participation in the program gives the Danish military a say in how the aircraft is designed and built. It also will provide opportunities for Danish industry to partner with the U.S. aviation industry in building the craft. Denmark has been part of the JSF program since 1997.

Lockheed-Martin is building the aircraft, dubbed the F-35. The company has partnered with Northrop Grumman and BAE Systems in the endeavor. In the United States the JSF would replace Air Force F-16s and A-10s and Navy and Marine Corps F-18s and AV-8Bs.

The JSF is a stealthy aircraft that will come in three versions: a conventional takeoff and landing version, a short takeoff/vertical landing version and a carrier version.