PC News Free WarBirds III Memorial Day
On Memorial Day weekend (May 24-27, 2002)iEntertainment will convert the Air Combat Arena into a FREE WEEKEND arena in WarBirds III. All youll need is a free iEntertainment Network account to login. During this event iEN staff will randomly award prizes like T-shirts, video cards and Joysticks. For more details or to sign-up click here.

New Screens: Rainbow Six - Raven Shield
We have 8 new screens from Rainbow Six: Raven Shield, the latest in squad-based tactical shooter series. Developed by Ubi Soft's Montreal studio, in close collaboration with Red Storm Entertainment, Rainbow Six: Raven Shield features a brand new Tom Clancy storyline in which Team RAINBOW is led all over the world in a string of dramatic operations. The game will utilize graphics technology provided by the next-generation Unreal engine to power 15 new single-player missions that include the discovery of a cache of biological weapons and stopping an armed gang from terrorizing a London bank.

Sum of All Fears Trailers
Red Storm Entertainment has released a movie and game trailer of The Sum of All Fears, its squad-based tactical shooter based on the Tom Clancy novel. The movie runs for more than two minutes, including a minute and a half of gameplay action. Movie Trailer -- Game Trailer

Parhelia-512 is an 80 million transistor, 0.15µ, 2D, 3D and DVD/video GPU with a true 256-bit DDR memory interface providing over 20 gigabytes per second (GB/s) of raw memory bandwidth. This AGP device supports unified frame buffers up to 256MB in size and integrates two RAMDACs, a TV encoder and support for dual TMDS transmitters. Designed to surpass the expectations of the most demanding professional users and PC enthusiasts, Parhelia-512 has three major goals: to dramatically increase the quality of all aspects of visualization, to sustain extremely high performance for the most complex and demanding graphics rendering and to deliver a number of innovative and substantive features.

The Chinook, serial number 8002, is one of two EMD prototypes manufactured for the Army's CH-47F Modernization Program. Boeing has utilized the two aircraft, both of which began flight and system validation testing in 2001, for maintainability validation and aircrew training. Aircraft 8002 is scheduled to begin test flights in the Army's Lead the Fleet program at Fort Rucker, Ala., after the AAAA convention. This program will collect the data necessary to validate the operations and support cost reductions resulting from the F-model improvements. 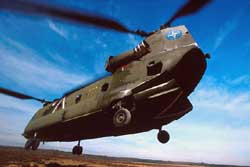 The Army plans to upgrade 300 of its 432 CH-47Ds to the F-model configuration, which will keep Chinooks in the Army rotary wing fleet at least through the mid-2030s. Additional upgrades also are planned for Special Operations Chinooks in service with U.S. Army Special Forces units.

The first contract, in the amount of $39.7 million, is for production of 10 RAM Guided Missile Launching Systems and supporting equipment for the German Navy. This procurement will be part of the ship self-defense package for Germany's new Korvette class of ships. 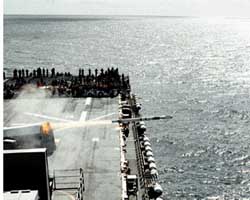 The second contract, in the amount of $35.7 million, is for the delivery of 90 RAM Mk44 Mod 2 Guided Missile Round Packs and spares to the U.S. Navy. The contract is the Navy's fifth production installment of the RAM Block 1 configuration and the seventh procurement of the upgraded RAM fuze. The contract also includes funding for production of three test missiles each for Germany and Korea.

RAM is a lightweight, quick reaction, high-firepower missile system designed to provide anti-ship missile defense. The Mk49 Mod 3 Guided Missile Launching System includes a 21-round launcher and below-deck electronics and incorporates the ability to counter a new set of air and surface threats. RAM is co-developed and co-produced under a NATO cooperative program between the United States and German governments.

XM777 Begins Operational Assessment
Gun crews from both the US Marine Corps and US Army have begun Operational Assessment (OA) of the BAE SYSTEMS XM777 Lightweight 155mm Howitzer. Three prototype howitzers will be tested during OA, which will be conducted at 29 Palms in California, and is expected to run for approximately six weeks. OA is a critical step in securing approval for a low rate initial production (LRIP), expected in October 2002.

BAE SYSTEMS recently completed initial training for both US Marine Corps and US Army crews on the XM777, a prerequisite for OA. During the three day battery training phase more than a thousand rounds were fired, and numerous emplacements, displacements and movements were tested. The timelines for key operational requirements were routinely met by the gun crews during the exercises. The rate of fire exercise demonstrated that both Marine Corps and Army crews could exceed the crew-drill maximum and sustained rates of fire per minute. All charges including the top zone 8 charge were fired. The testing was completed with no significant problems or mechanical failures experienced by the prototype howitzers. 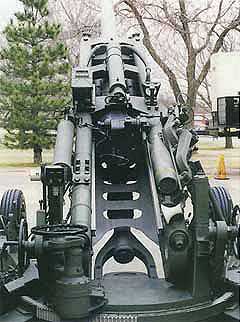 According to US Marine Corps Colonel John M. Garner, Joint Programme Manager for the XM777, the howitzers and the gun crews are ready for OA. "I have commanded an M198 battalion and regiment in the past, and during the training, these four crews -- two Marine Corps and two Army -- would have shot rings around any M198 unit I have ever observed, using the XM777 howitzer."

The XM777 was designed and developed by BAE SYSTEMS RO Defence. As prime contractor, BAE SYSTEMS is developing a US production base in anticipation of the LRIP decision, with at least 70% of the gun manufactured in the US. The Marine Corps will be receiving 380 units beginning in May 2004, the Army, 273 guns beginning in May 2006. Final assembly and delivery of the howitzers will be completed from manufacturing facilities in Hattiesburg, Mississippi.

The XM777 howitzer is replacing the ageing M198 howitzers in the US Marine Corps and US Army. The XM777EI, which incorporates digital fire control, will be the standard howitzer in the US Army's Brigade Combat Teams. The XM777 is 45% lighter than the M198 and is more strategically deployable and tactically manoeuvrable than the M198. The XM777 can be transported by the USMC MV-22 tilt-rotor aircraft.