Battlefield 1942 Site Launched
Electronic Arts has launched a new official Web site for Battlefield 1942, its upcoming World War II team-based action game. The site contains an overview of the game's story and features, details about some of the game's units, and a gallery of screenshots.

The game will let players engage in combat at a variety of famous World War II battle sites in both single- and multiplayer modes. Battles will be set in 16 locations such as Omaha Beach, Guadalcanal, Stalingrad, and Wake Island. Players will choose from five different character classes, and they will control more than 35 Axis and Allied land, sea, and air vehicles. The game's multiplayer mode will support up to 64 players on some maps, and some vehicles will let multiple players cooperate, such as the B-17 with a pilot/bombardier station and two separate gunner positions. The single-player mode will let players compete against unscripted computer-controlled opponents. Release Date: Summer 2002. -New Screenshots

Xbox Creators Start Game Development Company
(Source: Reuters) Two of the creators of Microsoft's Xbox have joined a pair of video-game industry veterans to launch a venture with a familiar Hollywood feel: find raw talent, create edgy entertainment, and then sign with a major publisher to sell it to the world.

But the product for Capital Entertainment Group is not movies, but video games, and the startup is in the process of raising $50 million in venture backing for just that purpose.

CEG will back the development with money and production resources and find game publishers to market and distribute the resulting games, very much like an independent movie studio.

The game startup plans to make its money by taking a cut of net game sales. The company believes its investors can break-even on a game after sales of 250,000 copies. Developers will get a royalty, assuming a "breakpoint" is achieved within the first 12 months of sales, equal to anywhere between 5 percent and 15 percent of net sales.

The new venture comes at a time when the video game industry is in the first year what most expect to be a cycle of unprecedented growth. The top three U.S. game publishers recorded sales of $714.3 million in the first quarter of this year, up 45 percent from a year earlier.

Investors, analysts and even major media companies have started to pay closer attention to big-name game publishers, as they produce stock gains and quarterly returns far better than those coming from other technology or media companies. [More...]

Under a $12 million Navy contract, the Navigation Systems Division will supply 78 of its LN-92 inertial navigation units and mounts for the U.S. Navy's F/A-18E/F, E-2C, AV-8B aircraft and for the approach landing system of aircraft carriers. The self-contained LN-92 provides pilots with aircraft position, velocity, acceleration, heading and attitude information.

This contract will also be used to supply foreign governments with LN-92 units for installation in aircraft such as the E-2C. The Navigation Systems Division has been the premier supplier of U.S. Navy carrier aircraft inertial navigation systems through four generations of technology and for more than four decades.

"Our customers continue to be pleased with the performance of the LN-92," said Louis Patalano, program manager of Military Aircraft Electronic Systems at Northrop Grumman. "The mean-time-between failure of over 15,000 hours exceeds current contract requirements and demonstrates the high reliability of the LN-92."

In full-rate production for the German Army by GIWS since 1998, SMArt 155 is an advanced "fire and forget" smart projectile for use in all 155mm artillery systems that employs a millimetre wave radar, radiometer, and an infrared sensor designed to defeat artillery and armoured targets in all weather and environmental conditions. It is the only gun-fired multi-sensor smart munition system currently in production in the world. 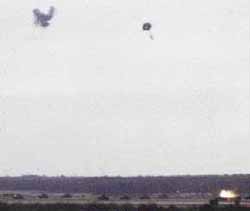 Of the 15 SMArt 155 PI submunitions delivered over the target array during the test conducted last month by the German government, the system achieved seven hits, eight near misses, and 100-percent reliability, marking the successful completion of the first PI production lot and clearing the way for delivery of the improved munition into service with the German Army.

GIWS has delivered more than 3,000 SMArt projectiles to the German artillery forces under a contract that calls for total production of 9,000 projectiles over the next several years.

Under an exclusive agreement signed by the two companies in 2000, GIWS will transfer the technology for SMArt 155 to ATK, which will be the prime contractor for the manufacture of the projectiles, submunitions, and other components, and will market and manufacture the product in the US. The programme is one of a number of precision-guided munition systems organised in ATK's newly formed Precision Systems Group.

"We believe the SMArt 155 PI and the SMArt submunition are the best and most affordable systems available to meet the US Army's requirement for gun-fired smart munitions," said Mark Conrad, ATK precision munitions director. "It is the only true tri-mode sensor 155mm smart munition in either development or production anywhere in the world. This gives it a level of effectiveness and performance that far exceeds other less capable, or single mode, sensor systems that employ IR only based sensor suites."

"Today marks a major test accomplishment," said Lt. Col. Arnie Bunch, Global Power Bomber CTF director. "The team demonstrated conventional weapons flexibility without any glitches. As we add precision weapons to the mix, the B-1 warfighter should have unmatched strike capability long into the future."

"This release accomplished what would typically require three aircraft passes or coordinated strike of three aircraft," Bunch said. "Using this new capability, the Air Force will be able to dramatically decrease the number of assets put in harms way during future aircraft attacks."

"This demonstrated weapons flexibility is a giant step forward in the B-1s overall conventional mission upgrade program," said Col. Mike Miller, B-1 system program director at the Aeronautical Systems Center here. "It puts the B-1 closer to fulfilling its role as the backbone of the bomber fleet as envisioned by the USAF Bomber Roadmap. The next critical step in this maturation is successful completion of the defensive system upgrade program, now in the early phase of testing."

In 2003, testing will begin to integrate the Joint Standoff Weapon and Joint Air-to-Surface Standoff Missile. At the same time, new upgraded computer systems will be installed.

Navy Identifies Missing Aircraft Personnel
Navy officials have released the names of the personnel who were reported missing yesterday in the mishap, involving two T-39 Sabreliner aircraft, that occurred over the Gulf of Mexico approximately 40 miles south of Pensacola. 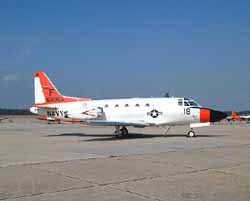 The personnel have been identified as:

Raytheon Aerospace LLC Corporation has identified the two civilian contractor employees who were piloting both aircraft as Homer Hutchinson III, of Pensacola, and Marshall Herr, of Pace, Fla.

Both aircraft, assigned to Training Squadron EIGHT SIX onboard Training Air Wing SIX, were on a routine training mission when radar contact was lost at approximately 3:30 p.m. (local) yesterday. U.S. Coast Guard cutters Stingray and Bonita, and vessels from Naval Air Station (NAS) Pensacola are at the scene, and the recovery effort is ongoing.

The T-39 Sabreliner aircraft is used to train student naval flight officers at NAS Pensacola, who specialize in areas such as navigation, electronic countermeasures, tactical systems, and radar intercept.

An investigation is underway to determine the cause of the mishap.

FBI Spy Hanssen Sentenced to Life in Prison
(Source: Reuters) - An apologetic Robert Hanssen, the disgraced former FBI agent considered one of the most damaging spies in U.S. history, was sentenced on Friday to life in prison for selling secrets to Moscow.

Hanssen, who pleaded guilty last year to disclosing some of the nation's most sensitive secrets for $1.4 million in cash and diamonds, apologized for his behavior and said, "I am shamed by it."

Hanssen avoided the death penalty after reaching an agreement with government prosecutors in which he promised to cooperate fully with investigators on his espionage, which spanned more than two decades and caused the death of at least two agents in Russia. [More...]