New Screens: Battlefield 1942
COMBATSIM has just received a load of new screenshots from Digital Illusions upcoming title Battlefield 1942. Set in WWII players can storm the beaches of Normandy, direct artillery at Kursk, pilot a fighter at Midway, shell an airstrip at Gaudalcanal, and command a tank in Tobruk. Battlefield 1942 is multiplayer-focused with support for up to 64 players, there will be a mode for single player action. Playing as an infantry officer, gamers will be able to operate many weapons of war available to the Axis and Allies as well as command numerous land vehicles, ships and aircraft. With larger craft such as a bomber or battleship, the game will allow players to choose what stations they will serve - pilot, gunner, captain, bombardier, etc. Release Scheduled for Fall 2002.

Prisoner of War Movie
Codemasters has released a movie of Prisoner of War, showing the third-person stealthy action adventure by Wide Games in motion. The movie sports a minute of high-resolution gameplay footage from various areas in the game. Download Movie

Northrop Grumman's Ship Systems sector will lead the system design, engineering prototype development and testing of the DD(X) System under a $265 million contract awarded today by the Navy. The team includes Raytheon Company as mission systems integrator and more than 30 of the nation's top engineering and maritime industrial companies. The initial design contract has a total value of approximately $2.9 billion over four years.

"We are very pleased and proud that our DD(X) Gold Team was selected by the Navy. This revolutionary program reinforces our strategy, begun more than a decade ago, of repositioning Northrop Grumman for the changing nature of military conflicts. This is a very important win for our company and we look forward to working with Raytheon and our other team members to complete this initial phase of the program," said Kent Kresa, Northrop Grumman chairman and chief executive officer. "The DD(X) is the centerpiece of the Navy's 21st century transformation and is the cornerstone program for a family of surface combatants to be designed and built over the next 25 years. I am extremely proud of our employees at Northrop Grumman Ship Systems for leading this effort as well as our other operating sectors and outstanding teammates who contributed to the success of the Gold Team's proposal."

This family of ships includes destroyers, cruisers and littoral combat ships, as well as technology to be backfitted into today's existing fleet of Aegis-equipped cruisers and destroyers.

"Our team's proposal included a bold approach to the development of the very best ship design and propulsion technologies the country has to offer in fielding the next generation of surface combatants," said Dr. Philip A. Dur, corporate vice president and president of Northrop Grumman Ship Systems. "Northrop Grumman has delivered 70 advanced cruisers and destroyers to the Navy's surface fleet since 1975. Our vast experience in shipbuilding, coupled with our expertise in next-generation technologies, will result in a forward-looking approach to the design and testing of ship systems for the DD(X). Together with Raytheon's information technology, sensors and combat systems, our team will deliver the most capable, most survivable family of ships ever produced."

This phase of the program will initially employ more than 350 Northrop Grumman Ship Systems management, engineering, operations and logistical support personnel over the next four years.

First Upgraded U-2 Arrives At Beale
Imagine reaching for something in the backseat or practicing yoga to operate the radio at an altitude of 60,000 feet. That's how Maj. Walt Flint, the 9th Operations Groups chief of standardization and evaluation, described working with some of the controls and displays in the current U-2 cockpit. That will soon change.

The first U-2S upgraded through the Reconnaissance Avionics Maintainability Program returned to the 9th Reconnaissance Wing here April 16. The RAMP upgrade replaces the 1960s-vintage cockpit with equipment including three 6-by-8 inch multifunction displays, an up-front control and display unit, and an independent secondary flight display system. The entire fleet of 31 U-2S aircraft and four two-cockpit trainers will be modified by 2007. Lockheed Martin Aeronautics Company has the contract. The modernized cockpit improves the war-fighting capabilities of U-2 pilots. 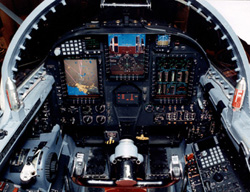 "With this first RAMP delivery, the U-2 pilot now has superior situational awareness and improved survivability," said Lt. Col. Mike Masucci, the U-2 flight test commander. "This increases (information) collection efficiency, which leads directly to more bombs on target and reduced risk to friendly forces."

U-2 pilots will notice a greatly improved ergonomic landscape in the cockpit, said Col. Alan Vogel, the 9th OG commander.

"The old cockpit layout features navigational equipment low to the right of the pilot with communications equipment located low to the left," Vogel said. "Operating that equipment adds physical demands to an aircraft which already tests a pilot's endurance on a lengthy flight. The new displays and controls will help a pilot focus and concentrate on the aircraft and mission requirements."

To gain a better appreciation for the workload a U-2 pilot faces in flight, consider the maneuvers a pilot takes when flying the old-style U-2 cockpit. Pilots wear a cumbersome full-pressure suit and helmet.

"The helmet is fairly light, but it doesn't turn all the way with your head to turn it from side to side, said Lt. Col. Garry Baccus, the 9th Operations Support Squadron commander. Because the navigation and communication systems controls were mounted down low, to see them you physically had to grab the metal bar -- the bailer bar -- that locks the helmet faceplate, and use it for leverage to turn the helmet to see and operate these controls."

Although the improvements don't actually improve the flight characteristics of the aircraft, they do translate to improved flight safety.

While the base awaits the arrival of more RAMP aircraft, many pilots and maintainers have spent time in the RAMP cockpit procedures trainer becoming familiar with the new cockpit, said Brent Thompson, the Lockheed Martin Aeronautics field services engineer. Formal upgrade training for the pilots should begin in early May, Thompson said.

The RAMP contract was awarded in October 1998 and calls for six aircraft to be modified each year.

U.S. Air Force Begins Training Over TRW-Developed Network of Simulators
The U.S. Air Force has successfully completed its first training missions over the Distributed Mission Training (DMT) network, an architecture developed by TRW Inc. (NYSE: TRW) that ties together high resolution flight simulators over a high- speed fiber-optic network. Through this network, pilots and reconnaissance operators at Air Force bases hundreds of miles apart are now able to rehearse missions together in a computer-generated environment.

"While many events have been conducted over the network to date, these were the first formal training missions with actual pilots and aircrew in the seats," said Dr. Mike Papay, TRW's DMT program manager. "All three stages of the training -- briefing, mission execution, and debriefing -- went smoothly, and we received some outstanding feedback from the pilots."

For the next phase of network expansion, TRW will integrate four Lockheed Martin F-16 simulators and four threat stations at the mission training center currently under development at Shaw Air Force Base in South Carolina. Integration of these simulators into the DMT network is scheduled for completion later this year.

TRW has been using prototype connections to establish the simulators' potential for adaptation to the DMT network and to conduct brief test and evaluation exercises to verify platform interoperability.

Networking of these simulators would allow their operators to train together to improve their battle management skills by conducting exercises against highly mobile, time critical targets (TCTs). Strikes on TCTs require a concerted effort in which the target must be located and tracked (JSTARS and Rivet Joint), targeted (AWACS), engaged and destroyed (F-16) then confirmed and assessed.

Real-time, secure transfer of simulator data over the DMT network is accomplished by employing a combination of technologies including encryption, switched virtual circuits, and ATM (asynchronous transfer mode), which minimizes the delay time, or latency, for data transferred between simulators. Minimizing latency allows maneuvers made by the pilots, such as a sudden turn or a barrel roll, to be immediately displayed on another simulator hundreds of miles away, thereby providing a more realistic training environment and ensuring a "fair fight" among all participants.