PC News IL-2 Dedicated Server Test
On Tuesday, April 23rd, Ubi Soft will be launching two new dedicated servers for IL-2 Sturmovik on the Ubi.com game service. The features of the servers are as follows :

Strategic Command Announced
Battlefront.com and developer Fury Software are proud to announce Strategic Command  European Theater, a turn-based Grand Strategy wargame featuring the Second World War in Europe. As the supreme commander of the Axis or Allied forces, the player shapes the fates of the nations at war. Political options, research and upgrade of equipment, management of supply and resources and the strategic employment of one's armed forces are some of the keys to success. Strategic Command has officially entered Beta status, and is scheduled for release this summer.

Starting in 1939, there are 6 major scenarios which cover each year up until 1944  "Fall Weiss", "Fall Gelb", "Barbarossa", "Fall Blau", "Zitadelle", "Overlord". Game play is turn based with each turn lasting from 2 weeks to 1 month depending on the season. Designed for replayability and realism, options include fog of war, Free French forces, Partisans, scorched earth, thoroughly implemented features for sea transport, amphibious assaults, strategic bombing, industrial production, research and development, declarations of war, historical and random nation neutrality and allegiances as well as other political mechanisms.

Military News Republic of Korea Selects F-15K for F-X Fighter
The worst kept secret in Asia has finally seen the light of today as the recipient of South Korea's $4 billion F-X fighter contract was revealed to be Boeing's F-15K. Despite a seemingly endless stream of complaints and accusations about the way the selection process has been handled and the fairness of the competition, Korea has, as everyone expected, picked the US aircraft over the other finalist Dassault's Rafale.

South Korea will buy 40 F-15Ks from Boeing under the deal. Discussions will continue over the final cost of the planes, currently at $4.4 billion and potential work for Korean firms under the contract. The award means that Boeing can retain its F-15 production line in St. Louis and represents a much-needed boost for the company having lost out to arch rivals Lockheed Martin on the Joint Strike Fighter. 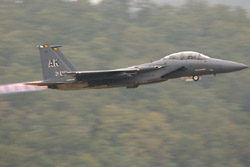 French company Dassault has expressed its disappointment over the decision and have reiterated their plans to have the award over turned and the procedure reviewed. Dassault claim that the selection process was weighted in favour of the US manufacturer and have already applied for a court injunction. A decision is expected in the next few weeks.

Vice Defence Minister Kwon Young-Hyo said the F-15K was considered "excellent" in all three categories while Rafale was only "good" for national security and overseas markets. He said there was "no objection, no hot debate" when the final decision was made at a meeting Thursday of defence, military, trade and foreign affairs officials. President Kim Dae-Jung must still approve the order but that is considered a formality. The F-15K will replace South Korea's current fleet of F-4 and F-5 jets by 2009.

"I want to commend the ministry of national defence and the Republic of Korea (ROK) air force for running a rigorous, fair and transparent competition. This has been one of the most honourable and tough evaluations in which we have ever participated," said Jerry Daniels, the president of Boeing Military Aircraft and Missile Systems.

In the new combined team approach, TRW subcontractor Spectrum Astro will develop spacecraft while Raytheon and Northrop Grumman will develop sensor payloads under competitive subcontracts to TRW. Prior to restructuring, TRW, with Raytheon as a principal team member, and Spectrum Astro, with Northrop Grumman, led competing teams to define requirements and complete conceptual designs for an operational SBIRS Low system. 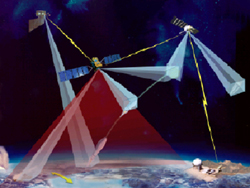 "This combined team offers a compelling, evolutionary approach to lowering technology risk for the programme by combining the best and the brightest from both previous teams," said Tim Hannemann, member of TRW's Chief Executive Office. "At the same time, the team preserves competition in developing the critical sensor elements of the satellite payload, ensuring that the best technology prevails."

The Missile Defense Agency's budget requests for SBIRS Low total $3.63 billion for fiscal years 2003 through 2007, although the programme will continue beyond that five-year funding horizon. Programme plans call for launch of the first SBIRS Low satellites (Block 06) in 2006-2007, to be followed by launches of upgraded satellites in subsequent blocks.

SBIRS Low is part of the United States' missile defence system, designed to provide end-to-end infrared tracking of missiles throughout their trajectories. The capabilities-based acquisition approach will allow the SBIRS Low programme to focus on early development and deployment of missile tracking satellites, while system capability can evolve as technology advances.

Friends: Milan Pilot Was on Detour to Save Fuel Tax
(Reuters) - The pilot who crashed into a Milan skyscraper Thursday, killing himself and two others, had been making a detour from Switzerland to Italy to save fuel taxes, friends and fellow pilots said Friday.

Luigi Fasulo, 67, had taken off from the southern Swiss town of Locarno for Milan, some 30 minutes away by plane, and had planned to return almost immediately to Lugano, another town in Italian-speaking southern Switzerland.

Pilots said they regularly made such short jaunts to Italy after filling up their tanks in Switzerland. By flying across the border they can claim to have exported the fuel and reclaim the fuel taxes from Swiss customs authorities when they return. [More...]