New Sudden Strike 2 Tunnel Feature Exposed
One of the special features of the highly anticipated RTS sequel Sudden Strike 2, which has remained hidden so far, is the tunnels. Via a network of underground routes you can covertly cover long distances on a map and surprise your enemy.

CDV shows some screens illustrating troops as they enter into a tunnel. The infantry cunningly enters these secret passages only to reappear behind the adversaries men moments later. However, not only persons may be sent underground but entire vehicles, as well.

World War II: Frontline Command Details
World War II: Frontline Command, developed by The Bitmap Brothers, is a squad-based action real time strategy game that captures the heroism of World War II's most significant battles. As a commander of Allied forces in Europe in the last year of World War II, players enter into combat with the Axis forces and drive the enemy back deep inside its own territory. With a full range of authentic troops and equipment at your disposal, become a master of the battlefield to ensure final victory. Screens

The 105mm MRM projectile is designed to defeat main battle tanks equipped with explosively reactive armor and active protection systems. It is among the first in a line of precision munitions being developed for the U.S. Army's Future Combat System, a key element in the service's transformation to a more lethal and rapidly deployed fighting force.

The 105mm MRM will incorporate technologies developed for the Tank Extended Range Munition-Kinetic Energy (TERM-KE), a gun-launched, precision-guided munition that is compatible with 105mm and 120mm gun systems.

During the next 15 months, the MRM program will focus on technology demonstrations of the munition's seeker/guidance and control system, rocket motor propulsion, airframe system, lethal mechanism, and gun propulsion system.

Thales Announces Future Carrier Shipbuilding Strategy
Thales CVF team has announced its strategy for the shipbuilding phase of the UK MoD's future carrier programme, which foresees two new 50,000 tonne aircraft carriers that will each operate up to 50 aircraft by 2015.

The Thales team intends to build the carriers in five separate sections called SUPERBLOCKS, each individually larger than a Type 45 Destroyer. Each is designed to be as self contained as possible, and contiguous with the ship's damage control sections in order to minimise interconnections. Each SUPERBLOCK will be fully outfitted. A 'virtual ship' will be created that can be hooked-up to its adjacent partners to form the complete ship within a couple of months in dry-dock. This process will be co-ordinated by the Thales team member Halliburton KBR. 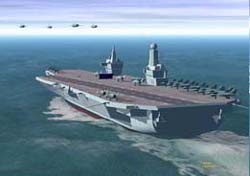 The Thales team has carried out extensive studies to show the best way to provide the necessary facilities and resources to design and build these two large ships, along with guaranteeing the delivery dates of 2012 and 2015 required by MoD.

Thales' approach actively engages the entire UK shipbuilding industry to ensure the widest possible access through open competition. Thales expects the shipyards will optimise their chances of winning contracts by competing for SUPERBLOCKS that match their own facilities, competencies and cost structures.

Thales' baseline strategy plans include Swan Hunter of Newcastle, BAE SYSTEMS Marine in Glasgow, Harland and Wolff of Belfast and Vosper Thornycroft of Portsmouth in the building of the SUPERBLOCKs. To keep costs down each competing shipbuilder will provide the same segment for the two ships. The final work-up and commissioning is planned at Devonport Management Limited in Plymouth.

Chief Executive Officer of Thales Plc, Alex Dorrian commented: "Thales is adapting the expertise from Halliburton KBR's well proven commercial and offshore processes and applying it, for the first time, to the large scale construction of warships. The new skills and ship construction techniques incorporated into Thales team, will move naval ship construction into a new era, creating an efficient and capable industry that can compete in the world marketplace. "

Jaap Kroese, Chairman of Swan Hunter, said: "I am delighted to be contributing the expertise gained on the Alternative Landing Ship Logistics to the design and construction planning of the Thales team. Swan Hunter is investing in training, steel fabrication and dry dock facilities and will be well placed to win the equivalent of at least one ship. "

Welcoming today's announcement, Harland and Wolff Sales Director, Brian McGrath said: "Harland and Wolff is delighted to join with Thales and the other team members to offer a shipbuilding strategy that will bring benefits to many areas of the United Kingdom. We look forward to playing a full role in the Thales' team baseline strategy for both the design and assembly of these unique vessels. "

Thales says the design and build solution will be 100 per cent UK based and principal team members are Devonport Management Limited, Halliburton KBR, Lockheed Martin, Harland and Wolff, Swan Hunter, BMT, Alstom and Raytheon along with a number of specialist subcontractors.

BAE Systems Missile Warning System In Live Fire Test
BAE SYSTEMS Common Missile Warning System (CMWS) has demonstrated, in a series of live-fire tests, that it can successfully help defend tactical fighters against infrared missile threats. The system - which detects the signature of a launched missile, warns the aircrew and cues countermeasures to defeat the threat missile - was tested aboard a US Air Force QF-4 drone in flights at White Sands Missile Range, New Mexico, March 11-13, 2002.

Configured similarly to the way it might operate on an F-16 tactical fighter, the sensor suite was flown against a total of eight man-portable air defense (MANPAD) surface-to-air missiles. The missiles were launched at the QF-4 from various distances and angles. Initial reports indicate that the CMWS performed successfully in every test.

CMWS is designed for various fixed and rotary wing aircraft. CMWS is the missile warning portion of the Advanced Threat Infrared Countermeasure (ATIRCM) system. ATIRCM has completed Engineering and Manufacturing Development and is transitioning into production for various US aircraft.

The CMWS (designated the AN/AAR-57) is a passive missile detection and warning system. It consists of up to six electro-optic missile sensors, depending on aircraft type, and an Electronic Control Unit (ECU). The sensors are installed around the aircraft to provide comprehensive coverage, and constantly monitor for the signature of a missile. The ECU processes the sensor data and, if it detects an incoming missile, provides cues to the ATIRCM or other defensive equipment to engage in countermeasures to defeat the threat missile.

The US Army has awarded BAE SYSTEMS IEWS a $12.7 million contract for production of 26 CMWS sets. Work will be performed in Nashua, New Hampshire, and is to be completed by Sept. 30, 2003.

Equipped with a telemetry-system, the first IPA standard aircraft will be used for in-flight test, recording and transmitting every manoeuvre and thousands of other technical parameters to the ground station for further evaluation. 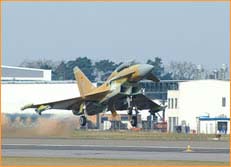 "Since Eurofighters first prototype's first flight here in Manching we all have gone through many single steps and a lot of effort in the whole programme to come up with todays positive results. IPA 3's successful Maiden-Flight marks an important milestone before delivery of the first standard aircraft start in the second half of 2002," said Aloysius Rauen, President and CEO of EADS Military Aircraft.

This flight follows the recent maiden flight of IPA 2 in Italy. The UK's first production aircraft, IPA 1, is expected to fly shortly.

Managed by the NATO agency NETMA, Europe's leading aerospace companies, EADS in Germany and Spain, Alenia Aeronautica/Finmeccanica in Italy, and BAE Systems in the UK, are partnered in the Eurofighter industrial consortium.

USS Cole Returning to the Fleet
USS Cole (DDG 67) is scheduled to depart from Pascagoula, Miss., and return to the fleet on April 19, after a successful 14-month repair effort following her arrival aboard the Norwegian heavy transport ship Blue Marlin on Dec. 13, 2000. 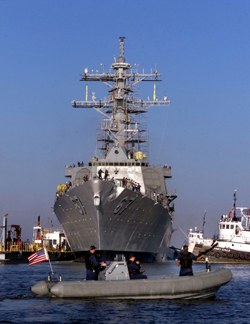 Northrop Grumman Ship Systems, Ingalls Operations, in coordination with the Navys Supervisor of Shipbuilding, Repair and Conversion (SUPSHIP) Pascagoula, recently completed repairs to the AEGIS destroyer, which included replacing more than 550 tons of steel on the exterior plating and major upgrades giving it more in common with the latest Arleigh Burke-class destroyers.

Upon its departure from Pascagoula, Cole will return to its homeport in Norfolk, Va.

Media representatives are invited to participate in an availability on April 18, and cover the Coles departure on April 19. Media wishing to participate should call the Navy/Northrop Grumman Ship Systems, Ingalls Operations Media Center in Pascagoula at (228) 769-4375 beginning Thursday, April 11, and no later than 4 p.m. local time, Tuesday, April 16, 2002.