Space Empires IV Gold Patch Released
Shrapnel Games has released the first Space Empires IV Gold patch. This patch, v1.67, adds features and enhancements and fixes bugs. Besides fixing a number of small bugs, the AI has been tweaked and some additional enhancements were added to TCP/IP play to make it easier to play. A complete list of additions and fixes can be found at Shrapnel Games

Cossacks II will feature six single-player campaigns with a total of 60 missions, 12 individual single-player scenarios, and 10 simulated historical battles. It will also include an extensive diplomacy system, extended formations and tactical orders, and a series of multiplayer modes. The game's 3D engine will include realistic projectile physics and will support up to 32,000 units per game. Cossacks II: Napoleonic Wars is scheduled for release in the second half of 2003. 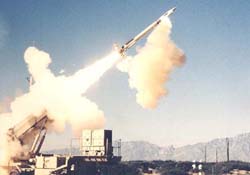 The REP III improvements double the average power of the Patriot radar, while the CDI-3 kits add a wideband capability to the radar for generating and processing high range and medium range resolution waveforms for target discrimination. "As the only combat proven air and missile defense system fielded today, Patriot must be upgraded to meet evolving threats," said Walter Putis, Raytheon vice president and Patriot program manager. "These improvements provide the system with increased surveillance, tracking, missile guidance and discrimination capabilities."

This latest award continues the upgrade modifications Raytheon is currently performing on the U.S. Army's Patriot radars. Work will be performed at Raytheon facilities in Andover, Bedford, Sudbury and Tewksbury, Mass. With headquarters in Lexington, Mass., Raytheon Company is a global technology leader in defense, government and commercial electronics, and business and special mission aircraft.

Electrified BDUs Definitely Aren't Your Father's Fatigues
Using a finger of his glove, a soldier determines if water is safe to drink. He takes a rolled- up cloth keyboard from his pocket, plugs it in and starts typing a message. Calling for support, his radio sends and receives signals using an antenna blended into his uniform.

Through a 1998 Small Business Innovative Research program known as Electro-Optic Fabric Concepts for Combat Clothing, researchers at the Army Soldier Systems Center here are developing textiles that can transport power and data safely and efficiently.

"After looking into state-of-the-art materials for a variety of protective clothing applications, it became clear that there was potential to achieve a revolutionary improvement in performance if electronics- and optics-related technologies could be successfully integrated into textiles," said textile technologist Carole Winterhalter. 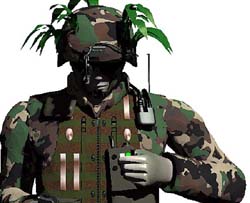 Although the battle dress uniform provides camouflage and environmental protection, it may also become a wearable electronic network that transports data to and from a soldier's wearable computer.

Like a local area network, soldiers' personal area network would open new opportunities for battlefield lethality and survivability. The network could be made to detect chemicals, prevent friendly fire casualties by providing positive identification, and monitor a soldier's physiological condition.

The first step in developing the PAN was also the program's first success. Natick and small business partner Foster-Miller Inc. of Waltham, Mass., developed a textile-based version of a universal serial bus cable.

Researchers picked the USB because it is a commonly used item, for instance, in desktop and laptop computers. The relatively stiff and heavy USB cable -- often the size of a computer mouse cord -- was manufactured into a thin, flexible and wearable cable with flat, low-profile connectors. It can be integrated into clothing and is currently under consideration in an advanced combat uniform program.

"After testing and evaluation, it actually functioned like a normal USB," Winterhalter said. Learning that power and data can be sent through textiles, the next step is to determine how and where to place the sensors that will transmit information to the soldier's computer. She said sensors could be attached or embedded into the material or be the fabric itself, and could be located on the inside, middle or outside layer of the clothing system.

"The technical feasibility was proven  , so now we're going to survey other military-based electronic, wearable systems currently under development, map the electronic architecture," she said. "Integration of both the electronic network and sensors also presents new design issues and human factors issues of safety, comfort, performance and durability."

The success of the wearable cable led to other applications, such as a wearable, flexible and textile-based squad-level antenna for a tactical communications radio. The antenna was integrated into the Modular Lightweight Load-carrying Equipment vest. Its advantages over standard 30-inch-long whip antennas are they conform to wearers' bodies and don't compromise their silhouettes.

The antenna vest is a joint development effort with the U.S. Communications and Electronics Command, and it supports their advanced antenna science and technology objective. Natick developed the antenna and led the integration efforts while CECOM developed the electronic switching devices. A performance evaluation of the vest will be conducted this spring with a follow-on safety effort in the fall.

The technology developed under the SBIR program that supports both the cabling and antenna efforts was patented and licensed to Malden Mills in Lawrence, Mass. The company wanted to make an unusual fleece heat blanket and succeeded by folding ribbon-like Natick power buses under the fabric bindings at each end and connecting them to heating elements made of superfine conductive fibers knit right into the fleece material.

She said Malden Mills wanted an electric blanket without the stiff, bulky wires traditionally used. The new blanket is lighter, more flexible and can be machine-washed and dried. Plugged in, it warms evenly using the same amount of power as a 100-watt light bulb.

"It's a successful example of military research in electro- textiles that's been applied to the commercial market," Winterhalter said. "We were amazed and pleased with how quickly the technology was transferred and used."

Defense Officials Defend Using New Bomb
Despite reports to the contrary, defense officials said they have not violated the law of armed conflict during the war on terrorism.

Some media organizations, including The Atlanta Journal-Constitution, have questioned the Air Forces use of the BLU-118/B "thermobaric" bomb on March 5 against al-Qaida fighters in a cave near Gardez, Afghanistan. Critics have claimed the bomb qualifies as a weapon of mass destruction because it is designed to detonate in two stages.

That claim is untrue, officials said.

The design of the BLU-118 allows for greater internal blast effectiveness, said Lt. Col. Thomas Ward, program manager of the hard target defeat branch of the Defense Threat Reduction Agency. "This is done with a single-stage detonation, not in two stages as hypothesized by the articles," he said. 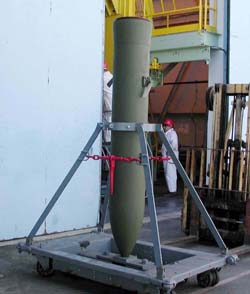 "Many explosive fills try to balance the fuel and oxidizer within the same mix," Ward said. "The general principle behind the new weapon is to carry a higher percentage of fuel, and attempt to use available oxygen from the target area to add to the reaction, resulting in a higher overpressure."

Other reported inaccuracies were caused in part, Ward said, by wrongly comparing the BLU-118 to a dissimilar Russian weapon. The Russian weapons used during its occupation of Afghanistan and, more recently, in Chechnya are more similar to a fuel-air explosive. These fuel-air bombs relied on a mist of liquid explosives to provide a secondary detonation.

The United States used a two-stage fuel-air explosive weapon, the BLU-82, in Vietnam. During the first stage, the fuel was spread and combined with oxygen in the atmosphere. A second stage detonator then ignited the fuel-air mixture. Unlike the BLU-82 or the Russian weapons, the BLU-118 uses a solid explosive that is detonated without previously having been dispersed and mixed with air, thereby making it a single-stage weapon.

The BLU-118 uses its fuel-rich composition to release energy over a longer period than traditional explosives, thereby creating a longer-duration blast effect when detonated in a confined area, such as a cave.

"The blast pressure from a traditional bomb explosive material starts strong but dissipates rapidly, which can result in relatively limited base effects deep within tunnels," said Lt. Cmdr. Donald Sewell of the office of the Secretary of Defense for public affairs.

"The blast pressure of a thermobaric weapon, which combines a smaller amount of traditional explosive material with fuel enriched compounds (mostly aluminum), begins less strongly but builds within a confined space and extends over longer duration," he said.

This increased blast pressure produces destructive effects over much greater distances within a tunnel or cave.

An added benefit to the thermobaric bomb, Sewell said, is reduced potential for collateral damage when detonated outside of a confined space.

"As with all new weapon acquisitions and modifications, use of the BLU-118 was reviewed and found consistent with all international legal obligations of the United States, including the law of armed conflict," Sewell said. (Source: Air Force Print News)